Rackspace and the Complex Impairment Charge

Calcbench is always game to analyze an impairment charge, and this week cloud services provider Rackspace Technology ($RXT) served up a good one. Let’s take a tour of what the company had to say.

First, the company reported underwhelming numbers generally. Revenue for the third quarter was $787.6 million, up a rather meager 3.3 percent from the year-earlier period. Meanwhile, cost of revenue rose 9.4 percent, meaning gross profit fell 10.6 percent to $207.1 million.

For comparison purposes, cloud services rival Amazon.com ($AMZN) saw revenue in Amazon Web Services rise by 27.4 percent in the same period; and Microsoft ($MSFT) saw revenue rise 20.2 percent in its Intelligent Cloud division. So Rackspace has been battling some big, fierce competitors, and not doing so well.

Anyway, back to the impairment charge. In its Company Overview disclosures, Rackspace described how the company “experienced a sustained decline in our stock price” — about 37 percent, from $7.14 in July to $4.46 by late August, and that’s down from $16.50 at the start of the year).

That prolonged decline triggered an impairment review, and Rackspace ended up declaring several individual impairment charges that altogether were $436.2 million:

As we mentioned, the total for those impairments is $463.2 million, which contributed to an overall operating loss of $476.7 million and a total net loss of $511.7 million. We get it, most of that loss is an ephemeral, one-time thing due to the goodwill impairment charge — but that’s still a lot of red ink.

Were those impairment charges warranted? For a sense of that, we looked at Rackspace’s segment reporting. See Figure 1, below. 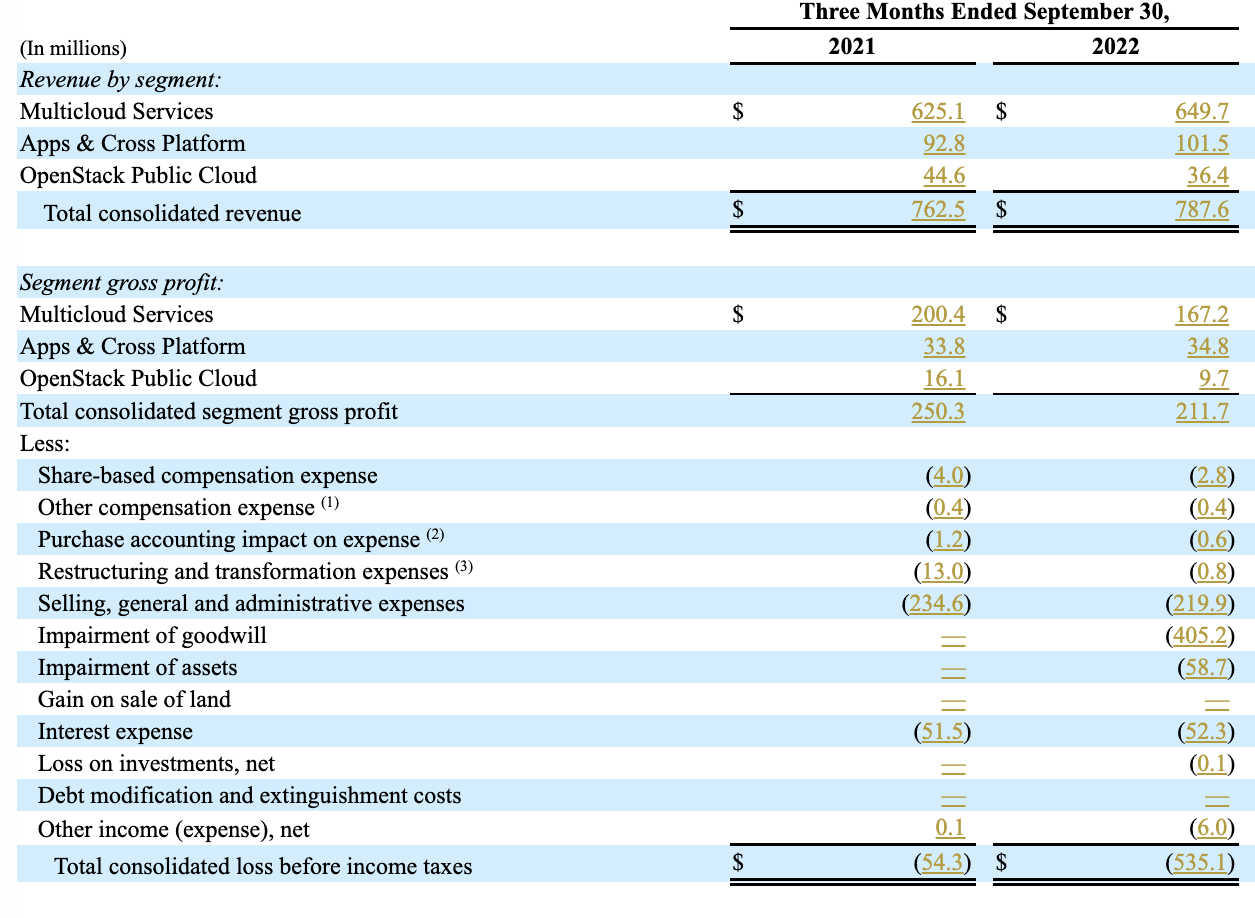 Both the Multicloud Services and the OpenStack Public Cloud units saw declines in gross profit, OpenStack particularly so. Revenue was at least growing for Multicloud, which is more than we can say for OpenStack.

We were also intrigued by one more item Rackspace disclosed as a Subsequent Event. Emphasis is our own:

In October 2022, we announced our intention to sell our current corporate headquarters facility located in Windcrest, Texas and relocate our corporate headquarters to leased office space in San Antonio, Texas. Due to current real estate market conditions and the unique nature of the facility, the ultimate sale price of the property will likely be below its current net book value resulting in the recognition of an impairment charge or a loss on the sale, the amount of which could be material.

That “current real estate market conditions” raises an interesting point. Lots of businesses try to cut costs by selling real estate they own and then leasing space elsewhere. With interest rates so high, however, real estate values are starting to fall. Rackspace might not be the last one to find that the value of property it owns isn’t what people were expecting — and that could lead to more impairments in the future.