Yes, we know — everyone in the universe is paying attention today to Elon Musk and his $44 billion deal to take Twitter ($TWTR) private. Calcbench, however, just noticed an intriguing disclosure from one of those other social media companies out there: Snap ($SNAP), parent company of Snapchat.

Snap filed its Q1 2022 earnings report late last week, filled with all the usual  numbers. Revenue rose 38 percent from the year-earlier period, but the pioneer in nude selfie technology still posted an operating loss of $271.5 million and a net loss after taxes of $359.6 million.

The number that most caught our eye, though, was in the Statement of Cashflows.  In the first quarter of 2022, SNAP bought stock worth a little over $1.3 Billion. 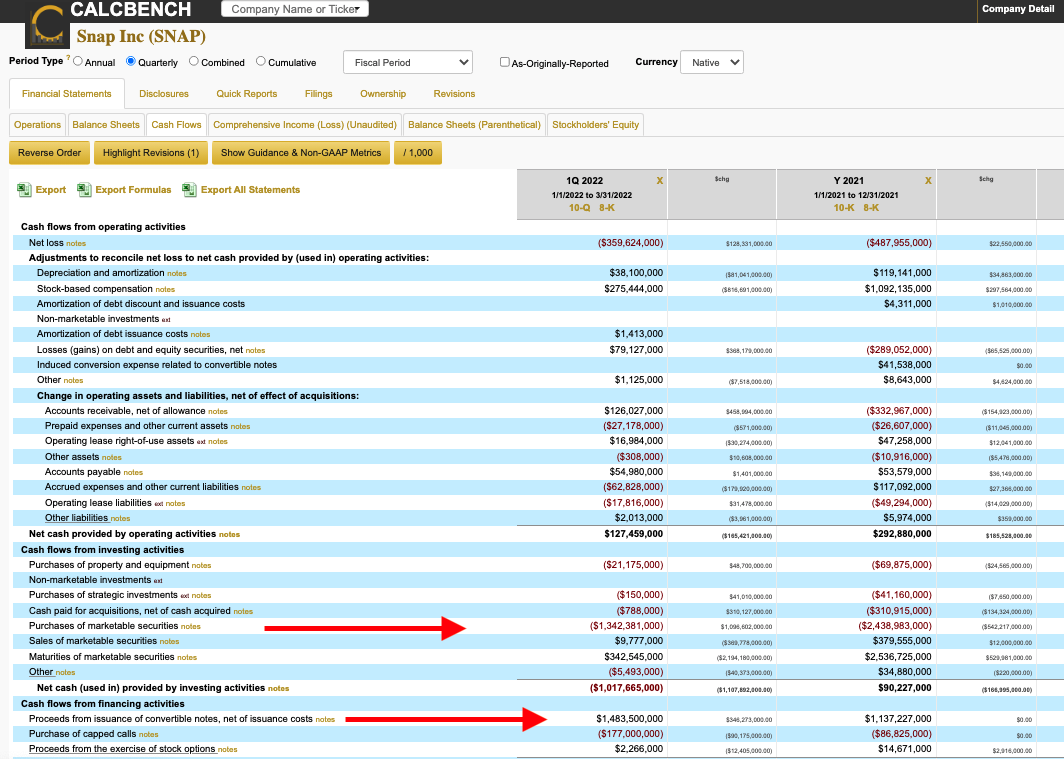 Realizing that they didn’t pay cash for the stock, we wanted to learn more and noticed the increase in Convertible Senior Notes on the balance sheet. 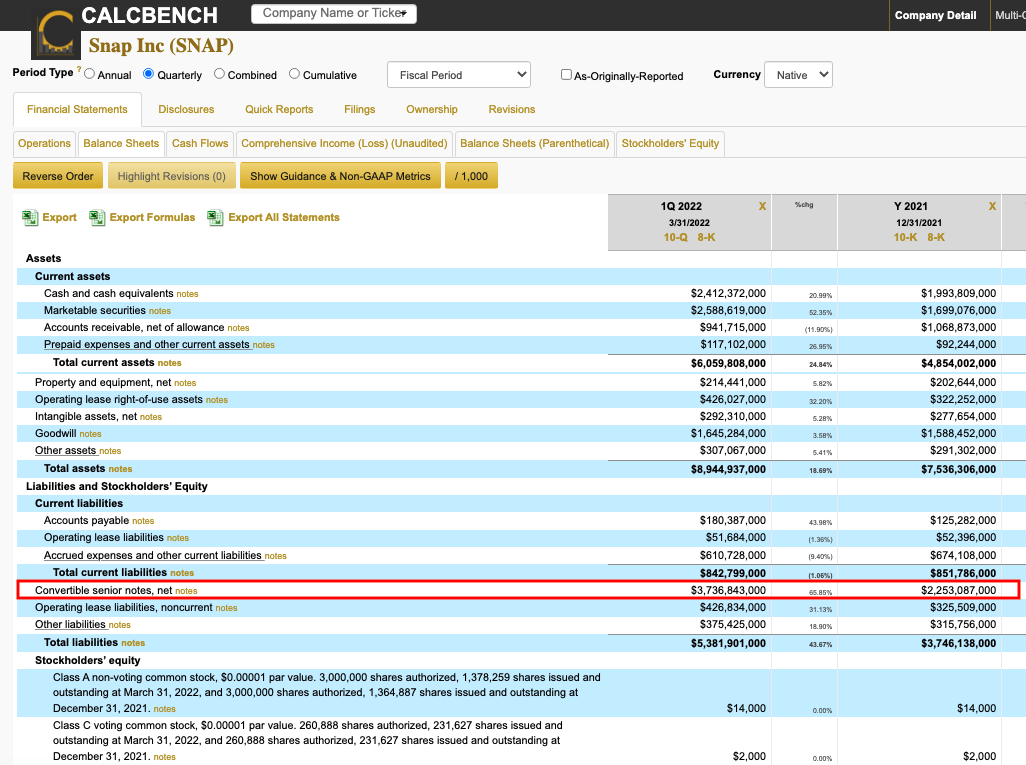 Going through Snap’s footnotes, we stopped short at THE disclosure about convertible notes. In February 2022, Snap closed a private placement of $1.5 billion in convertible notes due in 2028, with an interest rate of 0.125 percent per year.

That part alone is impressive; Snap secured $1.5 billion in cash with an interest rate so low it’s essentially free money. Then came this statement:

So Snap can convert those notes into shares — at management’s sole discretion, mind you —  with a strike price of $56.34. That is considerably higher than Snap’s closing price lately, around $30 per share.

We have so many questions. First, who did this deal? Who believes that Snap, a company that has never printed the bottom line of the income statement in black ink, is on an upward trajectory? When Snap says it has an “initial” conversion rate of $56.34 per share, does that mean the deal has other possible conversion rates? If so, what are those trigger events?

Snap’s disclosures about the deal don’t say much. The company did include this paragraph explaining when Snap might convert some of the notes into cash, rather than shares:

We may redeem for cash all or any portion of the 2028 Notes, at our option, on or after March 5, 2025 if the last reported sale price of our Class A common stock has been at least 130 percent of the conversion price then in effect for at least 20 trading days at a redemption price equal to 100 percent of the principal amount of the 2028 Notes to be redeemed, plus accrued and unpaid interest, if any.

For the record, 130 percent of a $56.34 conversion price is $73.24 per share. Again, however, notice that the disclosure refers to the conversion rate then in effect. So our question about other conversion rates, and possible trigger events for that, remains valid.

We should also note that Snap’s share price was $32.54 at the end of January and $39.94 at the end of February; so these mystery investors were buying into a rising stock. Plus, Russia’s invasion of Ukraine happened on Feb. 24. It’s possible that the investors bought these convertible notes earlier in February, when most people believed Russia wouldn’t invade Ukraine. Then it did, and the markets have been in turmoil ever since. You can’t blame the investors for that external event and its bad timing.

Snap did file a template agreement for the convertible notes on Feb. 11, but it’s only a sample agreement that includes no buyers’ names and lots of blank spaces, including blanks for the exact date of the transaction. Interesting, but not that helpful.

Figure 1, below, shows Snap’s share price history over the last five years. The company did see a remarkable run-up in price from late 2020 into late 2021 (was there a nude selfie craze we missed?), but then the price dropped precipitously. So a share price in the mid-50s isn’t unheard of — but Snap does need a lot of enthusiasm over future earnings to achieve it.

Then again, as this convertible notes placement suggests, at least some people believe in the company. We’ll see. 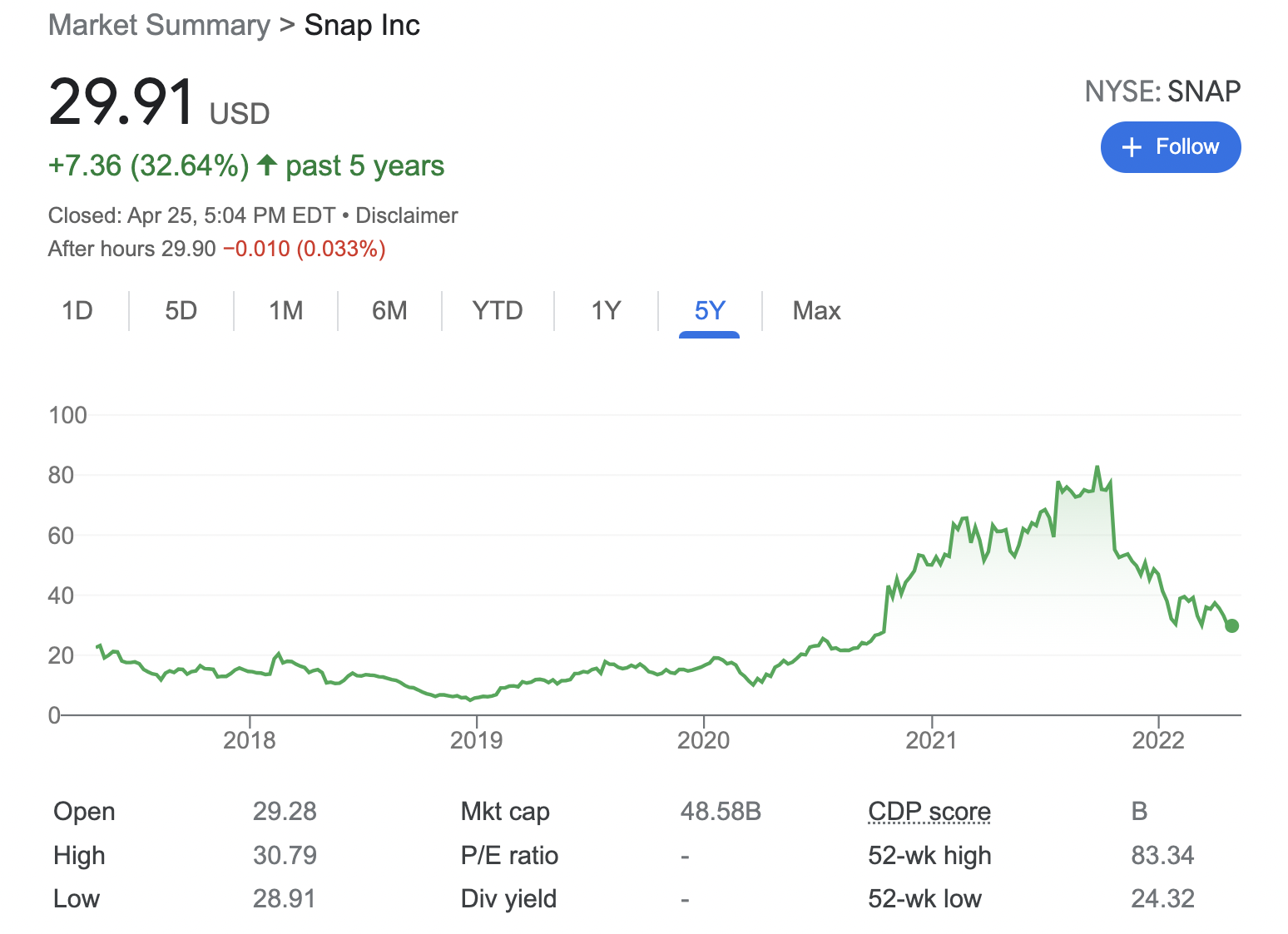