Two years ago Calcbench published one of our most popular posts ever: a study of how much time firms took to proceed from their fiscal year-end, to filing an earnings press release, to filing their full Form 10-K report.

A lot can change in two years, so we decided to repeat that analysis with firms’ 2019 form 10-K filings. After crunching the numbers for thousands of filers large and small, one conclusion stands out: Firms are taking more time to file their disclosures.

Table 1, below, presents the change in filing times for 2017 and 2019 reports, across the major categories of filer status.

(We should note one significant change. Two years ago there was a fourth category of filer, the smaller reporting company. The Securities and Exchange Commission subsequently consolidated “SRCs” and non-accelerated filers into a single category. We noted this because the SRCs might explain why non-accelerated filers had such a large increase in filing times.)

Why are firms taking more time to file their disclosures? We can’t help but wonder whether coronavirus was one reason, given the disruption it caused to countless firms earlier this year. It’s also true that several significant accounting rules have undergone major revisions in the last several years, such as revenue recognition and leasing costs. Those revised standards have added complexity to what firms need to disclose, and figuring that out can take more time.

A Closer Look at Large Filers

We also charted the number of days from fiscal year-end (FYE) to 8-K earnings release and to 10-K filing for large filers. The result is this scatter-plot chart below, Figure 1. 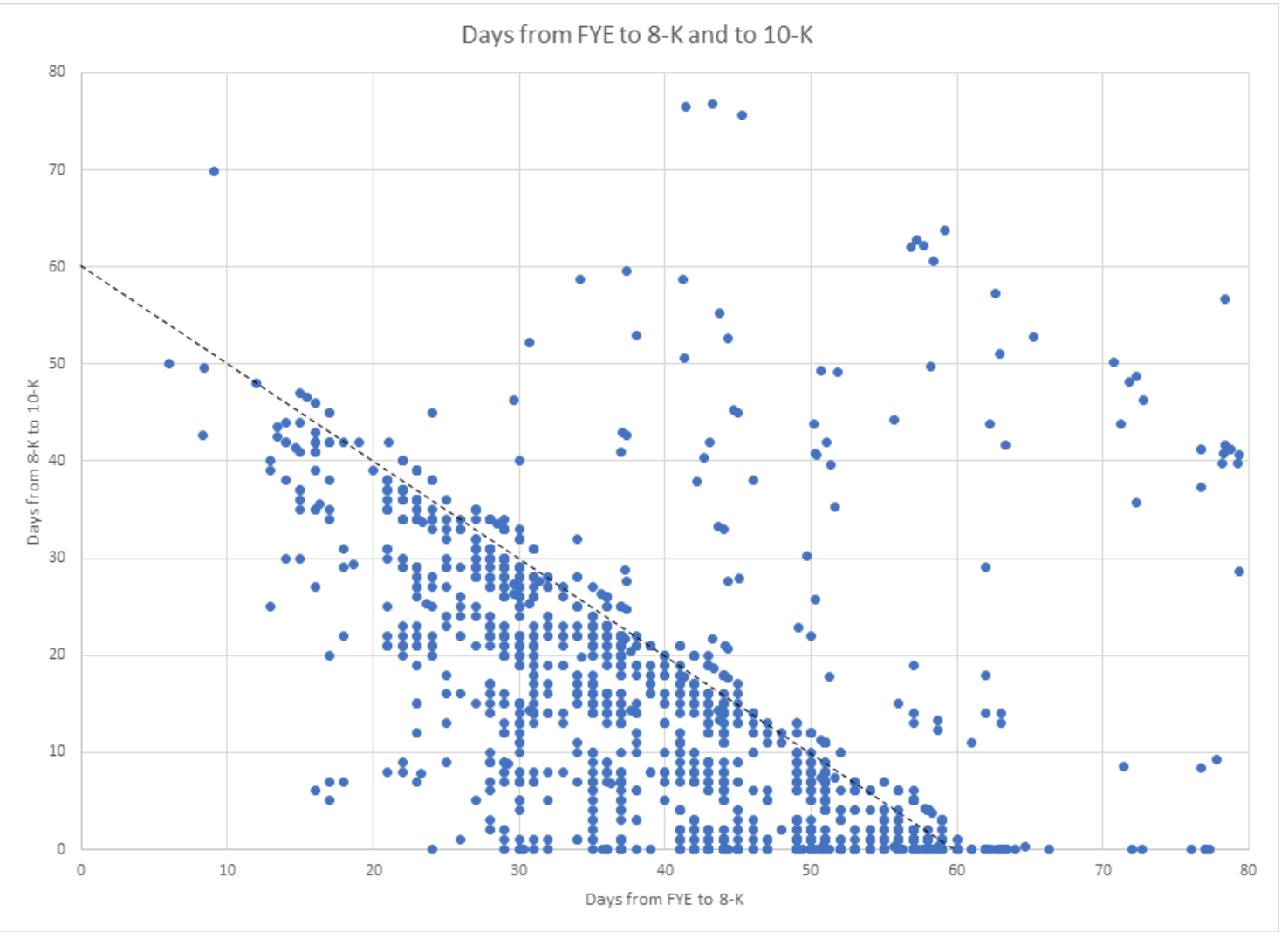 All large accelerated filers must file their 10-Ks within 60 days of year-end. That timeline is measured along both axes — so any blue dot along the very top or the far right of Figure 2 is a late filing. (We estimate about three dozen in Figure 1.)

What’s interesting is that if you look back to this same chart for 2017 filings, decidedly fewer firms were beyond the 60-day deadline. See Figure 2, below, shamelessly stolen from our first post in May 2018. 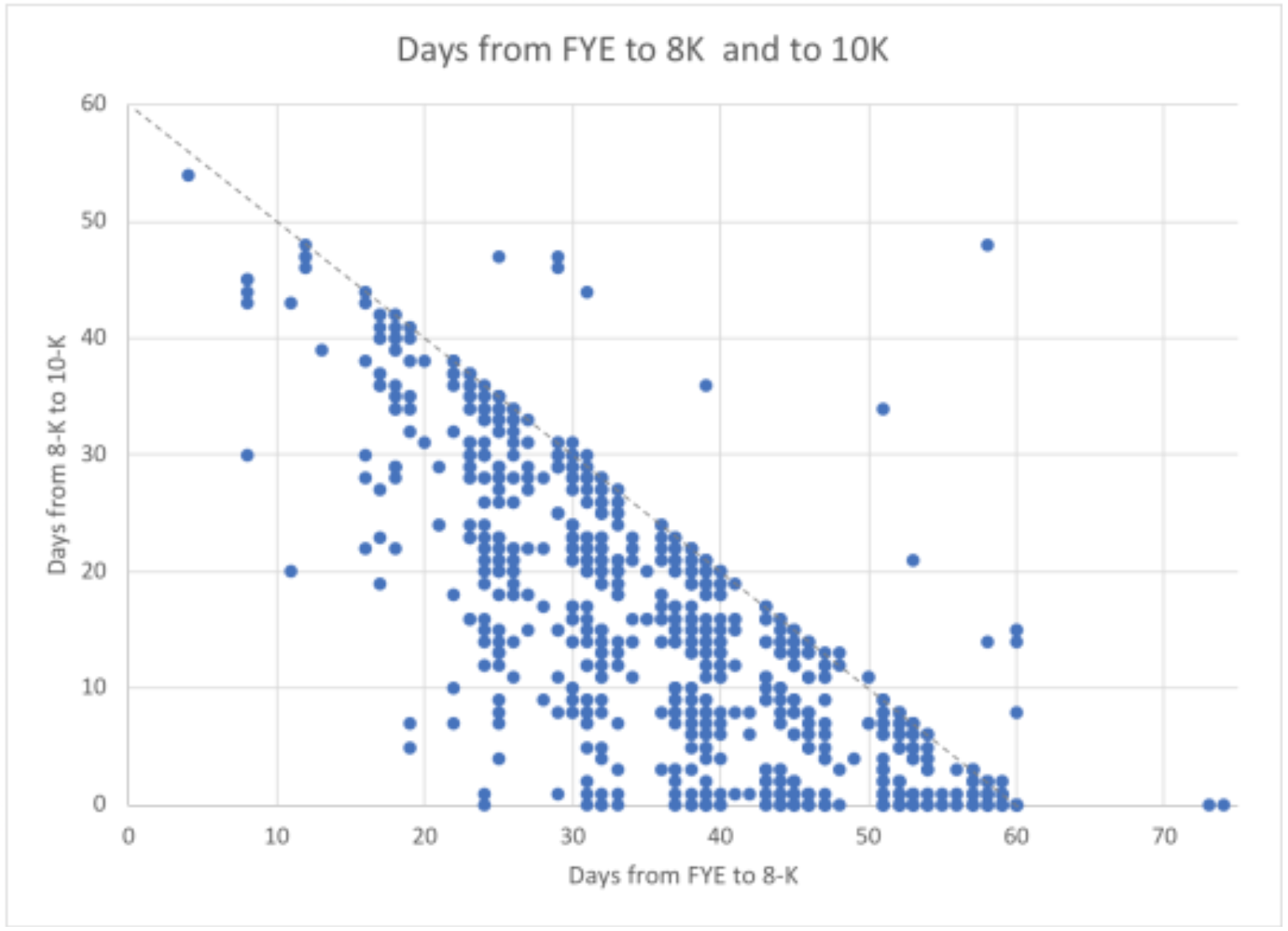 In both charts, we see most firms crammed near the corner along the x-axis. That means most firms filed their earnings releases well after their FYE, and then filed their 10-K quickly after that.

But clearly only a handful of firms filed their 2017 annual reports after the 60-day mark in Figure 3, compared to the several dozen in Figure 2. Hmmmm.

Nobody can draw broad conclusions about that discrepancy just from this data. You’d need to research each firm individually using our Interactive Disclosures database, which might offer hints about disagreements with auditors or unreliable data or lord knows what else.

Still, the discrepancy is there. It also supports our first conclusion, that firms are taking longer to file earnings releases and 10-Ks. Presumably that would lead at least some firms to stumble into the late filing zone.

Food for thought as we all keep waiting for those latest filings to arrive.