Calcbench now has enough 2019 data from the S&P 500 to start preliminary trend analysis on, well, all sorts of things. So our first pass is a quick take on spending for property, plant, and equipment.

To keep things simple, we pulled the numbers on 76 firms in the S&P 500 that reported “payments to acquire PPE” for 2019 and the prior three years. Then we compared that spending as a percentage of total revenue.

Bottom line: that spending did decline mildly last year compared to 2018, but is still a fair bit above spending in 2016 and 2017. See Figure 1, below. 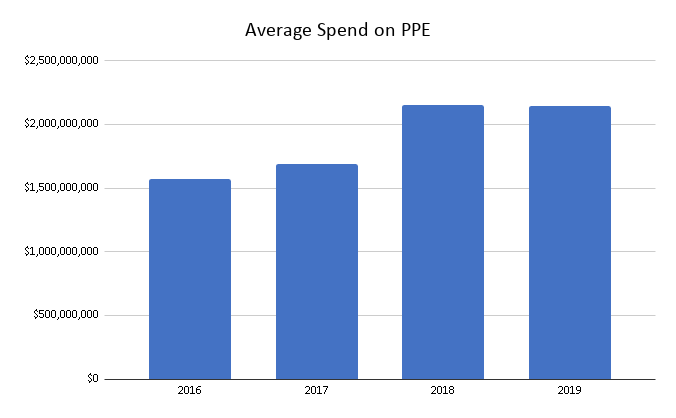 What can we extrapolate from these findings? To be fair, not much. We cannot say capex spending is in decline; firms report capex in several ways, and this sample only looks at 76 companies. That’s a tiny sliver of the whole.

But by this precise definition, among firms that collectively had $2.45 trillion in revenue last year, which is nothing to sneeze about — yes, outlays for PPE declined last year for the first time in at least four years.

We also examined PPE spending as a percentage of total revenue. Again, that number slid downward last year after three years of small but steady increases. See Table 1, below.

And lastly, while the average percentage spend arrived at 6.64 percent, some firms devoted quite a bit more of their revenue to acquiring PPE. Table 2 shows the top 5.

In the fullness of time Calcbench will take a much deeper dive into capex spending across all industries, as we do just about every year. For now, you can conduct your own research by visiting our Multi-Company search page, selecting a group of firms to research, and then using our standardized metrics or XBRL tag search fields to find the precise data point you want to study.