Like so many others who study financial data and follow financial news, Calcbench has been fascinated lately by special purpose acquisition companies — more commonly known as SPACs.

What are these financial reporting contraptions? How many are there? What financial disclosures do they make, and how can one study those disclosures for useful financial analysis? How much do the people behind SPACs get paid?

Calcbench decided, therefore, to launch a short series on this blog looking at financial reporting issues related to SPACs. Because these firms do indeed submit financial data, which means we do indeed have that data available for our subscribers to find and put to use.

What are SPACs, exactly?

SPACs are publicly traded holding companies, and more commonly known as “blank check companies.” They have no substantive operations; they exist to hold money in trust from investors, and then go hunting for a private operating company to acquire.

Once that acquisition is done — presto! The newly merged entity is a publicly traded operating company.

In theory, SPACs are a faster, simpler way for private companies to go public than a traditional IPO. Of course, SPACs also make gobs of money for the executives who put the SPAC and ensuing acquisition together (known as “sponsors” of the SPAC) and often for the entertainers, athletes, and other famous people who serve as “advisers” to the SPACs.

How many SPACs exist?

That’s a good question, because a legion of firms have announced themselves as SPACs over the last 18 months or so.

One good place to begin is with SIC codes. SPACs are category 6770. When we set up a peer group for all firms in that SIC category as of Dec. 31, 2020, we found 189 “live” firms that had submitted current financial statements — everyone from 5:01 Acquisition Corp. ($FVAM) to Zeta Acquisition Corp. I ($ZETAI).

That said, it’s worth remembering that plenty of firms announce that they’re forming a SPAC, and even file an S-1 registration statement with the Securities & Exchange Commission. Then… nothing. They ghost the capital markets, never to file a statement again. So when we say “189 blank check companies in Q4 2020” or “358 firms in Q1 2021,” we’re talking about firms that have filed quarterly statements for that period and are keeping up with their disclosure duties.

How much money do these SPACs have?

Lots, and most of it raised only within the last year or so. We used our Bulk Data Query tool to track total assets and average assets for all firms under SIC code 6770, from the start of 2019 through first-quarter 2021. Figure 1, below, tells the tale. 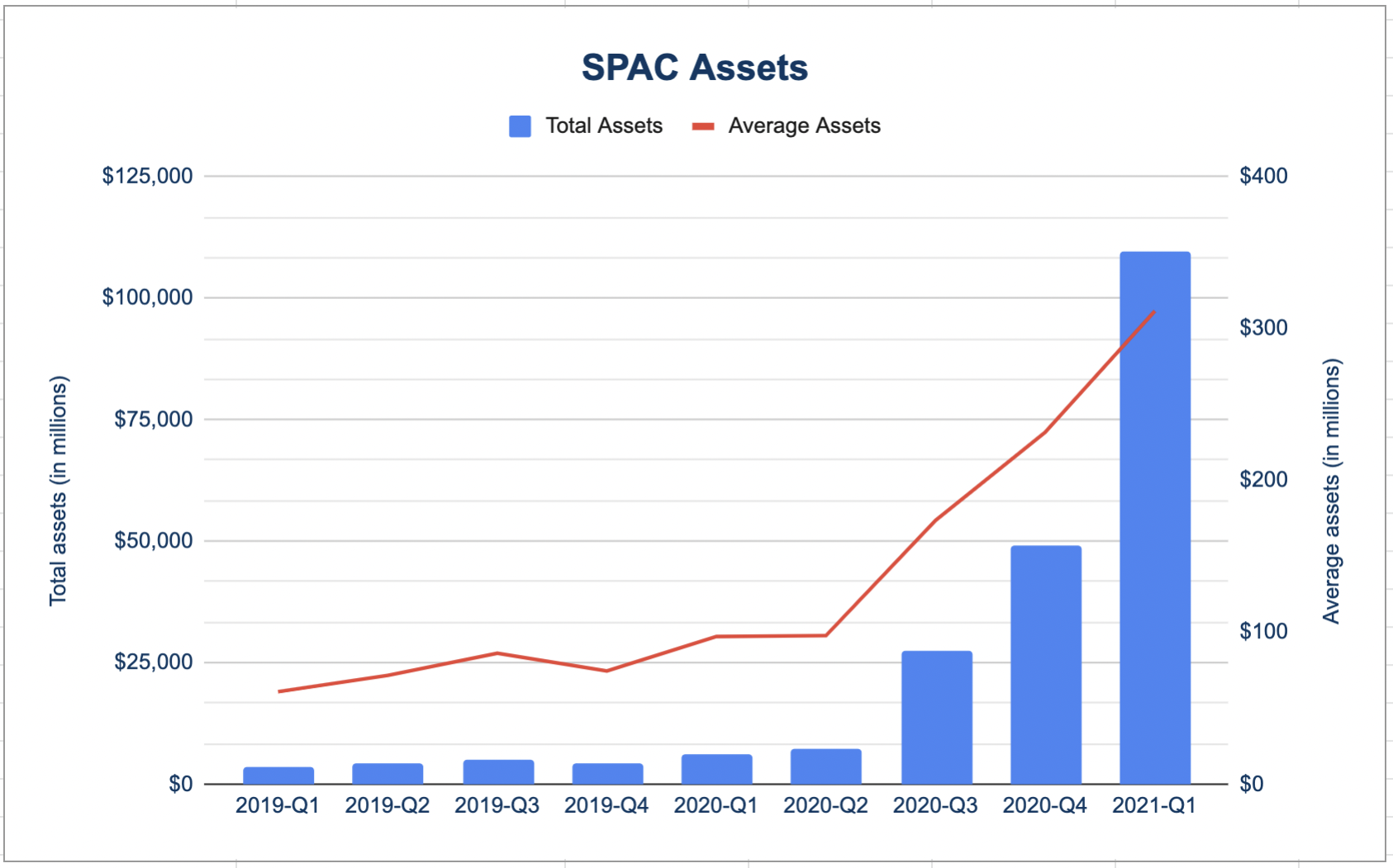 We also saw the number of large SPAC firms (defined as having $1 billion or more in assets) rise from three at the end of 2020 to eight at the end of Q1 2021. Here are the largest 10 firms at end of the quarter: 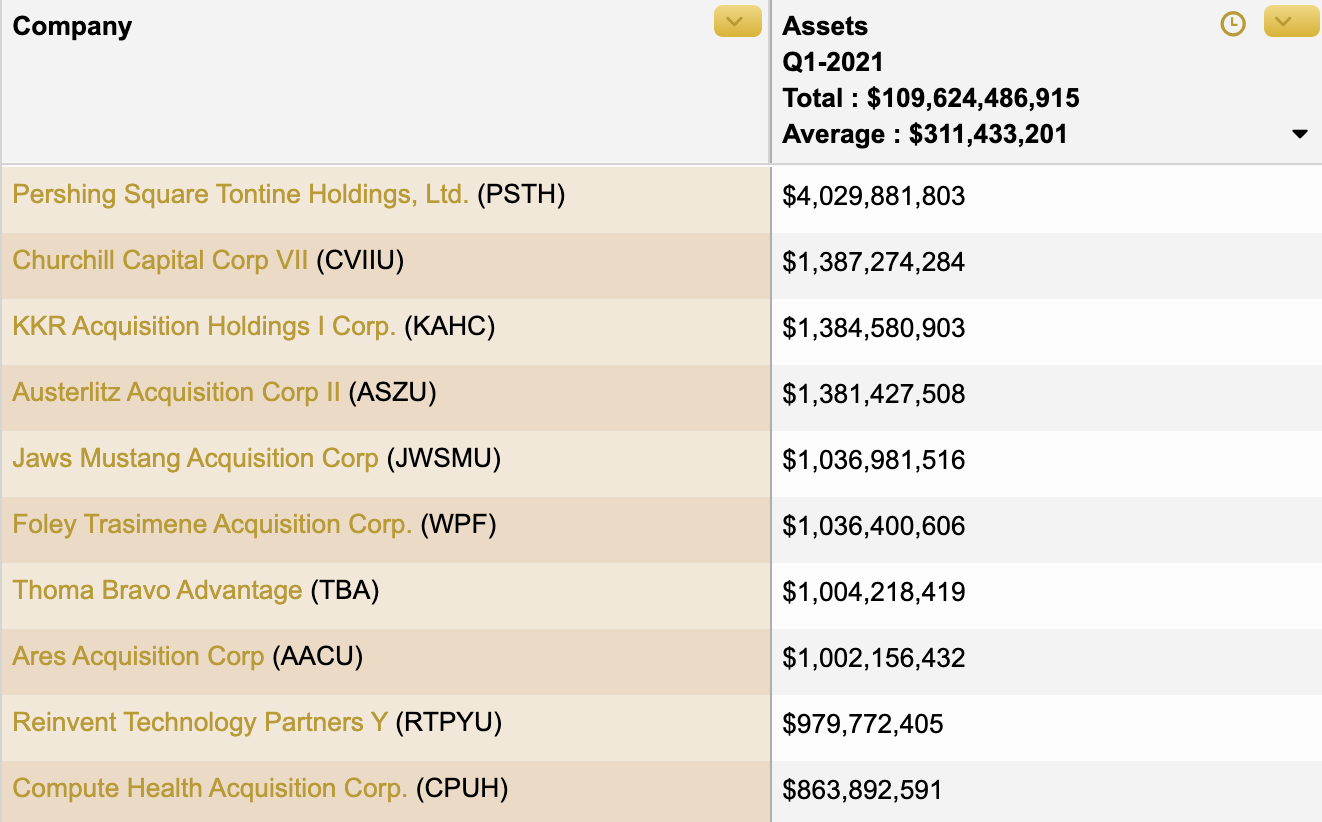 And what do SPACS do?

As we said earlier, they raise funds from investors first, and then go acquire an operating company later. Many SPACs have a specific theme — say, only biotech companies, or only European businesses, or only businesses owned by women or developing ESG products or whatever.

The crucial element is that SPACs have two years to find their acquisition target; if they haven’t closed a deal by then, the SPAC managers must — horror of horrors — give the money back to the investors.

Which creates all sorts of pressures to close deals quickly. Which we will explore in our subsequent SPAC-tacular series of posts.