We now have a critical mass of fourth-quarter 2020 filings for Calcbench to do another of our quarterly “quick analysis” guides, where we do year-over-year comparisons across a range of financial disclosures, to see how Corporate America has been doing lately.

You can download and read the full analysis if you like. Meanwhile, the headline for Q4 2020, compared to Q4 2019: net income down, revenue down, capital and operating expenses down — but cash is way, way up.

Our quarterly quick analysis is a straightforward exercise. We aggregated the disclosures of more than 2,100 firms, excluding financial firms (whose unusual balance sheet structure distorts the overall picture) and most retailers (whose quarterly periods don’t align with the calendar year). Then we do a year-over-year comparison across 12 major financial disclosures that firms make, to see how this quarter compared to the year-ago period. 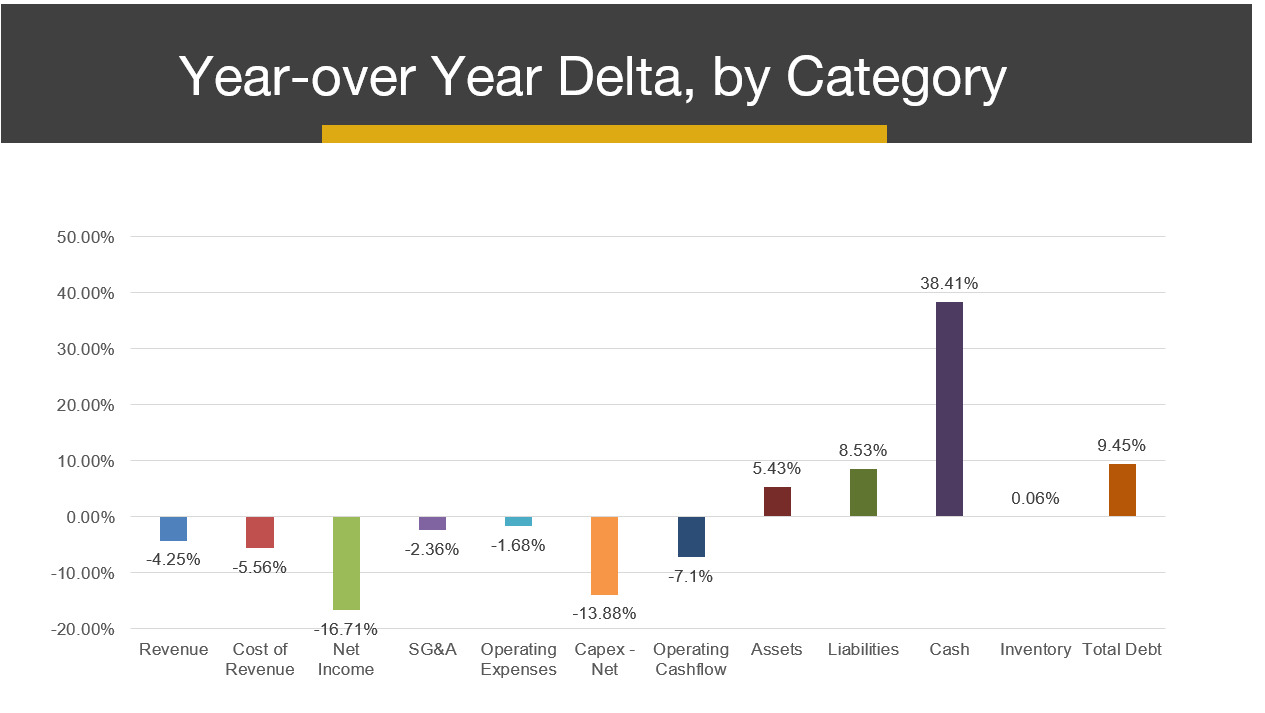 For anyone who can’t quite make out the numbers, the major ones are:

Those numbers shouldn’t surprise anyone. The economy was roaring along in those halcyon days of Q4 2019, so even as economic fortunes recovered over the course of 2020 (just look at our restaurant and airline industry posts from a few days ago), comparing any quarter of 2020 to 2019 was going to look grim. Revenue and net income dropped, lots of firms cut expenses, and lots of firms stocked up on debt so they’d have a sufficient pile of cash to carry them into more rosy times in 2021.

We also did a deeper dive into the 20 largest industry groups according to SIC number. Those 20 industry slices contained roughly 860 firms, 40 percent of our total sample population. Then we did a year-over-year analysis for each financial disclosure.

For example, Figure 2, below, shows the industry breakdown for revenue. As you can see, the two sectors that took the biggest hits were hotels (down 51.5 percent) and oil & gas (down 26.6 percent). 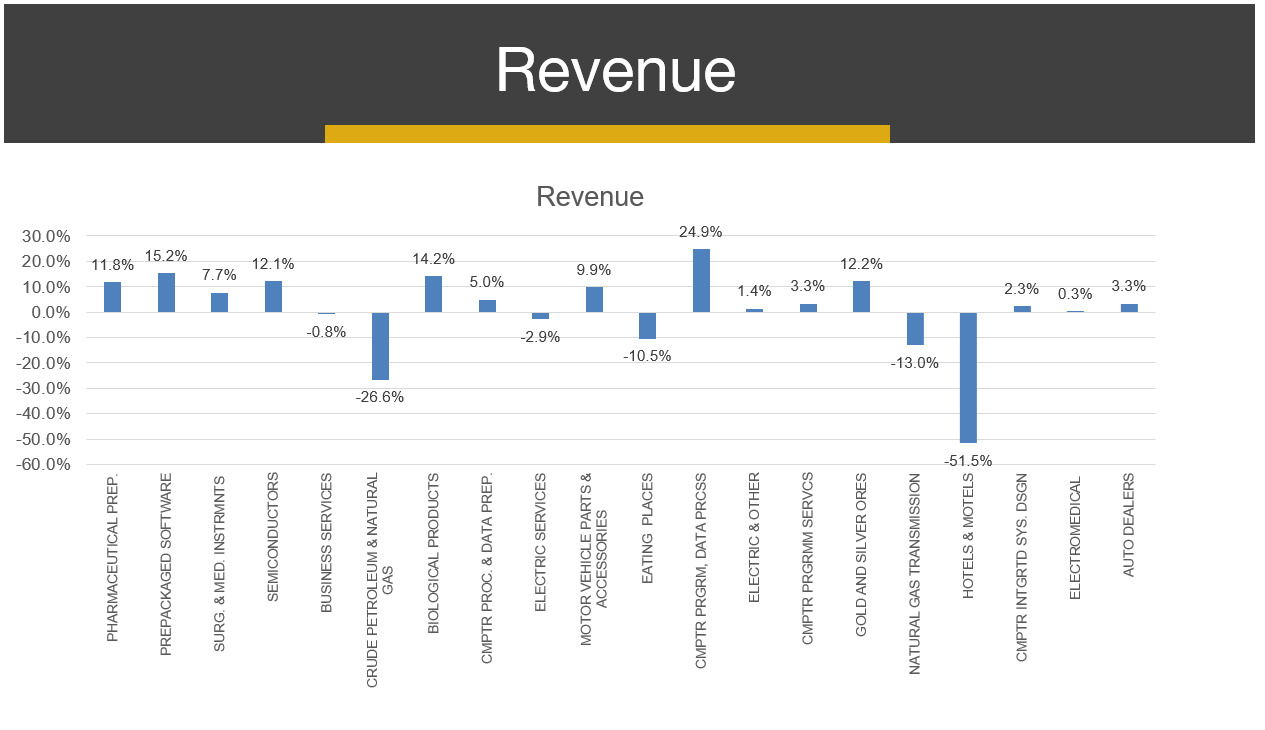 Again, that makes sense, since most of humanity parked the car in the garage and took a staycation for Q4, while a second wave of COVID-19 washed over the Western world.

Figure 3, below, shows the change in net income by industry. Note the jump in computer processing (up roughly 200 percent) and smaller but appreciable jumps in other computer sectors. Such is life when everyone is on Zoom calls, watching Netflix, while placing Amazon orders. 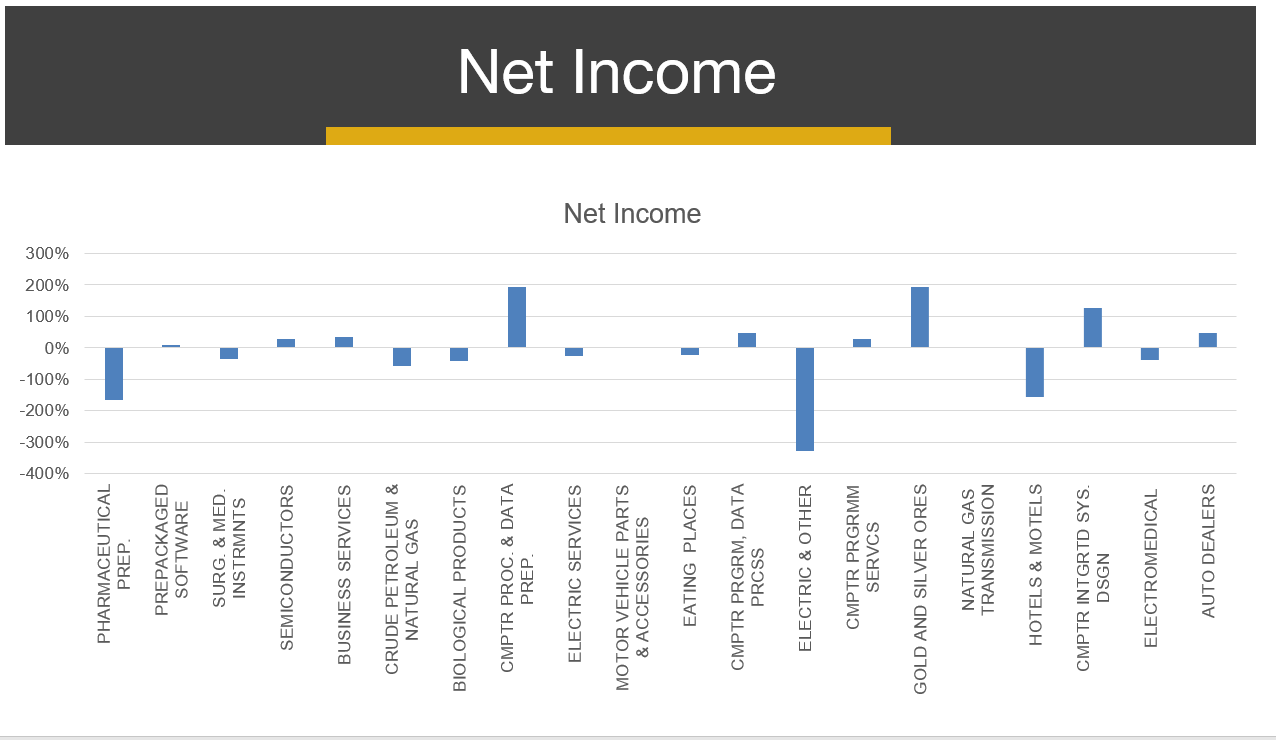 We’ll be back in several more months with our first quarterly quick analysis for 2021, comparing this year’s early numbers to Q1 2020. That should be quite a show. Stay tuned!