The new accounting standard for leasing costs is no longer so new, but its secondary effects on financial reporting still are. Today Acuity Brands ($AYI) gave us one glimpse of that, when it declared an impairment on a leased asset.

What happened? Acuity, which sells indoor and outdoor lighting plus assorted other equipment, filed a rather yucky Q1 2020 report. Revenue down by 11 percent, operating profit down 36 percent, net income down 40 percent. The company also announced the arrival of a new CEO to turn things around.

What caught our eye, however, was a $6.9 million item on the income statement labeled “special charge.” See Figure 1, below; with the line-item highlighted blue. 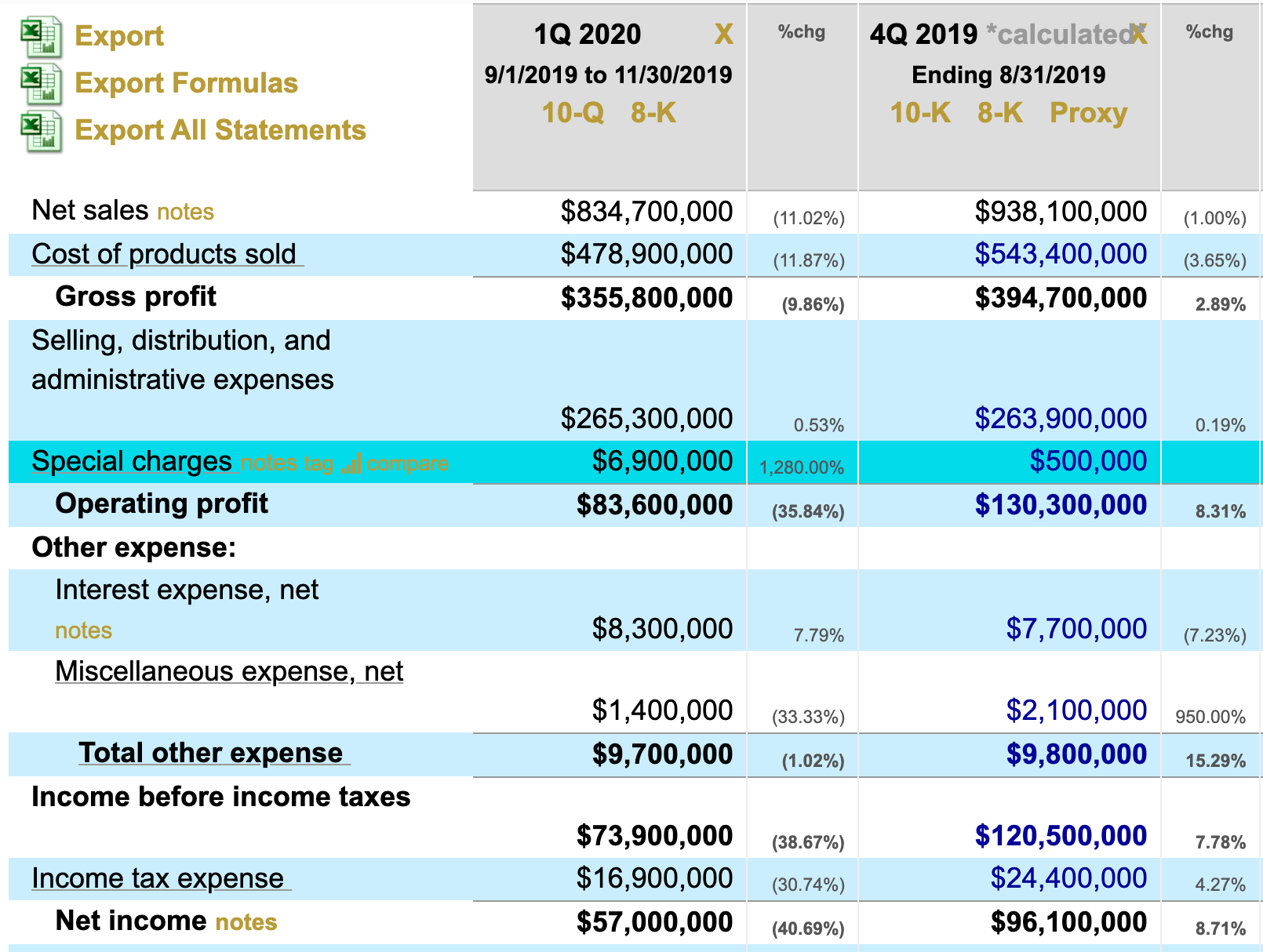 That $6.9 million was far larger than any other special charge Acuity has reported lately, and it’s always wise to look closely at special charges anyway. So we did, using the ever-handy Calcbench Trace feature.

In the footnotes, we then found this disclosure from Acuity:

In other words, Acuity is closing a few facilities and that will cost it $6.9 million. Acuity goes on to say that $5.1 million of the charge will be related to severance costs, and the company had been accruing reserves to cover that amount — but the remaining $1.8 million is indeed an impairment of the leased facility Acuity had been using.

Why Is This a Big Deal?

This is a big deal because it demonstrates that the new lease accounting standard, which went into effect last year, can indeed affect earnings. Sure, in Acuity’s case this impairment isn’t a material amount of money — but until last year, you wouldn’t see something like this at all. Now you can.

The standard, ASC 842, requires companies to list their leased assets — commercial stores, airport gates, office equipment, data storage facilities, and so forth — on the balance sheet. The costs of the leases are listed as liabilities, the value of the leased items listed as assets. (We discuss all these issues at length in several white papers on our Research Page, if you want to know more.)

Like any other asset, however, that means the value of those leased items could fall, and the company would therefore need to declare an impairment. When that happens, the impairment is reported as a charge against earnings.

This happens with goodwill assets on a regular basis and sometimes with other intangible assets as well, so the idea isn’t new. It’s just expanding to a new type of asset: operating leases.

How common will this be? That’s hard to say right now. We’re not sure any other company has reported a charge like this. In theory, however, an impairment to leased assets might arise if a company signs a long-term lease for something and then economic circumstances around using that item change dramatically.

For example, a large bookseller might have signed a 20-year lease for commercial stores in 2011, and by now Amazon has whittled away the value of those stores — and if the locations are in crumbling shopping malls, who else is going to take that space off the bookseller’s hands before the 20-year lease expires in 2031? That’s how the lease accounting rule could end up forcing companies to serve up an earnings surprise.

Another question is whether these impairments would ever be material. In Acuity’s case, the impairment isn’t; even without it, the overall 10-Q numbers would still be pretty gross.

Still, for devotees of financial reporting, Acuity’s disclosure is a rare bird. We’ll keep looking to see whether any more fly by.