The Lord works in mysterious ways, and sometimes so does the goodwill line item on the corporate balance sheet. Case in point: Cisco Systems ($CSCO), which filed its annual report last week and included an interesting disclosure about its goodwill assets — if you were ready to dig for it.

The item that caught our eye was Cisco’s disclosure about acquisitions that happened in its fiscal 2022, which ended on July 30. The company reported three acquisitions in the year at a total cost of $364 million. The disclosure was this:

Do you see what’s missing from that picture? Cisco never mentions the names of the companies it acquired.

Yes, we understand that as a practical matter those acquisitions aren’t material to a company as large as Cisco ($51 billion in sales for 2022), so the company has no particular need to disclose those names. But of that $364 million spent on acquisitions, $332 million was allocated as goodwill. That’s more than 90 percent of total purchase price allocation.

Put another way: Cisco ladled $332 million of goodwill assets onto the balance sheet, and from the financial statements, you can’t determine what investors got in exchange. How did those deals help Cisco strategically? What purpose did the deals serve? We don’t know.

At least if the company added $332 million in property or equipment or licensing agreements, someone could inspect those assets to see whether Cisco got a fair price. Goodwill is as ephemeral as an asset can be.

Intrigued, we started tracing through Cisco’s previous quarterly filings for the year (by using our “see previous period” option on our Interactive Disclosures page, of course). It turns out that Cisco never identified any of those three mystery acquisitions by name in the 10-Q reports, either. You can see that Cisco did one deal in the first quarter, another in the second, and the last in the third quarter; but not once did Cisco name the targets it was acquiring — but nothing more. 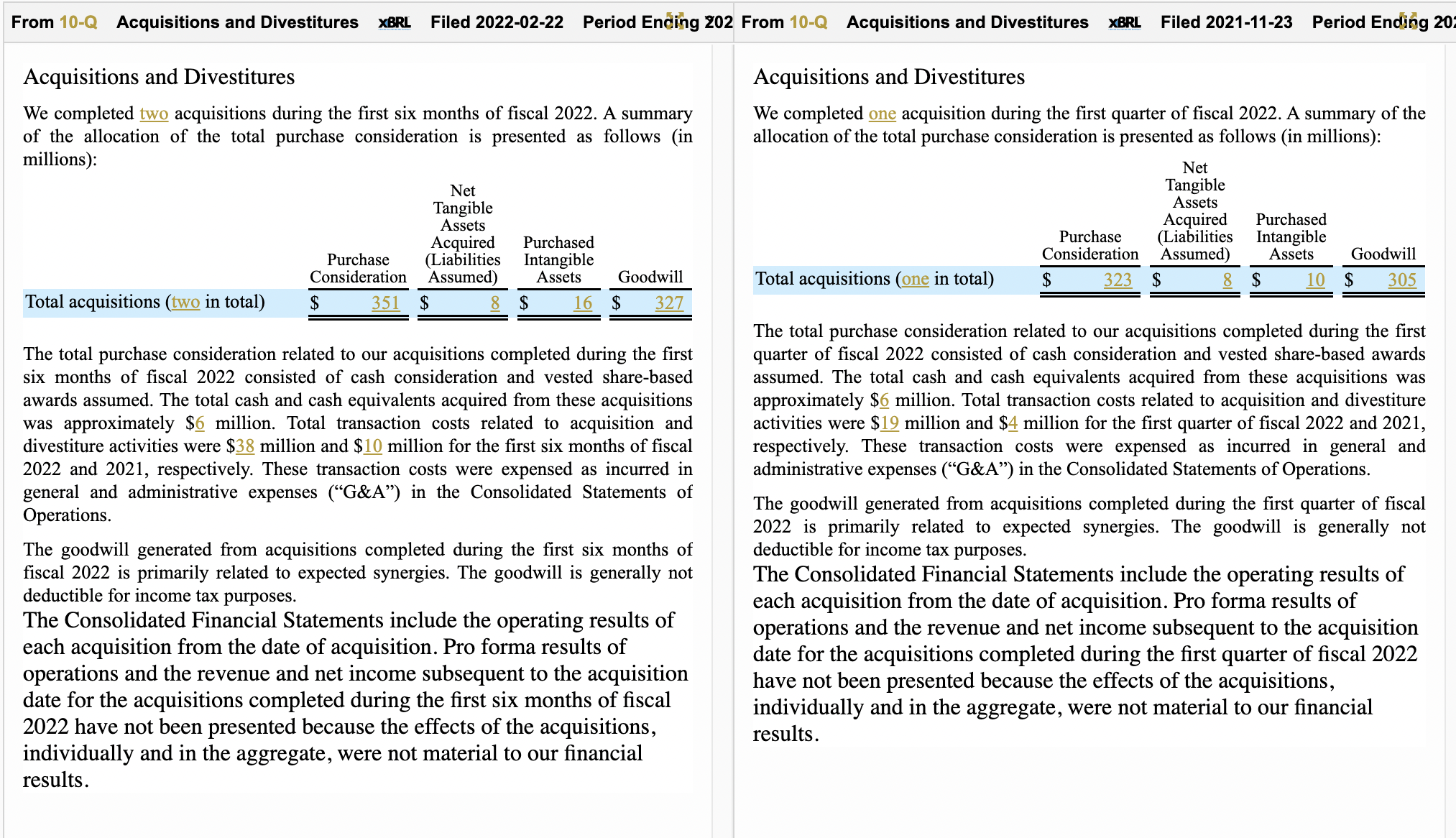 Now we have a bit more clarity. The first-quarter acquisition was by far the largest: $323 million, with $305 million allocated to goodwill. So that deal alone accounts for most of the mystery we described above. But still, no names for what Cisco actually acquired.

We then proceeded to Cisco’s earnings release for the quarter — and there, finally, we got some answers. The company had this to say:

In the first quarter of fiscal 2022, we closed the acquisition of Epsagon Ltd., a privately held modern observability company with expertise in distributed tracing solutions for modern applications and technologies, including containers and serverless environments.

We’re not tech people, so we have no idea what Epsagon actually does or how important it is to Cisco; but at least we found an answer.

Likewise, we then searched Cisco’s earnings releases for the second and third quarters, and unmasked the mystery acquisitions there, too. In Q2, Cisco acquired a German company named Replex. In Q3, it acquired a company called Opsani. All three companies were privately held.

Analysts could keep digging from there if you wanted. For example, Cisco’s total acquisitions rose from $351 million in the second quarter to $364 million in the third. That’s a difference of $13 million, and according to the earnings releases, that must have been the Opsani deal.

Well, Opsani has only 11 employees on LinkedIn, according to its company page. Perhaps the company has more employees who aren’t on LinkedIn, but clearly this suggests that Cisco paid $13 million for a very small business. But goodwill rose only $5 million in that quarter, so what else did Cisco get for the $13 million?

We here at Calcbench don’t know, and we’ll end our post now. Our point is merely that goodwill can often be a murky part of corporate dealmaking — but with the right data and a bit of determination, you can brighten the picture considerably.

Don’t forget, we have a free webinar about goodwill assets happening on Monday, Sept. 26, at 1 pm ET. If you want to learn more, register today!