Today we continue our look at supply chain disruptions (one might say we have a steady supply of posts on the subject…) by examining the disclosures of trucking company J.B. Hunt Transport Services ($JBHT). After all, shouldn’t a company in the business of moving stuff around be making a killing these days?

At first glance of the income statement, that hypothesis would seem correct. Revenue in third-quarter 2021 was up 27.2 percent from the year-ago period, including “fuel surcharge revenues” that soared from $176.5 million last year to $330.9 million today.

Figure 1, below, shows that 10-Q comparison. Yes, operating expenses rose by 25 percent — but operating income, pre-tax earnings, and net income rose by even larger numbers. So in that world, do higher prices really matter that much? 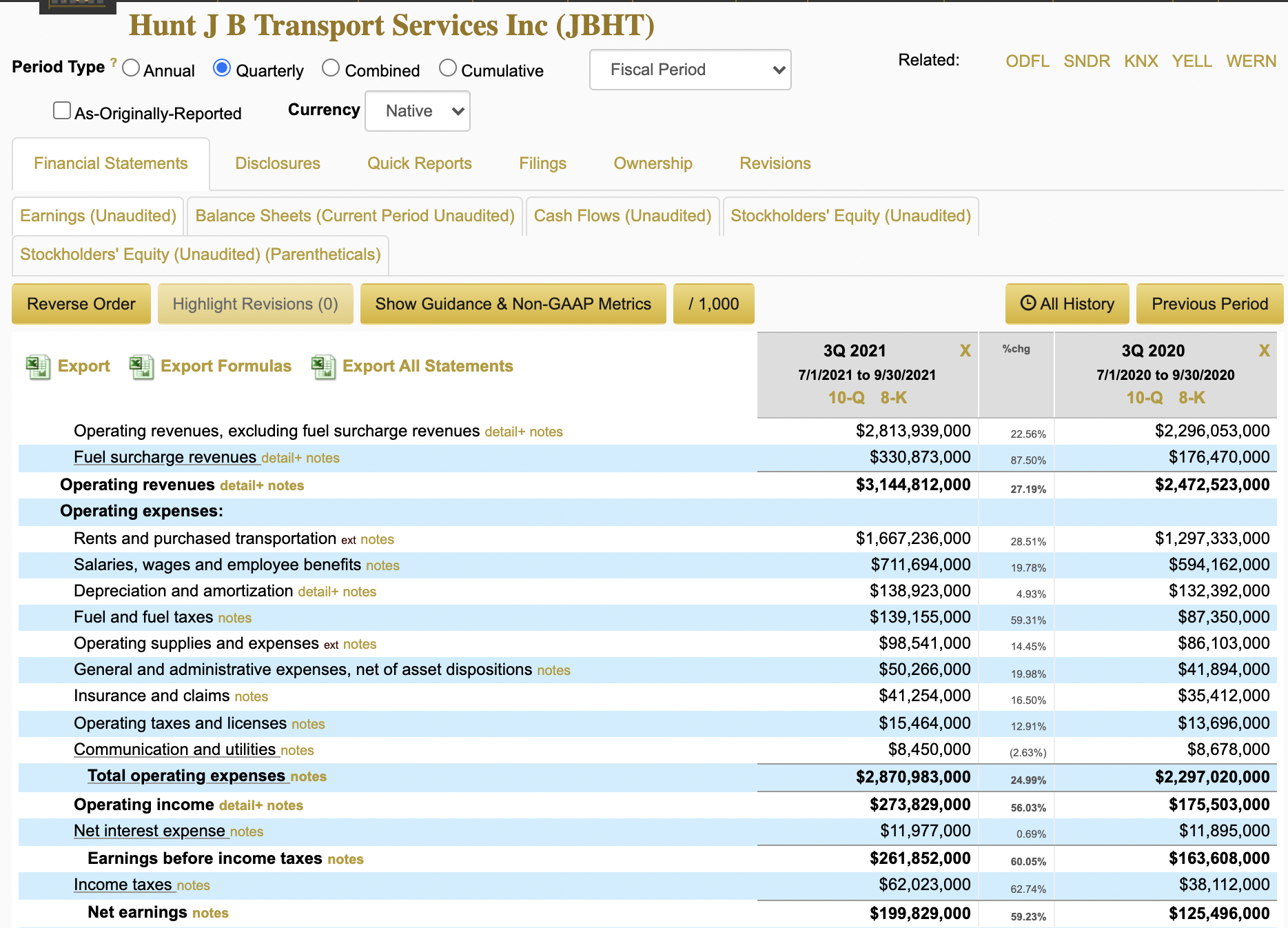 Upon closer inspection of Hunt’s disclosures, maybe they do. We also peeked at the company’s balance sheet, and found that net accounts receivables have risen 28.6 percent over the last 12 months; from $1.121 billion in Q3 2020, to $1.442 billion today. See Figure 2, below. 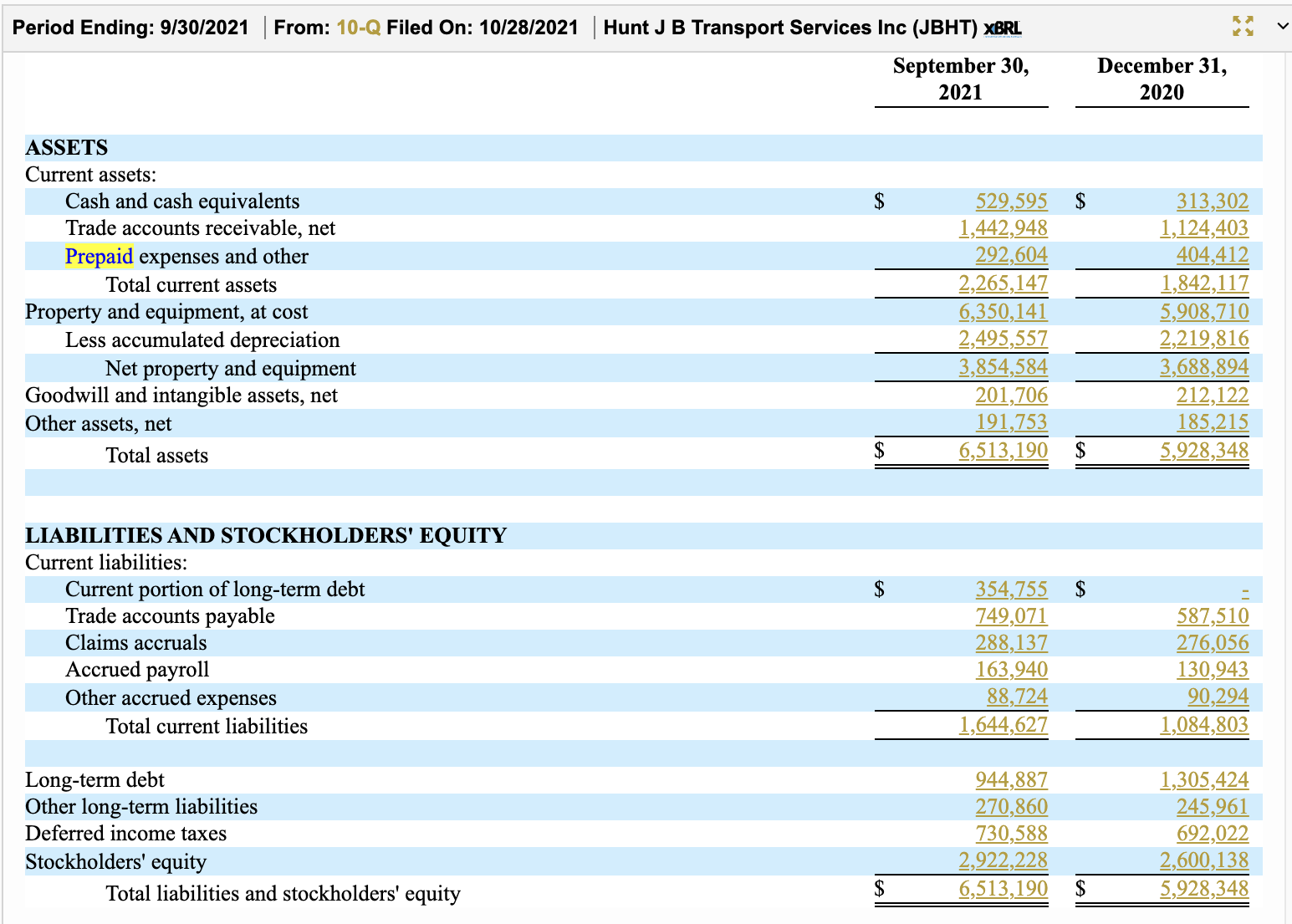 A growing accounts receivable line can indicate that customers are taking longer to pay their bills, or that some customers aren’t likely to pay them at all. So we used our handy Trace feature to see what Hunt disclosed in the footnotes about its growing A/R line:

The adequacy of our allowance is reviewed quarterly. Balances are charged against the allowance when it is determined the receivable will not be recovered. The allowance for uncollectible accounts for our trade accounts receivable was $17.0 million at September 30, 2021 and $18.4 million at December 31, 2020. During the three and nine months ended September 30, 2021, the allowance for uncollectible accounts increased by $1.1 million and $2.5 million, respectively, and was reduced $0.3 million and $3.9 million, respectively, by write-offs.

Also keep an eye on prepaid expenses, which have been falling quarter after quarter for all of 2021 so far. Companies sometimes cut back on prepaid expenses to conserve cash. We don’t know whether that’s the case here, but the question is worth asking next time you’re on a J.B. Hunt earnings call.

You can also glean more insight about Hunt’s operations from its earnings statement, which contains quite a bit of other, non-GAAP information. We pulled up the earnings statement on our Interactive Disclosure page, and scrolled down to the list of “Operating Statistics by Segment.” There, Hunt shared numerous details about the size of its trucking fleet, number of hauls, and revenue per haul. Take a look: 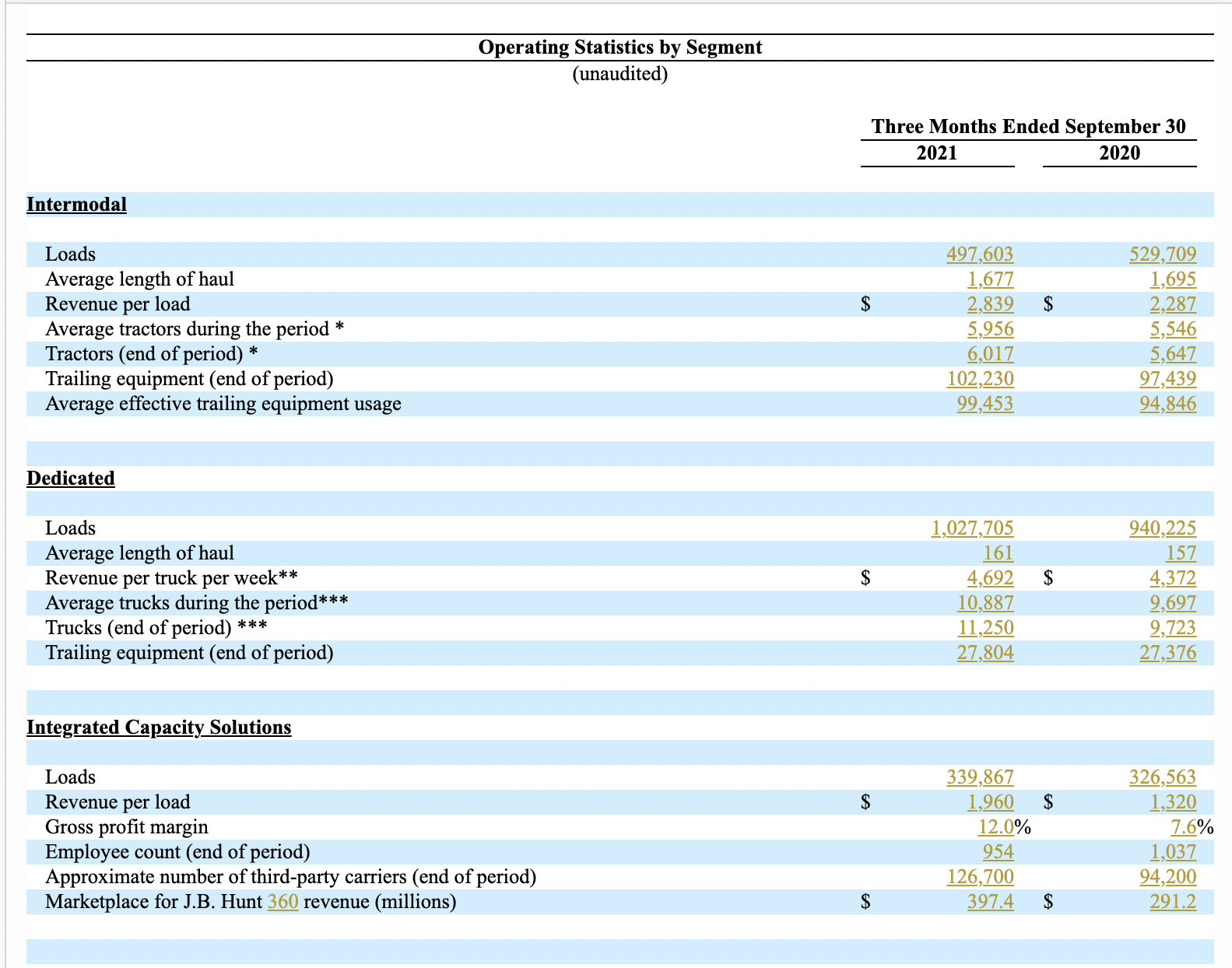 We can see that the number of “intermodal” loads is down 6 percent, but revenue per load is up a whopping 24 percent. Why? If you read the narrative disclosures, you get even more detail:

Overall intermodal volumes declined 6% versus the same period in 2020. Eastern network loads declined 2%, while transcontinental loads declined 9% compared to the third quarter 2020. Demand for intermodal capacity remains strong, however, volumes in the quarter were negatively impacted by a continuation of rail restrictions across the network and elevated detention of trailing equipment at customer facilities. We believe labor shortages across the industry in both rail and truck networks and at customer warehouses are at the core of the supply-chain fluidity challenges limiting our asset utilization and capacity.

In other words, labor shortages and infrastructure glitches are gumming up Hunt’s ability to move stuff around, but the company is making up that difference through higher rates to customers and fuel surcharges.

So even at a business that should be doing great in this time of supply chain stress, there’s plenty to ask about and consider. Thankfully the one raw material that is in abundant supply right now is data.