We keep rolling today with our in-depth examination of SPACs and their related disclosure issues, with a look at one issue that’s made a lot of news lately: the wave of restatements that roiled SPACs earlier this year.

The broad strokes of the story are as follows. Back in April, the Securities and Exchange Commission published guidance warning SPACs (special purpose acquisition companies) that they may have been recording certain line-items incorrectly.

Specifically, the SEC said, many SPACS had been recording the warrants and FPAs they often issue to investors as equity, when the proper accounting treatment is to record those instruments as liabilities.

This is a rather complicated and arcane branch of accounting, so people shouldn’t assume that SPACs were doing this with nefarious intent. Still, the numbers involved are also large enough that for a firm to correct the reporting, it has to restate prior financials — which SPACs have been doing, in large numbers, for the last three months.

That wave of restatements also led to a big drop in the appetite among investors for investing in SPACs. According to an article in the Wall Street Journal recounting this whole predicament, the money raised by SPACs coming to market plummeted from $35 billion in March to only $3 billion in April, and monthly totals didn’t crack $4 billion May or June either.

So what can Calcbench tell you about a SPAC’s restatements? Lots.

Let’s go back to Pershing Square Tontine Holdings ($PSTH), the $4 billion SPAC led by billionaire investor Bill Ackman, which we first examined in Part II of our SPAC-tacular series. How would an analyst quickly find the particulars of Pershing’s restatement?

First, call up the SPAC in question using our Company-in-Detail page. You’ll see the company’s most recent financial statements, along with a series of tabs running above that display. Click on the option that says “Revisions.”

That will take you to a table that lists the SPAC’s recent filings. Any filings that have been revised will include a small + icon next to the relevant period. See Figure 1, below. The important parts are noted in blue.

Right away we can see that on May 24 Pershing restated its 10-K filing from earlier this year, and that the restatement included 14 adjustments.

Exactly what were those adjustments? Click on the + icon to the left there. That will expand the page to show each revision made by amount, line item, and date. See Figure 2, below. 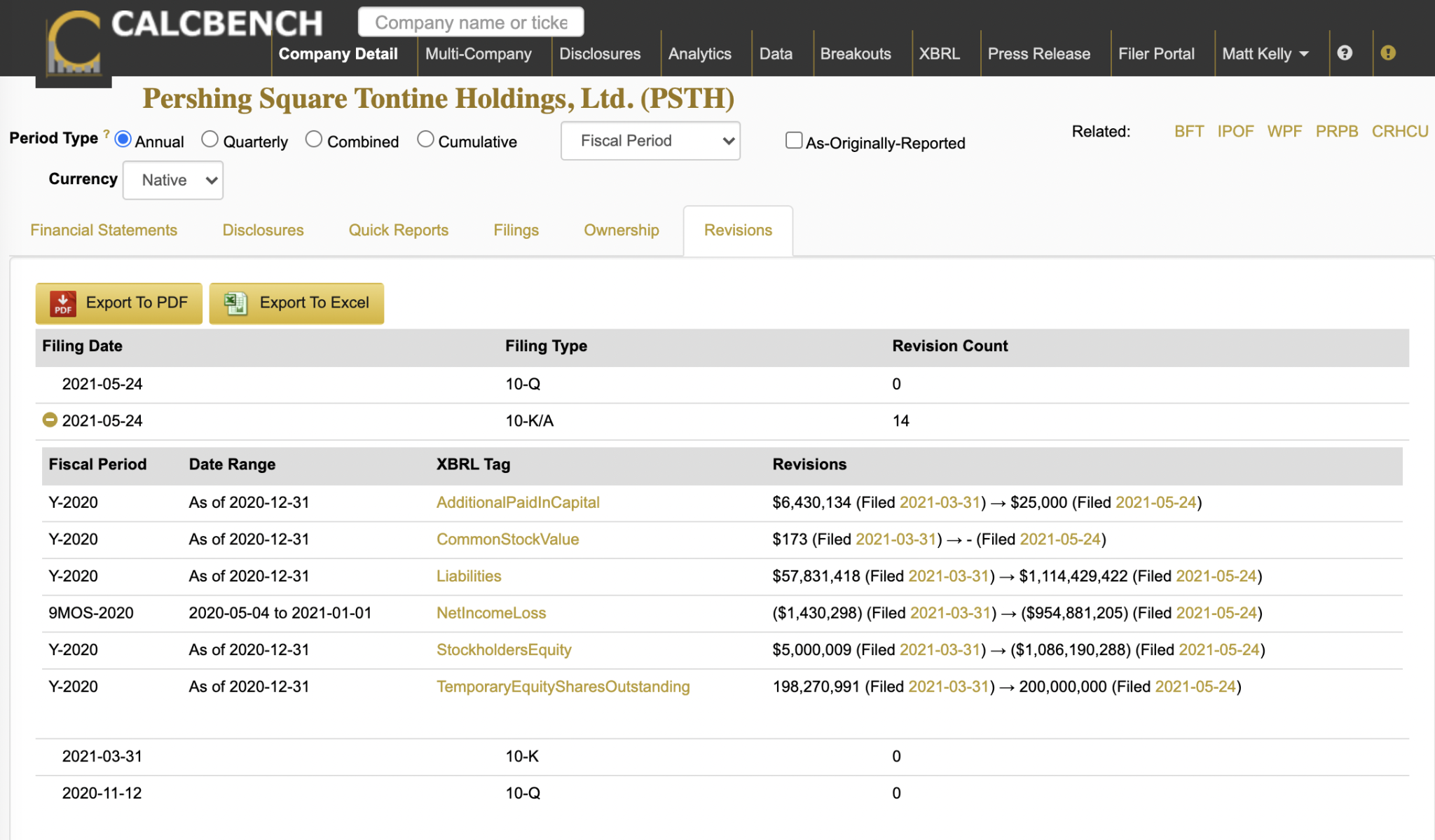 Now we’re getting to the good stuff. For example, we can see that liabilities ballooned from $57.8 million in the original 10-K filing, to $1.114 billion in the restated version. That makes sense; the SEC’s notice had told firms to report all those warrants as liabilities, after all. (Note that in the Revisions column you can see the exact date of the original filing and the subsequent restatement, too.)

The restatement also increased Pershing’s net loss from $1.4 million to $954.8 million; and cut shareholder equity, too. Again, one would expect those changes given the nature of the accounting issue that Pershing had to restate.

Some SPACs have had more extensive restatements than others. Apollo Strategic Growth Capital ($APSG), which reported $818 million in total assets for Q1 2021, made a boatload of revisions across numerous periods this year— including 39 revisions made to its 10-K. See Figure 3, below: 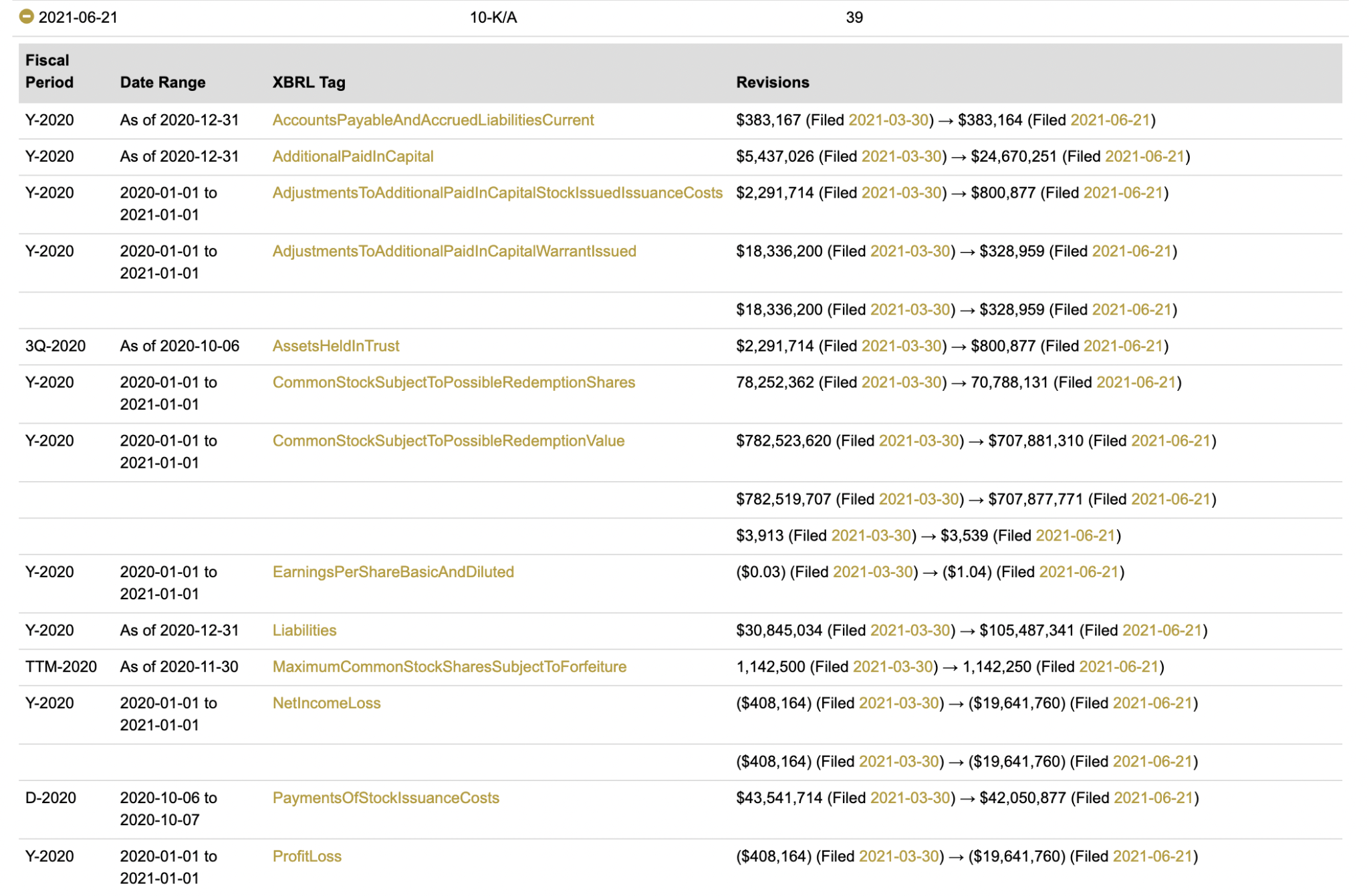 Calcbench can’t speculate on what this restatement wave means for SPACs over the long term. Perhaps it’s only a temporary pause while everyone adjusts to the new numbers on the balance sheet; maybe other pressures that have nothing to do with warrants and GAAP accounting rules will quell SPAC mania anyway.

Our point is only that if you need to see exactly what a SPAC has been doing, or revising, we have all the data you need in just a few keystrokes.