Today we continue our series on SPACs (special purpose acquisition companies) by examining what these firms actually report on the balance sheet and the income statement.

Our first post in this series examined SPACs at the global level: how many such firms actually exist (at least 350 in first-quarter 2021) and the total assets all these firms have (roughly $109 billion, a ten-fold increase from early 2020). We found eight firms reporting more than $1 billion in assets, and only one of them had more than $2 billion: Pershing Square Tontine Holdings (PSTH), managed by billionaire investor Bill Ackman.

So let’s start there. What does a SPAC like Pershing report?

On the income statement Pershing doesn’t report too much, because so far the SPAC isn’t doing much. The company had $4.78 million in legal fees and another half-million or so in expenses in Q1, and a piddling $638 in interest income. That means an operating loss of $5.3 million for the quarter. See Figure 1, below. 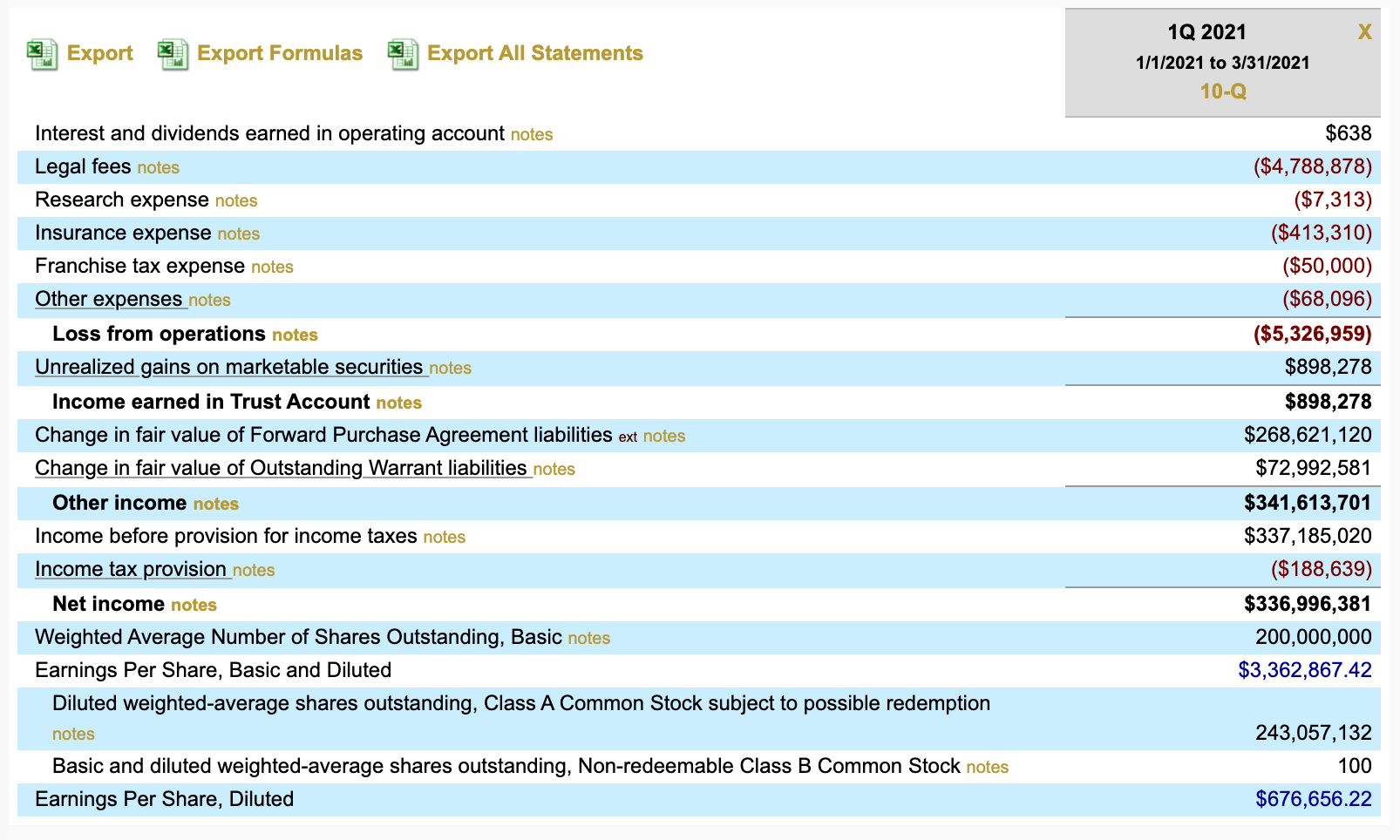 But wait, you say! What are those two line-items for change of fair value in liabilities? Together they add up to $341.6 million in other income, which drove an impressive $337 million in net income for the quarter.

The warrants and forward purchasing agreements are other financial instruments that Pershing (or any other SPAC) offers to investors alongside its IPO shares. They are recorded as liabilities on the balance sheet. The SPAC must then assess the fair value of those liabilities every quarter.

In Pershing’s case, the fair value of those warrant and FPA liabilities declined, which is then recorded as Other Income on the income statement. See Figure 2, below.

You might also be wondering, “Is this warrants and liabilities stuff the same issue the SEC flagged about SPACs in April, and caused a wave of restatements?”

Yes, it is. The SEC warned SPACs that they had been recording warrants and FPAs as equity, when the proper accounting treatment was to record them as liabilities. After that warning many SPACs, Pershing included, had to restate their prior financials. We’ll take a deep dive into that issue in a subsequent post. Figure 2, above, shows how warrants and FPAs are supposed to be reported. (Pershing had fixed the matter for its Q1 report.)

As a practical matter, however, Pershing’s Q1 net income is almost entirely notional. The SPAC did not actually rake in hundreds of millions in revenue. The operating part of its income statement is pretty much a snoozefest.

And the Balance Sheet

The balance sheet isn’t much more exciting. It reveals that Pershing has several classes of assets such as cash, prepaid expenses, and dividends — but the amounts haven’t fluctuated all that much over the last few filing periods.

The big item on the balance sheet is the “cash and securities held in trust account.” That’s where a SPAC parks the capital it raises from investors, before spending that cash on an acquisition target. As you can see in Figure 3, below, Pershing has $4 billion at its disposal. 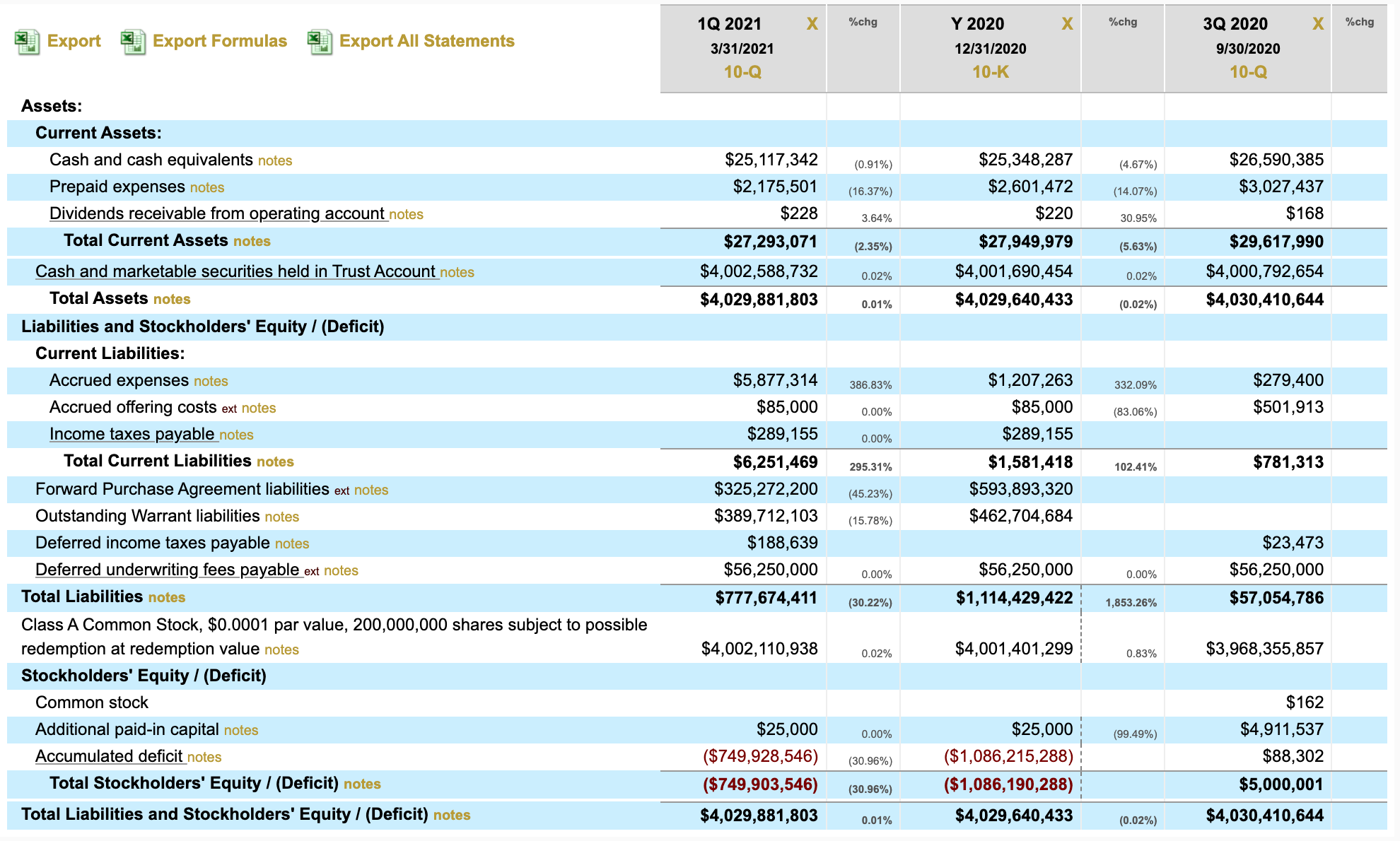 In fact, the only significant change on the balance sheet has been those FPAs and warrants, and the change in fair value Pershing recorded in Q4 2020 and Q1 2021. Most other items hold fairly steady.

As always, you can dive into this data deeply with Calcbench. For example…