Measuring the Gap in Non-GAAP Income

Earnings releases for full-year 2020 results are starting to arrive, which means lots of firms reporting adjusted earnings numbers again. So before everyone gets swept up in non-GAAP financial disclosures this year, we decided to rehearse our data analytics dance moves with a quick study of non-GAAP numbers from last year.

Our analysis was straightforward: compare the GAAP-approved net income of the S&P 500 for 2019 against the adjusted, non-GAAP net income those firms also reported last year. We wanted to know…

Using our Multi-Company research page, pulling the data was easy enough. The standardized metrics we track include both net income and non-GAAP income, so you can find both numbers for the S&P 500 immediately. See Figure 1, below (where net income is already displayed, and we’re about to pull non-GAAP net income). 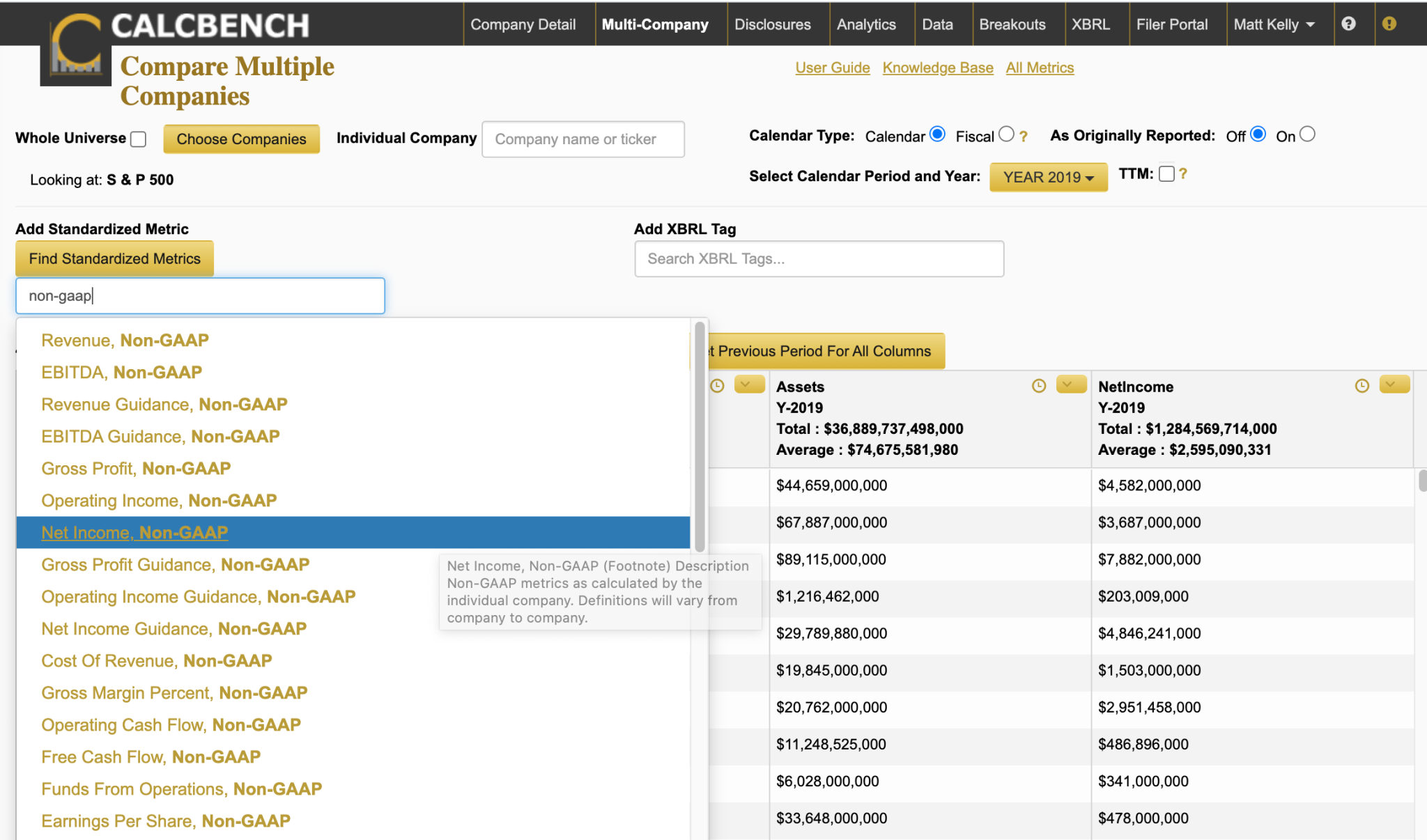 Analyzing those numbers is a bit more tricky than pulling them. We can’t simply total up GAAP and non-GAAP income because while all firms do report GAAP income, many firms (240 of the S&P 500) don’t report non-GAAP income. To measure the difference between the two accurately, you should only count firms that report both types of numbers.

When we perform that more focused analysis, the answers we get are these:

Who had the biggest differences? Figure 2, below, shows the 10 firms with the largest non-GAAP numbers above GAAP net income. 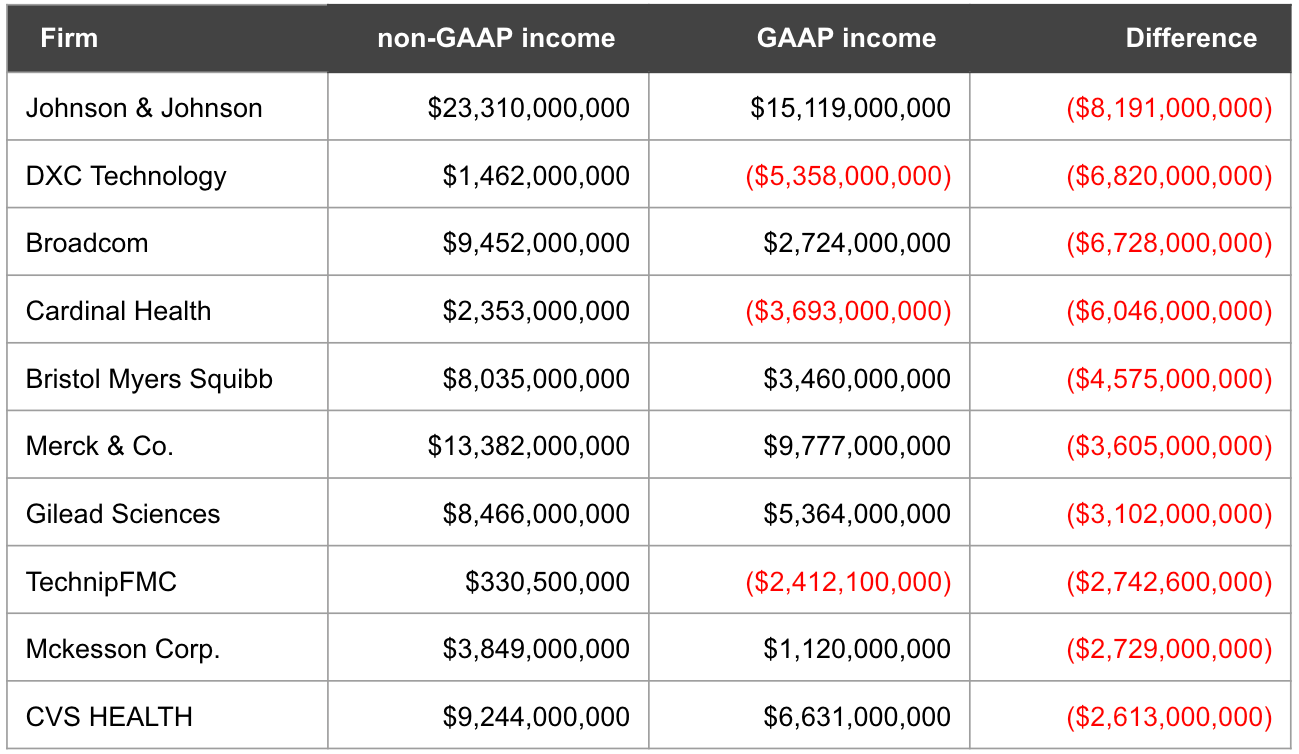 Among those firms, the largest drivers of adjustment were goodwill impairment, amortization of intangibles, and litigation costs. (Although the exact reasons for each difference varied from firm to firm, so as always, read the tables and the footnotes.)

We were also curious about those 64 firms who reported non-GAAP net income lower than regular GAAP income. Why?

The 10 firms with the biggest spreads with non-GAAP income below GAAP are in Figure 3, below. 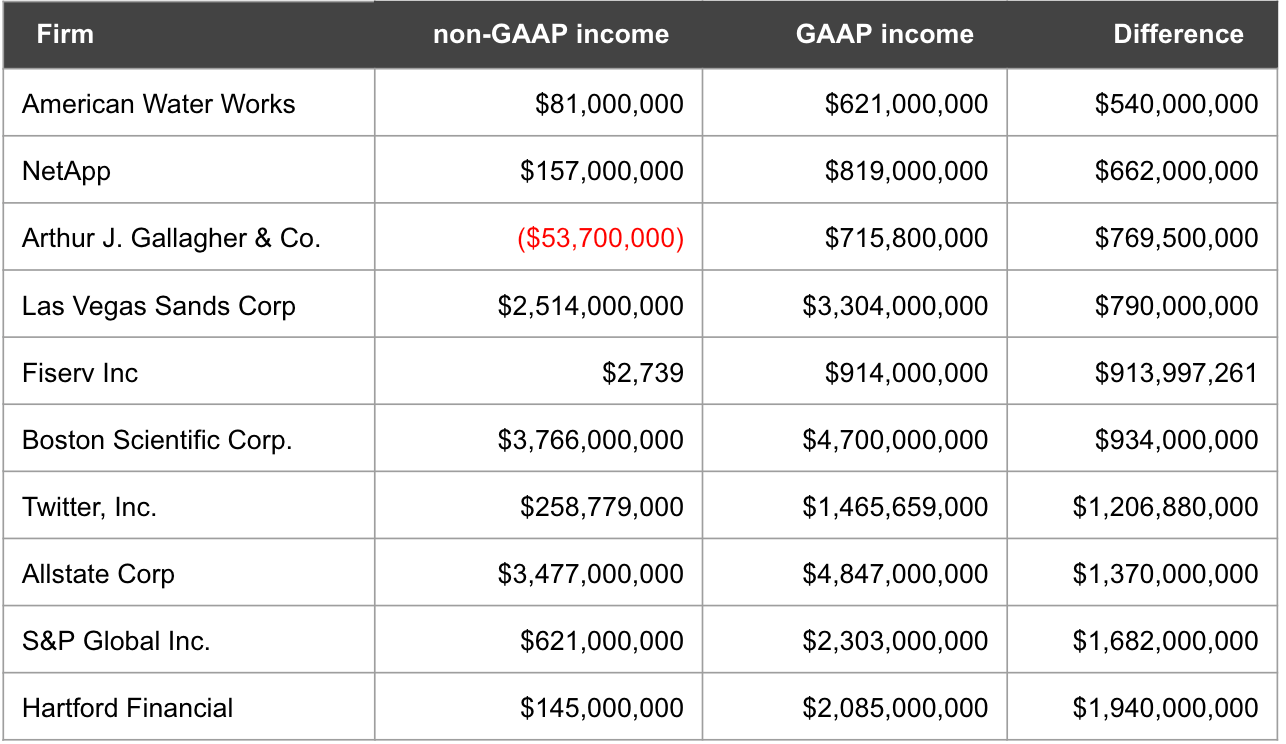 Again, exactly why a firm would report non-GAAP income that’s lower than GAAP income varied widely. Eli Lilly & Co. ($LLY), for example, had a one-time gain of $3.68 billion in 2019, stemming from discontinued operations: it had cashed out of an animal health business it had spun off. That led to non-GAAP net income of $5.56 billion and GAAP income of $8.32 billion. We had a whole post on Lilly and others with earnings boosts due to discontinued operations earlier this month.

So there are all sorts of ways that firms can report some very large differences between GAAP and non-GAAP income, both positive and negative. Food for thought as those 2020 earnings releases start rolling in.