Now that the largest U.S. banks have all filed their Q4 2022 reports, we decided to revisit one of our favorite issues for this sector: the changing revenue streams from interest and non-interest lines of business. 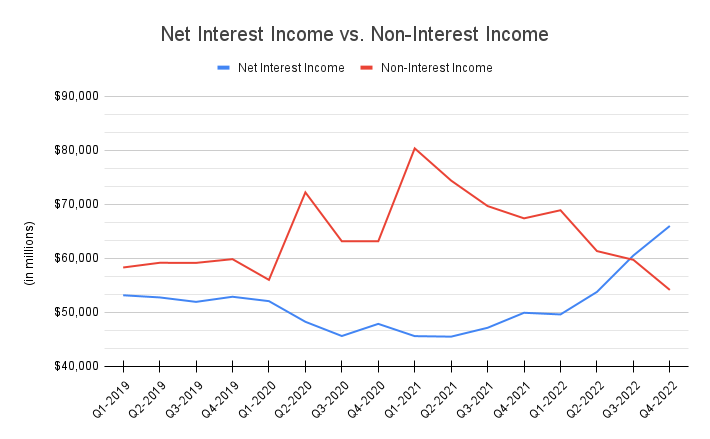 Note the two spikes in non-interest income at the start of 2020 and again at the start of 2021 Those spikes coincide with (1) the Federal Reserve first cutting interest rates essentially to zero at the start of the covid-19 pandemic, prompting a wave of corporate loans; and (2) the refinancing boom in home mortgages in 2021.

Then we wanted to get more granular. Figure 2, below, shows the change in non-interest income among those same six banks over the same four years. 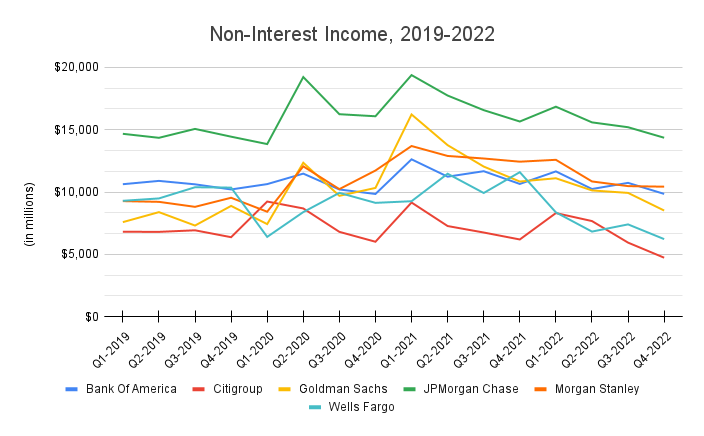 First, note that only three banks now have non-interest income substantially lower than pre-pandemic levels: Bank of America, Morgan Stanley, and Wells Fargo. The other three saw considerable drops from their high-water marks in 2021, but Q4 non-interest income was still in the ballpark of where it was in 2019.

Second, the bank with the widest swings in non-interest income was Goldman Sachs — somewhat surprising, since these are the folks who supposedly know everything. Then again, considering how Goldman just admitted that its foray into consumer banking was a bust, maybe they’re not omniscient after all.

We’ll revisit the banking sector again in a few weeks, once the smaller banks complete their Q4 reports and we have a fuller picture of who’s earning how much from which lines of revenue. Plus, analysts do have one big question to ponder for 2023.

What happens to net interest income and non-interest income when the Fed pauses interest rate hikes? Because that could well happen, and then the shifting lines we see in Figure 1 might change quite a bit.