In the summer of 2020 Calcbench had a post on this blog about wild swings in the price of eggs, and how that volatility affected Cal-Maine Foods ($CALM), the largest producer and distributor of eggs in the United States.

Well, as you may have seen at the supermarket lately, egg prices remain stubbornly high despite signs that inflation is receding in many sectors. That’s partly due to persistent supply chain problems in the egg industry, and partly due to an avian flu virus that emerged in 2022 and devastated the poultry population.

So we decided to revisit Cal-Maine. What do its disclosures say these days about the ceaseless rise of egg prices?

One can start with gross profit, which is revenue minus the cost of revenue. Figure 1, below, charts the astonishing rise in Cal-Maine’s gross profit from the start of the pandemic through the end of 2022. 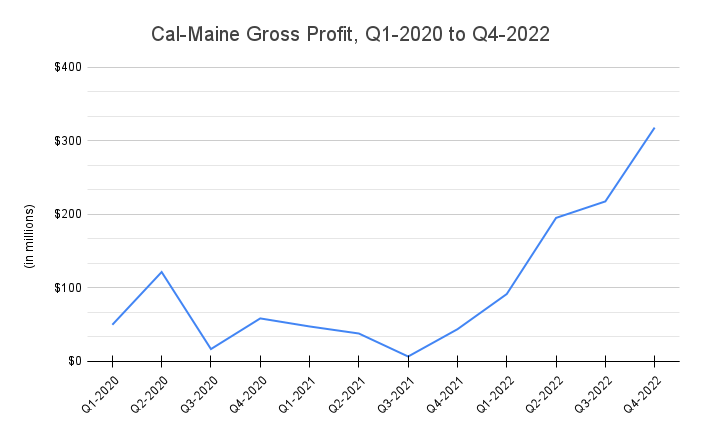 The story here is simple. Egg prices have soared, so Cal-Maine’s revenue has soared. Its cost of revenue, however, has increased at a much more moderate pace — so the company is generating huge piles of cash to manage its operations. Consider its most recent quarterly report. Revenue grew by 110 percent from the year-earlier period, while cost of revenue only rose 43 percent; that translated into a jump in gross profit of more than 620 percent.

The rest of Cal-Maine’s operations grew at a moderate pace too. So by the time we reach the bottom of the income statement (see Figure 2, below), we arrive at net income growth of 16,830 percent. No, that’s not a typo. 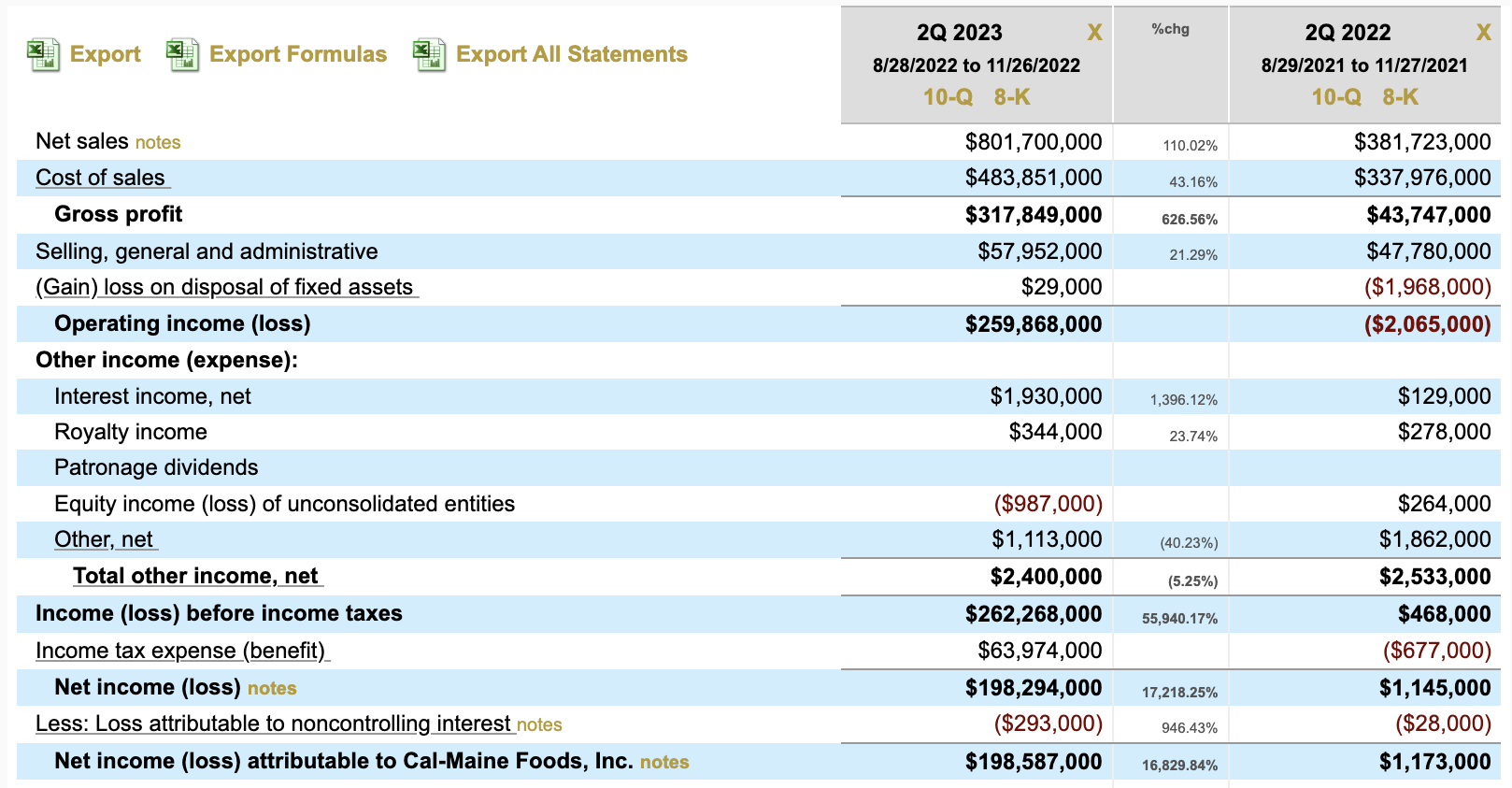 Now let’s widen the lens a bit and look at what else Cal-Maine is disclosing about its egg operations, to get a better sense of potential future growth or pitfalls.

Yep, we used that pun. We do not apologize.

Because Cal-Maine’s latest disclosures come from a 10-Q rather than a full-year 10-K (next one arrives in summer), we have less data than we’d like. But one can still find startling details from the earnings release that Cal-Maine also filed with its most recent quarterly report. See Figure 3, below.

Net average selling price for a dozen eggs essentially doubled, from $1.36 one year ago to $2.71 this quarter — and that blends together both conventional and “specialty” eggs, which we didn’t even know were a thing until just now. Conventional eggs alone had their price take flight from $1.15 to $2.88 per dozen, an increase of 250 percent. That increase is what’s leaving you staring at prices on the supermarket shelf.

We should note, however, that unit sales of eggs didn’t rise all that much: only 5.4 percent, from 269.5 million one year ago to 284.1 million today. That begs a question someone might want to put to Cal-Maine on the next earnings call: given the fierce demand, how much will Cal-Maine invest in future production capacity?

You can kinda sorta get an answer to that from Cal-Maine’s inventory disclosures, since “inventory” is just another word for “chickens” here. Apparently the company has “layers,” which are mature chickens that lay eggs; “pullets,” which are immature chickens too young for the task; and “breeders,” which are roosters and fertile hens used to make the next generation of layers.

As of the latest quarter, Cal-Maine had 10.4 million pullets and breeders, down from 11.5 million last May; and 43.7 million layers, a modest increase from 42.2 million last May. So will that be enough to overcome the avian flu virus still threatening flocks? Are the breeders breeding fast enough? Would Cal-Maine ever want to purchase more chickens to meet rising prices and strong demand?

We don’t know. But we do have the data to help analysts who follow the poultry industry let their analysis take flight.