The lord giveth, and the lord taketh away — and lately, with rising interest rates, companies in the mortgage business have been reminded of just how true that statement is.

One piece of evidence was in the Management Discussion & Analysis. There, Zillow walked through the decline in mortgage origination volume (that is, the total dollar value of mortgages that Zillow issues to consumers, and then typically resells to banks or other mortgage industry players). See Figure 1, below.

As you can see, total loan volume in Q3 was down 76 perent from the year-earlier period, from $1.11 billion to $271 million. Refinancings plunged 96 percent, to a piddling $31 million. (Although honestly we’re more puzzled at the people who did refinance in Q3, with mortgage rates at their highest levels since the 1990s. Did they not see the memo to refinance last year?)

Anyway, mortgage origination volume matters because as that number falls, so does the revenue Zillow generates from its Mortgages operating segment. That brings us to Figure 2, below, which shows Zillow’s segment revenue for the quarter.

Mortgage orgination revenue dropped 63 percent for the quarter, from $70 million one year ago to $26 million today. That segment also dropped from 13 percent of all revenue one year ago to 5 percent this quarter. (The bulk of Zillow’s revenue still comes from its “IMT” segment, derived from online advertising and other internet-based real estate services.)

For comparison purposes, Zillow had $517 million in loan orgination volume for Q3 2020, including $353.3 million in refinancings — so the company saw a gigantic spike when interest rates were at rock-bottom lows during the pandemic, and now those numbers have fallen off a cliff. Figure 3, below, tells the tale. 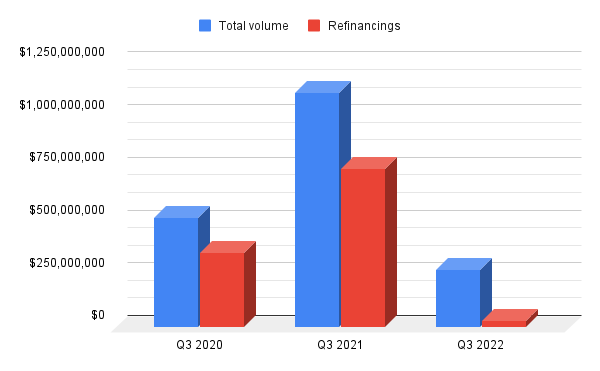 Notable: Zillow didn’t even bother reporting loan origination volumes in 2019, before the pandemic pushed interest rates to zero and the home sales market took off like a rocket. Now it’s crashing just as hard.