A Look at Amazon’s Segment Revenues

Amazon.com ($AMZN) filed its third-quarter report last week, and gave markets a jolt with mixed results for Q3 (earnings beat expectations; revenues missed) and a warning that the fourth quarter might be difficult.

Calcbench has taken a more nuanced view of Amazon over the years. Historically the company has generated oodles of profit as a provider of cloud-based services in its Amazon Web Services segment, with so-so performance from its much larger e-commerce segment.

So how’s that been going lately?

Figure 1, below, gives us one sense of the company’s two revenue streams. 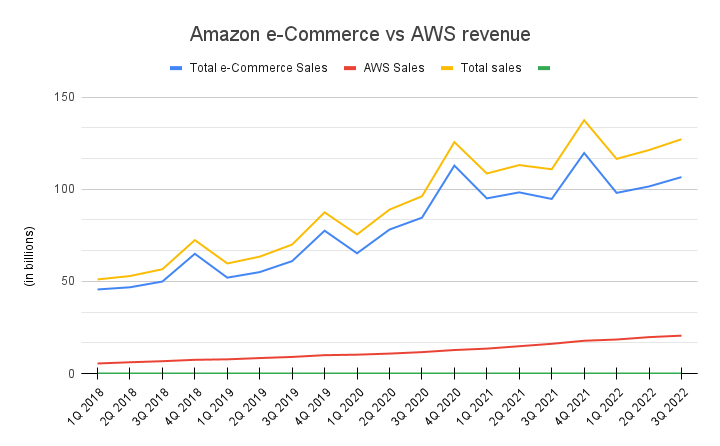 Notice how the blue line (e-commerce revenue) follows the general direction of the yellow line (total revenue) — but is slowly parting ways with the yellow line. Why? Because the red line (AWS revenue) is, inexorably, becoming an ever-larger part of Amazon’s total revenue. For example, AWS revenue was only $6.68 billion in Q3 2018; this quarter, it was $20.54 billion.

Figure 2 shows that same dynamic another way: AWS revenue as a percentage of total Amazon revenue over time. 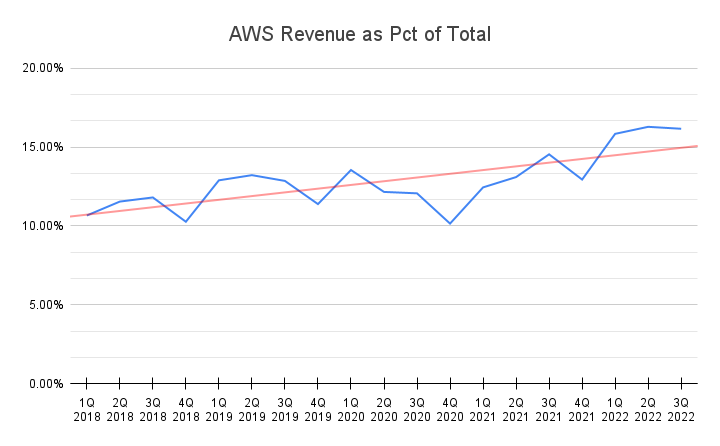 From quarter to quarter, sometimes that percentage fluctuates. The trend line in red, however, is sloping upward nicely. AWS revenue went from 10.66 percent of total revenue at the start of 2018 to more than 16 percent for the last two quarters, the highest it’s ever been.

All that said, the real question is whether AWS’s operating income is large enough, and consistent enough, to offset the hit-or-miss margins that Amazon’s e-commerce segment has been turning in for years. The answer might well be no.

For example, Figure 3 below shows Amazon’s sales, expenses, and operating income for each of its major segments. (Amazon breaks out its e-commerce sales into North America and International; for figures 1 and 2, above, we just added those together into one e-commerce segment.)

As to the e-commerce segment, what more needs to be said about it? That segment has reported negative margins many times over the years, and is much more susceptible to volatility in consumer sentiment, inflation, fuel costs, and supply chain disruptions. None of that is news.

AWS perhaps not acting as a buffer for that volatility — that is news nobody would want to see. Nevertheless, it might be a delivery on investors’ doorstep in quarters to come.

Analysts need to dig into the data to find the right answer. Thankfully, Calcbench has that in spades.