Wall Street banks began to file their second-quarter earnings releases this week, giving us our first glimpse into how rising interest rates might be affecting their business.

One particular segment of business — mortgage banking — is not pretty.

Figure 1, below, shows the trend in mortgage banking revenue over the last six quarters for Wells Fargo ($WFC) and JPMorgan Chase ($JPM), which both filed their Q2 numbers this week. 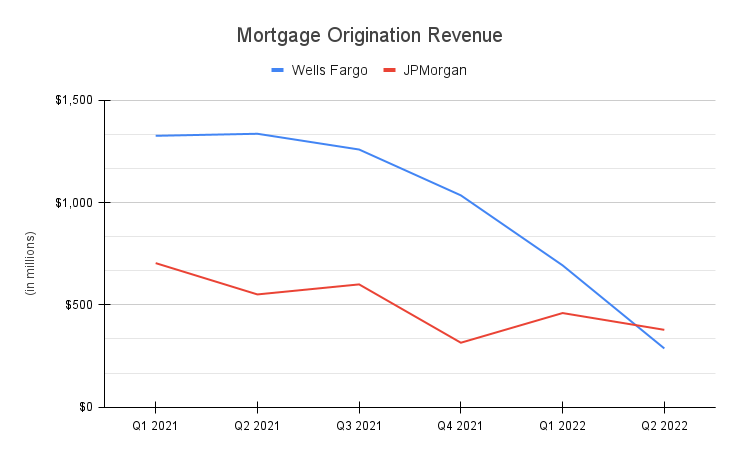 Neither trend looks good, and Wells Fargo looks especially awful. Its mortgage banking business went from $1.34 billion one year ago to a measly $287 million this quarter — and no, that’s not an error. We checked. Mortgage banking revenue plummeted 78.5 percent. That's a worse performance than, like, the Chicago Cubs. At least JPMorgan saw a year-over-year decline of only 31.4 percent, from $551 million to $378 million.

Other banks did not do any better. US Bancorp ($USB), for example, saw mortgage banking revenue fall 59 percent, from $346 million one year ago to $142 million this quarter.

So far only Citigroup ($C) has held its own this quarter, with $4.1 billion in mortgage banking originations. That is flat from the year-earlier period, and even an increase from the last three quarters, when originations dipped below $3.5 billion.

None of this should be a surprise, of course. As the Federal Reserve keeps raising interest rates, mortgage rates rise as well — and then would-be homeowners either get priced out of the market, or get spooked at the higher costs.

As shown in this data from the St. Louis Fed, average rates for 30-year fixed mortgages have gone from below 2.8 percent at the start of 2021 to nearly 6 percent this spring. Nor are those rates likely to decline any time soon, since the Fed plans future rate hikes as soon as this month.

That’s not to say higher interest rates are universally bad for banks. On the contrary, higher rates allow them to charge more for loans, so interest income is likely to increase. Our point is merely that rising interest rates can be challenging for banks; rising rates help some parts of the business but hurt others, and it can take time for a bank to find its equilibrium in that volatile environment.

Financial analysts following banks will want to peer into the depths of disclosures about operating segments, revenue lines, expense lines, and the like if you want to get an accurate sense of bank performance. Thankfully the data is there — you just need Calcbench to pull it out!