That Big Goodwill Impairment You May Have Missed

So there we were the other day, sitting around Calcbench headquarters and talking about goodwill assets, when someone asked, “What was the last really big impairment we’ve seen?”

One of the research assistants did a quick search, and we found it: Teladoc Health ($TDOC), a telehealth medicine company based in upstate New York, which declared a $6.6 billion (yes, with a “b”) impairment just a few weeks ago!

Any impairment north of $1 billion is usually a big deal. We wondered:  what happened there, and what might it tell us about other firms and market conditions these days?

We can begin with the numbers. That $6.6 billion impairment was 45.5 percent of Teladoc’s total goodwill assets, which stood at $14.5 billion at the end of 2021. Moreover, goodwill assets accounted for nearly 82 percent of Teladoc’s total assets at the end of 2021. Meaning, that $6.6 billion impairment reduced total assets on the balance sheet by (ooof) nearly 40 percent. Figure 1, below, shows the comparison from Q4 2021 to Q1 2022. The goodwill line is high-lighted in gray.

OK, that’s gotta hurt — but why, exactly, did Teladoc take such a large impairment?

As always, the answer could be found in the footnotes. Teladoc gave a clear description of the cause and an impressively fulsome description of how it performed its impairment calculations.

First, the cause: sustained decreases in share price. Like so many other firms, Teladoc saw sharp upward appreciation in the early days of the pandemic, rising from $83 per share at the start of 2020 to a high of $292 by early 2021. Then came the downdraft, which pushed Teladoc all the way down to $66 by the end of Q1 2022 when it decided to test for impairment. These days Teladoc is even worse, around $34 per share. See Figure 2, below. 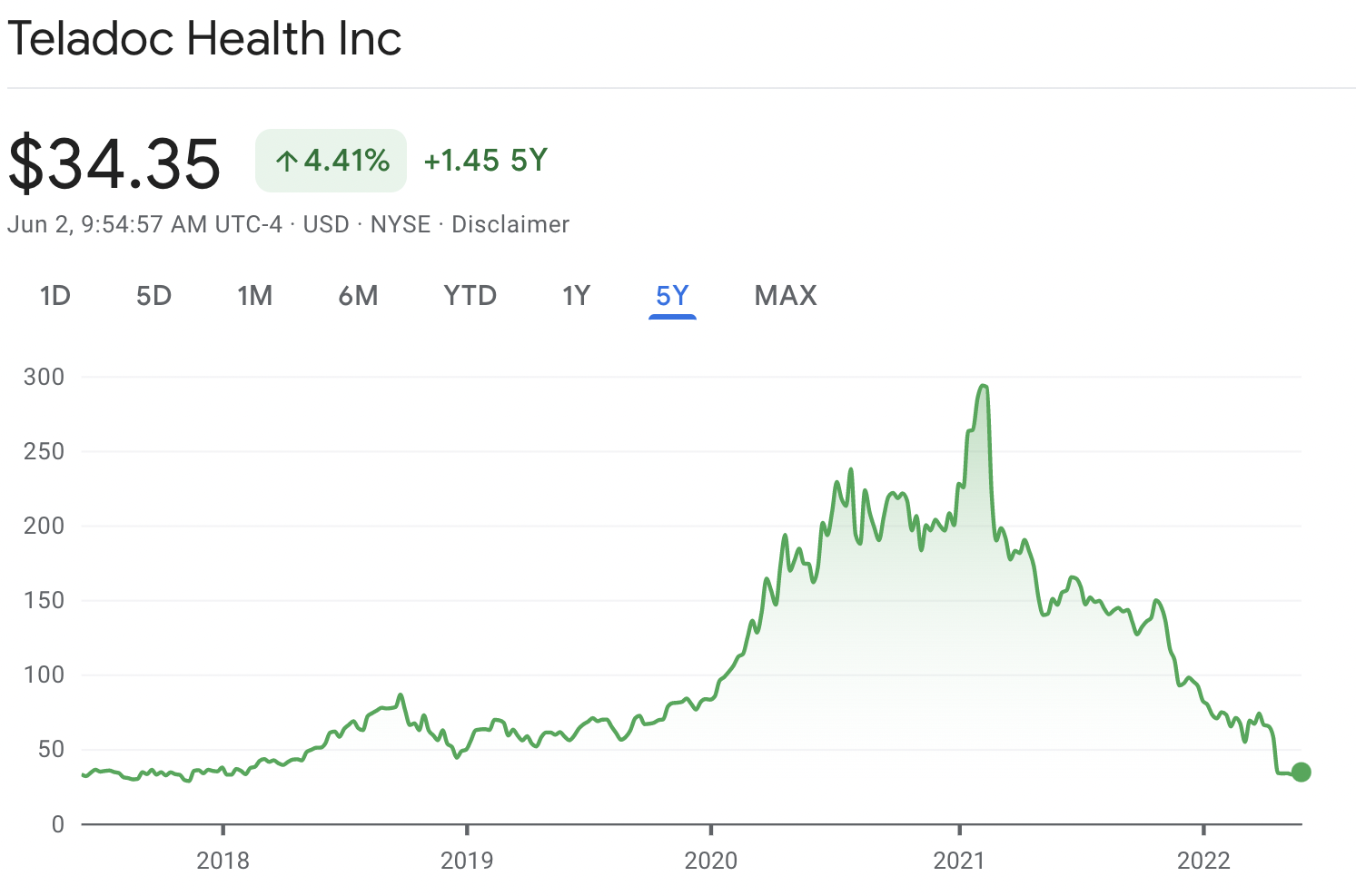 Next, Teladoc described how it performed the reassessment. We’ll just excerpt the disclosure itself:

Consistent with prior goodwill impairment testing, the Company’s March 31, 2022, testing reflected a 75%/25% allocation between the income and market approaches. The company believes the 75% weighting to the income approach continues to be appropriate as it more directly reflects its future growth and profitability expectations. For the company’s March 31, 2022 impairment testing, as compared to its December 1, 2021 testing, the company reduced its estimated future cash flows used in the impairment assessment, including revenues, margin, and capital expenditures to reflect its best estimates at this time. The company also updated certain significant inputs into the valuation models including the discount rate which increased reflecting, in part, higher interest rates and market volatility, and the company reduced its revenue market multiples, reflecting declining valuations across the company’s selected peer group.

Then Teladoc even included a table to show its math:

You don’t see such detailed disclosure of a goodwill impairment too often. We thank Teladoc for its efforts, even if investors might not like the impairment itself too much.

The broader point here is that in today’s bear market, firms with a high proportion of total assets tied up in goodwill could be in for some nasty surprises; a prolonged downward trend in your share price could lead to impairments that ruin your balance sheet.

Indeed, back in 2020 (long before the pandemic and today’s bear market) Calcbench even devised a simple impairment sensitivity test, where you could assess how much an impairment of 1 percent, or 5 percent, or 10 percent would harm earnings per share.

Analysts might want to keep that test handy these days, so you can identify which firms have a lot of value tied up in goodwill, and better anticipate which ones might disclose an impairment that ruins EPS.