Without question, technology stocks have taken a beating in the last several weeks. Trying to discern growth, risk, and opportunity amid the flood of data those companies have reported is no easy task.

Case in point: Apple ($AAPL), one of the giants.

Apple is often praised for the rigor of its financial reporting. The challenge is simply that there’s so much of it, analysts can have a hard time discerning trends or identifying important nuggets.

For example, when Apple filed its first-quarter 2022 report on April 29, it included this breakdown of revenue by product:

To be clear, we love Apple’s voluminous disclosures; it’s one of the reasons we mention the company so often on this blog. From an analyst’s perspective, however, you need more context than what we see above to understand how Apple’s product sales might be evolving over time.

To get a better sense of that context, we used Calcbench’s ability to export historical segment disclosures to Excel. (The same ability we mentioned a few weeks ago while looking at Delta Air Lines and its passenger revenue per available seat mile.) Just hold your cursor over one of the hyperlinked numbers, then hit “Export History” when the feature box opens.

We did that for Apple, and got a nifty spreadsheet with quarterly disclosures for each revenue segment going back to Q1 2018:

From there, you can start charting the performance of individual product lines over time. You could also overlay those performance graphs against similar segments for other firms — say, tablets or phones made by Samsung, or desktop computers made by HP. Or you could just study revenue growth within Apple’s several product lines, to see which ones are growing fastest.

We took the Excel data and quickly cooked up a chart for Mac, iPad, and wearables product lines. (iPhone revenues are so much higher they’d make the chart difficult to read.)

So, 20 minutes after we thought,”Hmmm, how is Apple doing these days,” we already had this chart done: 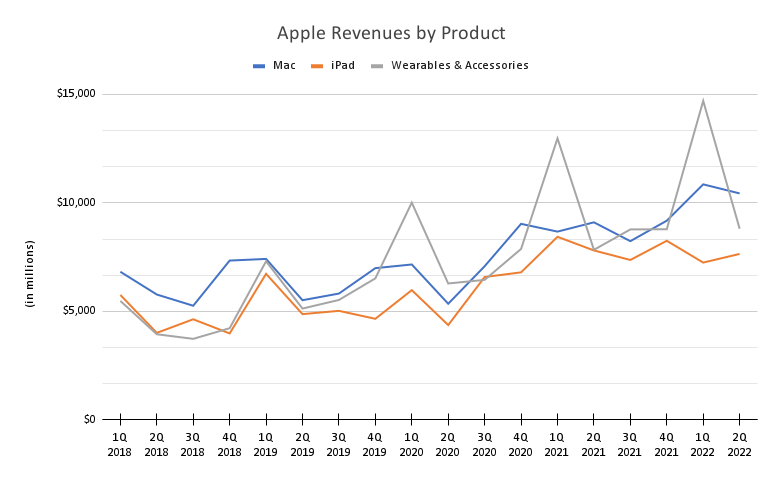 Whatever you’re looking for, Calcbench has the data.