Russia’s invasion of Ukraine will have enormous implications for financial markets. Calcbench can help people unravel those implications in several ways.

Russia’s invasion of Ukraine is first and foremost a moral and humanitarian nightmare. Before anybody even begins to contemplate the financial repercussions of Vladimir Putin’s actions, we first urge people to remember that fact.

That said, the West's response to Putin’s invasion is already having significant ramifications in the financial markets. Businesses and financial analysts will need to anticipate those ramifications, since resilient economic performance here will be crucial to defeat Putin there. So today we have a quick rundown of how analysts can use Calcbench to better understand companies’ exposure to Russian interests and to analyze disclosures about Russia risk.

One place to start is the Segments, Rollforwards, and Breakouts page. This page allows you to search companies’ various segment disclosures — including geographic segments, and the companies that list Russia as one such segment.

You can do this by selecting a group of companies to study and then entering “Russia” in the Segment column. This will return a list of companies that disclose financial data associated with Russia, and what that data is. See Figure 1, below. 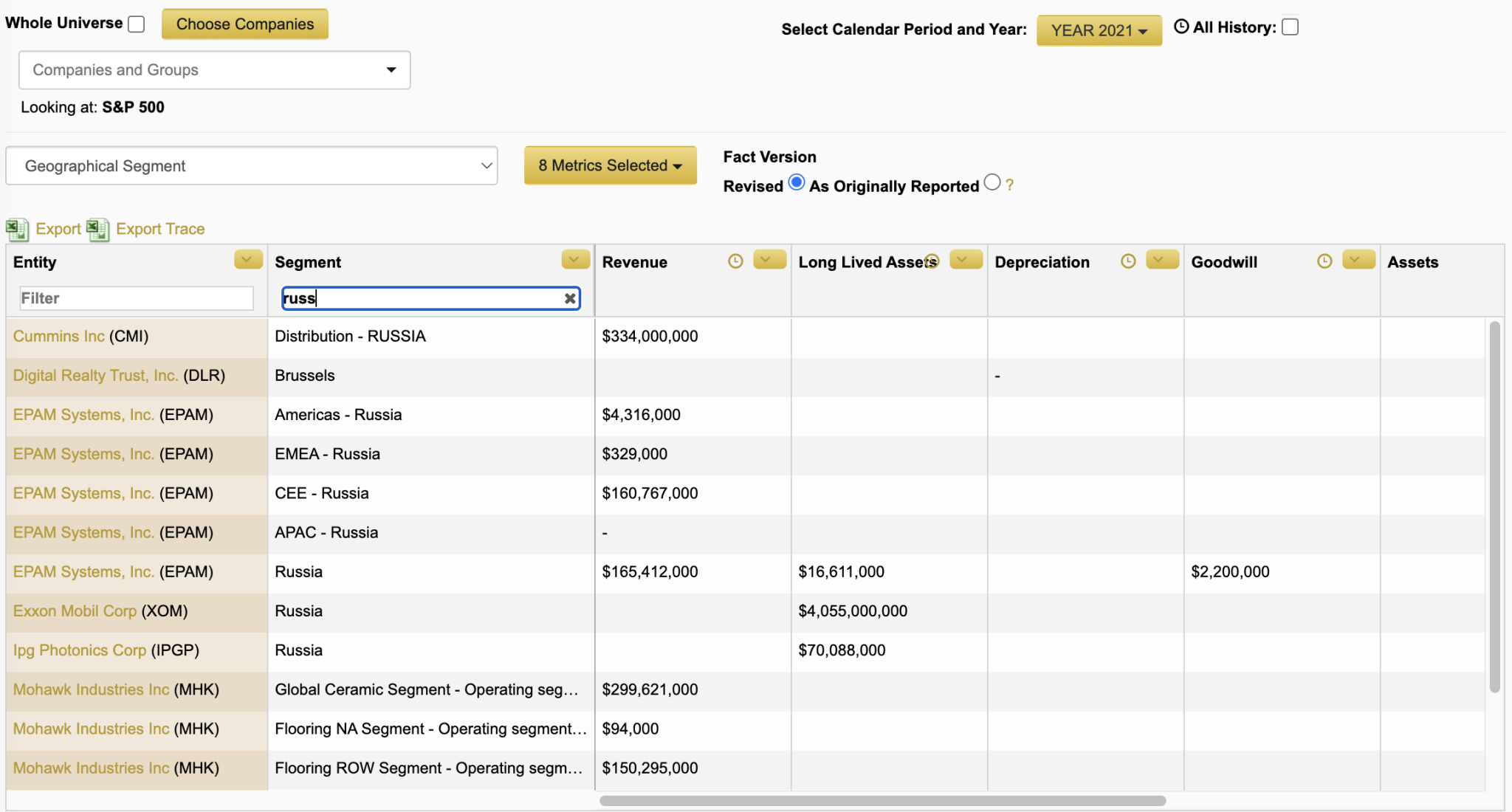 Be warned that relatively few companies make segment disclosures about Russia specifically (we found only seven in the S&P 500 for 2021), because most report Russia operations as part of some larger geographic segment such as Europea, EMEA, or Asia. You can always search those terms too, and you’ll get results; but they won’t necessarily provide much insight into Russia itself.

When you do find Russia disclosures, you can also use our Trace feature to go from the listed number to the specific footnote disclosure. For example, you can see in Fig. 1 that Cummins ($CMI) reported $334 million in distribution sales to Russia last year. We traced that back to the original disclosure and found this, Figure 2: 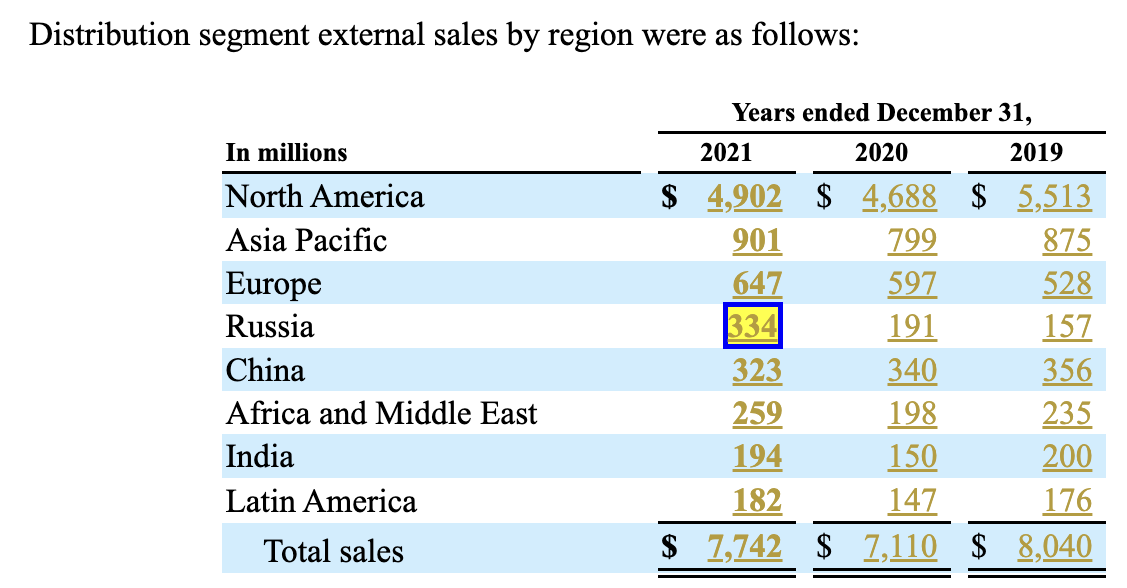 OK, Cummins had 4.3 percent of distribution sales in 2021 come from Russia — and that $7.74 billion is only a fraction of Cummins total revenue, which was $24.02 billion last year. So its Russia revenue really isn’t material, although clearly Russia was a growth country for Cummins; sales more than doubled in two years. Plus, as we said, there is the moral consideration of whether to keep doing business in Russia at all; and there may be regulatory questions soon enough if the Biden Administration enacts a total export control ban against Russia.

Anyway, that’s one example of how to use Calcbench to dig through Russia disclosures, to sharpen your questions for company CFOs and CEOs on the next earnings call.

Analysts can also use our Interactive Disclosures page to dig up footnote disclosures for what corporations are saying about foreign subsidiaries with ties to Russia.

Here, you need to first define your search group (say, the S&P 500), and then select “Subsidiaries” from the Choose Footnote/Disclosure Type pull-down menu on the left. You’ll then need to enter “Russia” in the text search field and check the “restrict to specified disclosure type” box immediately under the text search field. See Figure 3, below. (The “Subsidiaries” disclosure choice is near the top, in the section for 10K/Q disclosures.) 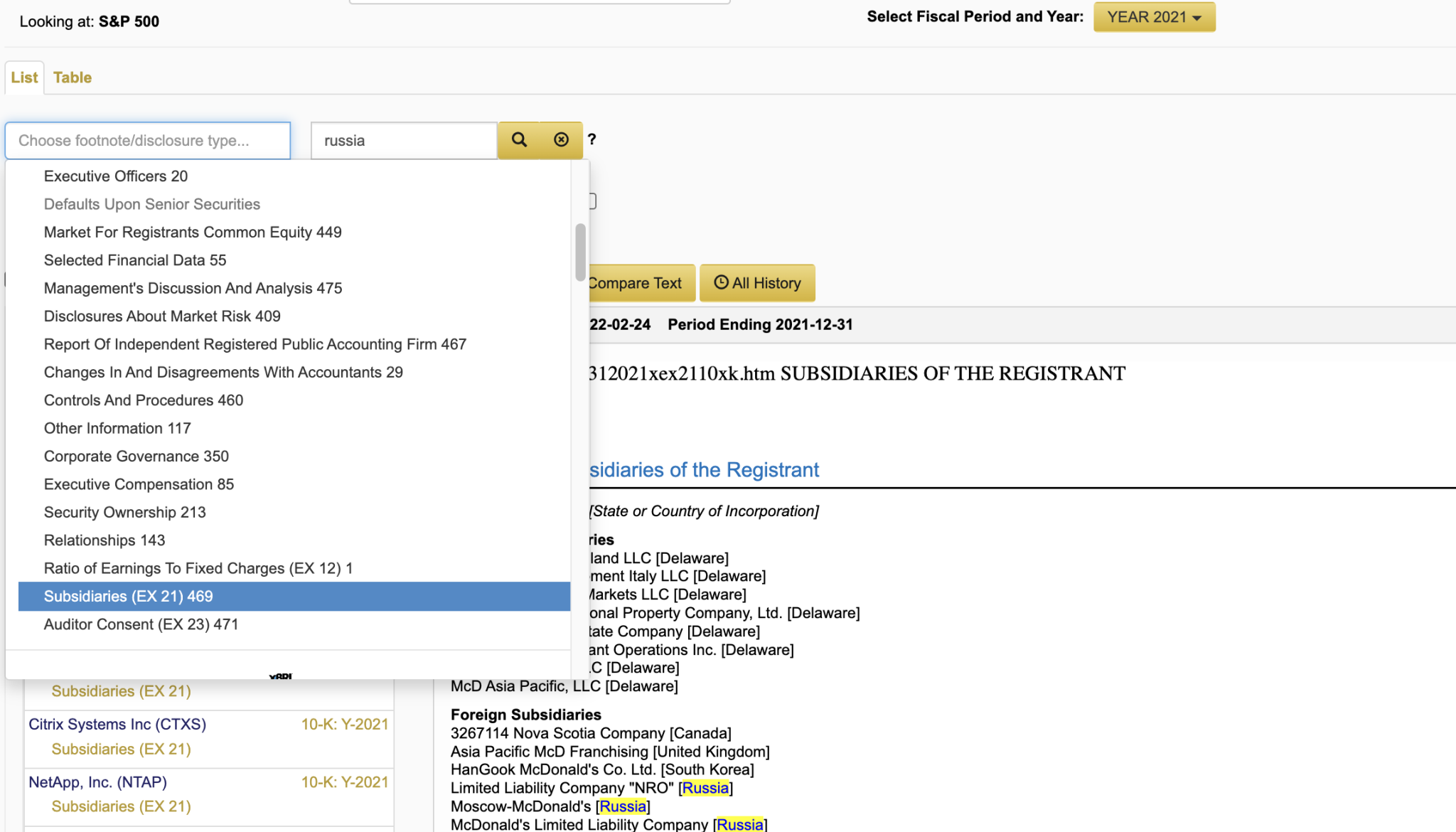 We did all that, and found 97 companies in the S&P 500 that listed Russia subsidiaries for 2021. That compares to 98 such companies in 2020, so the number had been holding steady through last year.

You won’t necessarily know any more about those subsidiaries, such as revenue, operating profit, or PP&E value, unless the company reports those numbers elsewhere — but you will have the subsidiary name, which gives you a start to ask more probing questions.

You can also use the Interactive Disclosure page to search for any disclosure about Russia. (That is, don’t restrict your search to mentions of subsidiaries or anything else.) That might be quite valid right now, in the immediate and chaotic environment, as companies start making observations about Russia in their Management Discussion & Analysis disclosures.

We might also see companies making 8-K filings in the near future as they announce divestitures from Russia projects or declare impairments for Russian assets they will no longer carry on the books. Citigroup, for example, coincidentally filed its 2021 10-K just yesterday, and disclosed a total of $10 billion it expects to write off in Russia. That’s not much for a bank with $2.3 trillion in assets, but given the political risks around Russia those details are still notable.

So we recommend that you check our Recent Filings page often, to find the latest from firms you follow.