SUMMARY: A handful of tech giants are spending staggering amounts of money on research and development. Calcbench tried to put that spending into context.

Corporate executives always say that spending on research and development is a high priority for their firm. Still, when you look at the numbers actually reported — it’s clear that a few select firms are responsible for a staggering amount of R&D spending, that dwarfs what many other firms spend on, well, anything.

We recently pulled the R&D numbers reported by 157 firms in the S&P 500 that have already published their fiscal 2021 financial statements. Altogether, those companies reported spending $301 billion.

The top spenders, shown below in Table 1, should be no surprise.

The five tech giants above collectively spent $114 billion in R&D costs, or 37.9 percent of all R&D spending for our entire sample of 157 firms.

Looking at R&D Another Way

But wait, you say! Is R&D spending measured in absolute dollars really such a useful metric? Wouldn’t R&D spending as a percentage of revenue be more informative, since that gives us a sense of how much the company is trying to innovate new products and services?

Fair point. So we recalculated the numbers to express that percentage — and got a very different set of results. See Table 2, below. 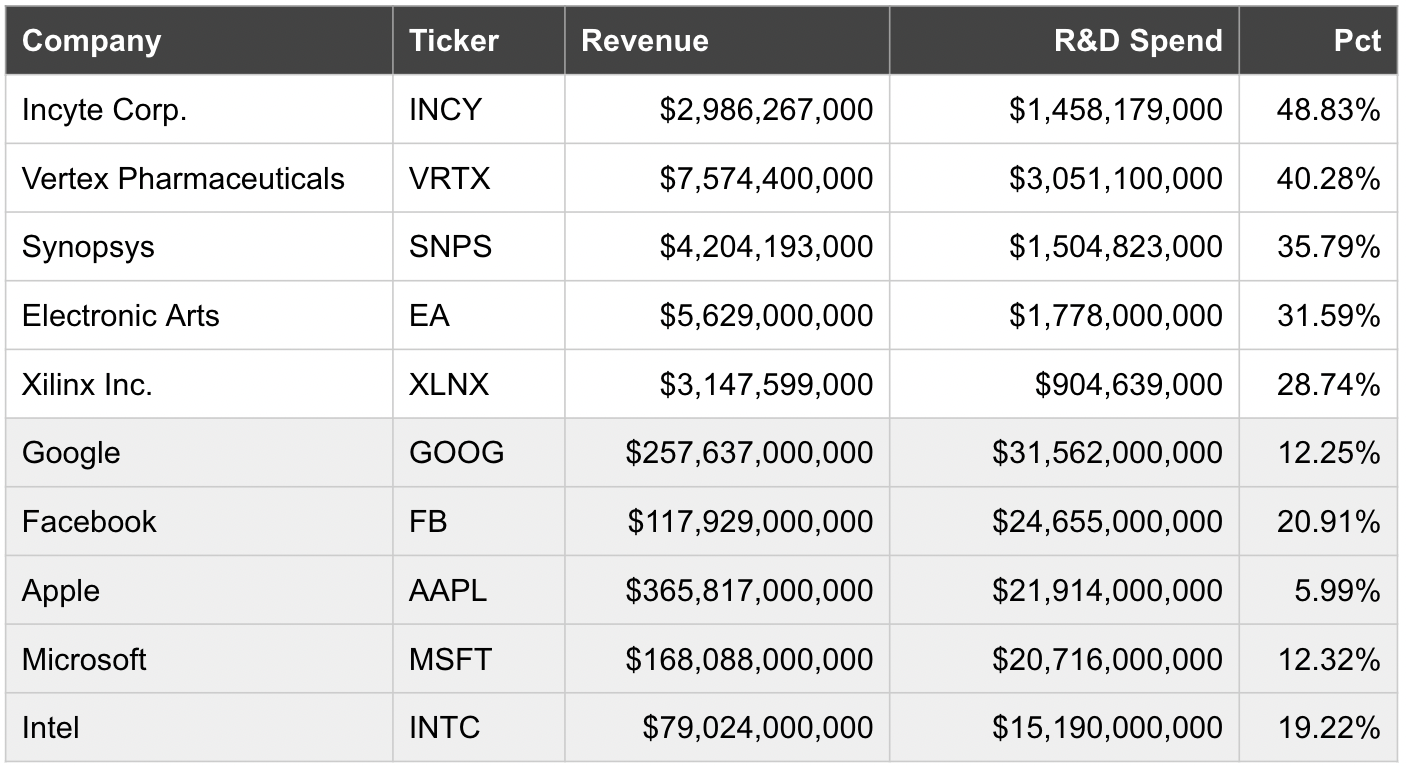 The results were so different that we added the tech giants in a second tier to give a sense of perspective; none of them come anywhere near this set of firms that devote significant portions of revenue to R&D. The results here do make a certain amount of sense; you’d expect pharma companies like Incyte and Vertex to spend boatloads on research, and likewise for semiconductor manufacturer Xilinx (which, by the way, was just acquired by AMD).

Back to the tech giants. Another way to understand their gobs of R&D spending is to express it per employee. So we did that, and found these results in Table 3.

Another interesting set of results, because Facebook spends more on R&D per person than any rival tech giant by far. Something to think about next time you see one of those commercials for its Metaverse and wonder what that’s all about; clearly the company is devoting a lot of money to that future, uh, whatever it is.

Astute observation! Nowhere on this list do we see that other tech giant, Amazon.com.

That’s because Amazon doesn’t break out and report its R&D spending like other firms. Instead, the company categorizes its R&D spending as “technology and content.” Why? Here’s how Amazon explained things to the SEC in a comment letter on the subject back in 2017.

Our business model encourages the simultaneous research, design, development, and maintenance of both new and existing products and services. For example, our teams are constantly working to build new Alexa skills and simultaneously maintain current skills, and these activities … are not easily distinguishable operationally. We focus on innovation and customer obsession and manage the total investment in our employees and infrastructure in order to improve the customer experience. We believe our technology and content presentation is most representative of the investments we make on behalf of our customers.

Um, whatever, Amazon; this post is already long enough so we’ll let your analysis speak for itself. For the record, however, Amazon did spend $56.05 billion on technology and content in fiscal 2021. That was 11.9 percent of its $469.82 billion in revenue, and only about $35,000 per employee. (Amazon has 1.6 million employees, reflective of its vast commercial operations.)