Today our series on SPACs (special purpose acquisition companies) looks at perhaps the most important question of all. Where do they spend the gobs of money they raise?

After all, remember the natural lifecycle of SPACs. They go public first, raising cash from investors in an IPO; and acquire an operating business later, where both entities are then reborn as a publicly traded operating firm.

Moreover, SPACs generally have 18 to 24 months to find their acquisition target and “de-SPAC” into that merged operating business. If the SPAC can’t close a deal within that window, it must (you may want to start breathing into a paper bag here) give the money back to investors.

So we wondered: how can one find those IPO dates and merger timelines? And how can we find details about any de-SPAC mergers that have happened so far?

First, find the filings for Khosla Ventures Acquisition in the Calcbench Interactive Disclosure database, and specifically pull up the Description of Business Operations disclosures. (That will always be the place to start when researching any SPAC.)

There, we can see that the Khosla SPAC was founded on Jan. 15, 2021. Four paragraphs down, one can also find that Khosla went public on March 8. That IPO generated proceeds of $345 million.

Next, we wanted to know how long Khosla had to put that money to work. So we just did a simple text search for “months.” Sure enough, several paragraphs further down we found this:

If the company is unable to complete a business combination within 24 months from the closing of the Initial Public Offering (the “Combination Period”), the company will (i) cease all operations except for the purpose of winding up; (ii) as promptly as reasonably possible but not more than ten business days thereafter, redeem the Public Shares...

That’s our answer. Khosla has until March 8, 2023 to consummate a merger with an operating company out there somewhere. When researching your own SPACs, you may also want to search for “years” or “18”, “24”, “two years” or similar terms. That should bring you to the detail you want to find.

OK, so the clock is ticking for Khosla to close a deal. Then we noticed that in addition to its Q1 2021 filings, Khosla also filed an 8-K on June 9. Had these folks already found a target?

The deal values Valo at $2.8 billion, and is expected to close sometime in the third quarter. It also involves numerous other firms investing $168.5 million in the resulting public company in a PIPE (private investment in public equity) deal, which is not uncommon to see in SPAC land.

Hold up, though. We don’t know purchase price allocation here because this de-SPAC transaction is still pending. What about prior deals from other SPACs? Can one find out those numbers?

In Calcbench, yes you can.

Start by going to our Segments, Rollforwards & Breakouts database. There, you can select the “Business Combinations - Purchase Price Allocations” option from the drop-down menu at left; and from the “Choose Companies” option at the top you can screen for all firms that use SIC code 6770 — the code for SPACs. To get the maximum amount of data possible, we also checked the All History button that’s on the top right.

Figure 1, below, shows what we did and some of the results. Note the history check-box and the disclosure choice, both circled in red; and our SIC 6770 screen, flagged with a blue arrow. 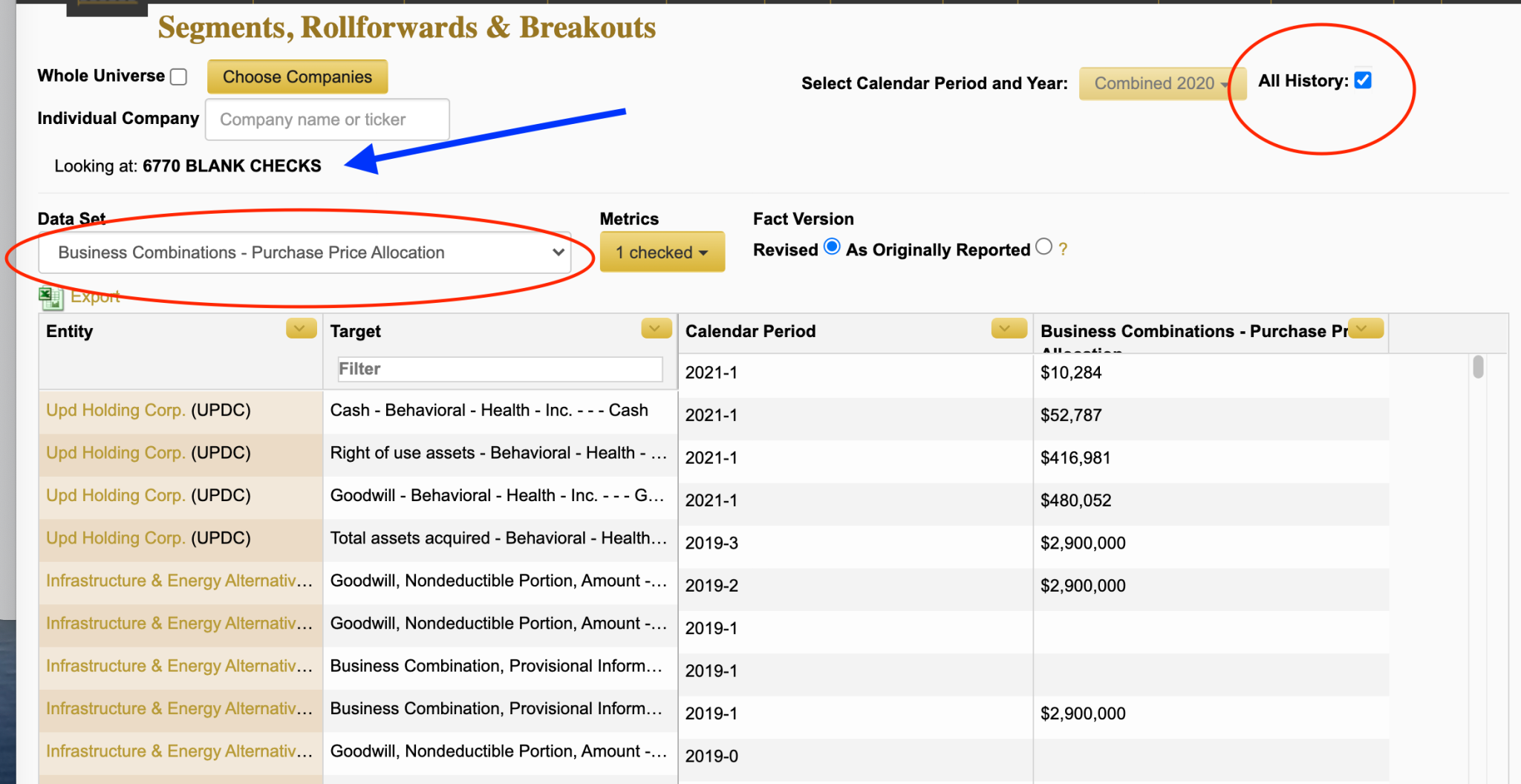 The results are the purchase price allocation by type, for each transaction. That’s why the first three results all look similar; they all pertain to an acquisition completed by UPD Holding Corp. ($UPDC) in the first quarter of 2021: cash, right of use assets, and goodwill.

So UPD apparently spent $480,052 to acquire a business earlier this year, and nearly $417,000 of that sum went to goodwill. To learn the exact details of this transaction, you can then hold your cursor over one of those line items and use the world-renown Calcbench trace feature to go to the full disclosure. Which we did, and we found this: 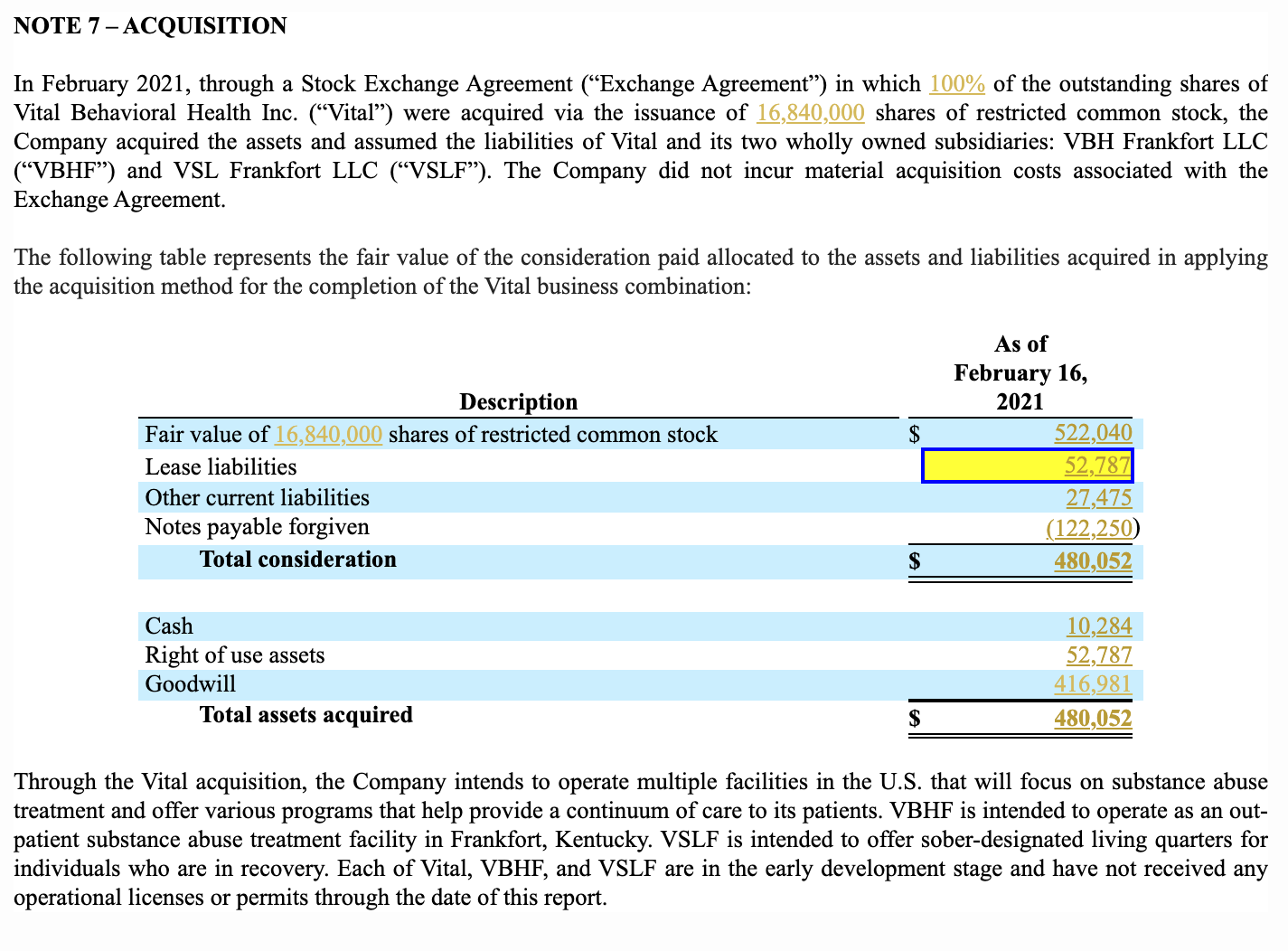 In February of this year, UPD agreed to acquire a drug treatment business in Kentucky, Vital Behavioral Health Inc. That business consists of one outpatient treatment clinic, and one residential facility for people in addiction recovery. On May 21, UPD detailed the purchase price allocation. Almost all of the $480,000 price went to goodwill, with a smattering paid in cash and right-of-use assets.

Read the fine print, however. You can see in the narrative disclosure that neither of Vital’s two facilities had any licenses to operate as of May 21. Hmmm. Moreover, if you then jump over to the business description for UPD, you can find that the business previously operated as a brewing company, Record Street Brewing, which UPD sold at the end of 2020 before getting into the addiction recovery business.

We’ll say no more about the merits of the UPD-Vital deal. Just understand that the data is out there, and Calcbench can help you find it.