Clorox and Its ‘Adjusted EPS’ Metric

The Calcbench research team is still digging out from a flood of corporate filings last week, but right away we wanted to note this one: Clorox Corp. ($CLX) filed an earnings release on April 30 that included adjusted EPS.

Why is that interesting? Because while firms might like to report non-GAAP financial metrics such as adjusted operating income or adjusted cash flow, you see adjusted EPS much less often. So let’s take a look at exactly what Clorox did here and what investors are supposed to make of this rather peculiar disclosure.

So how does the Clorox adjusted EPS metric compare against those three points?

That’s not disqualifying unto itself. All non-GAAP disclosures do need to be born sometime, after all. For whatever reason, Clorox decided that its report for Q1 2021 would be the period that this particular non-GAAP metric would make its grand appearance.

On the third point, about visual presentation to investors — no issues there, either. Clorox doesn’t even mention adjusted EPS in the headline or first few sentences of its release, and when adjusted EPS finally does get a mention further down, that sentence is in the same size and style as everything else. See Figure 1, below. 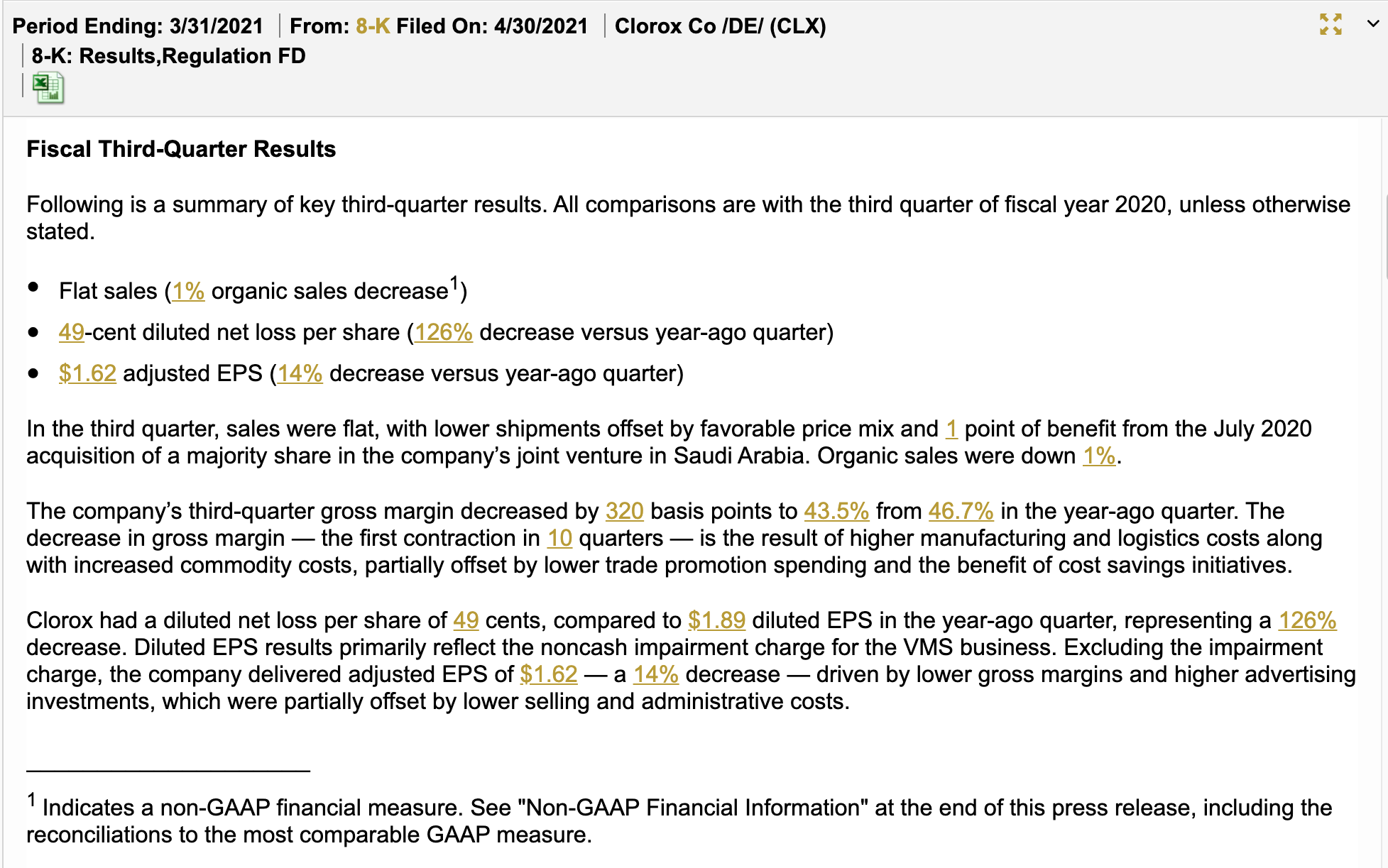 That still leaves us with the second point: how Clorox reconciles its adjusted EPS back to “regular” EPS.

Any earnings release that includes a non-GAAP metric must also include the reconciliation. It’s in there somewhere, always. To find it, Calcbench users can call up the earnings release in our Interactive Disclosure tool and then just keep on scrolling until you see it.

Alternatively, our Multi-Company page also lets you view adjusted net income (just search for “EarningsPerShare_NonGAAP”) for whole groups of firms. So if you’re looking at non-GAAP metrics there, you can always use our Trace feature, which will jump directly to the reconciliation for whatever firm you’re eyeballing at the moment.

Back to Clorox: sure enough, we find the reconciliation on Page 8 of its earnings release. The story is this: Clorox declared a $329 million impairment in Q1, related to goodwill and trademarks in the firm’s Vitamins, Minerals and Supplements (VMS) division. See Figure 2, below.

(You can see from Figure 2 that Clorox also reports an adjusted effective tax rate, which we’re not even going to get into today.)

That impairment intrigued us, so we bounced over to the goodwill footnote disclosures in Clorox’s 10-Q, which the company also filed last Friday. There, we found that the VMS impairment was due to…

“a higher level of competitive activity than originally assumed, accelerated declines in the channel where the business is over-developed, and higher than anticipated investments to grow the business, which have adversely affected the assumptions used to determine the fair value of the respective assets held by the VMS reporting unit.”

Clorox also included a table explaining how the $329 million impairment breaks down across several line items. See Figure 3, below.

Aside from Clorox introducing adjusted EPS to explain away its meh Q1 numbers, the company also offered an adjusted EPS estimate for future earnings in the rest of fiscal 2021 (which, for Clorox, ends on June 30). The company says it expects adjusted EPS to be $7.45 to $7.65 for the year, excluding that $2.11 EPS impairment charge and a $0.60 EPS gain on a one-time revaluation of a joint venture in Saudi Arabia.

Is all that OK with investors and the SEC? Not everybody is sure. The Wall Street Journal had an article today examining potential drawbacks for introducing such a metric, including several analysts who razzed the idea. (The article also cites Calcbench data, so you know it’s excellent.) The SEC itself might send Clorox a comment letter asking for further clarity on its maneuver, or in the worst case could tell Clorox to knock it off with this metric entirely.