Corporations and Paying No Taxes

You may have seen news last week of yet another research report declaring that a significant swath of Corporate America paid no federal income taxes last year.

This time around the report came from the Institute on Taxation and Economic Policy, which found that 55 large businesses paid zero to Uncle Sam in 2020 even while they reported a total of $40.5 billion in pretax income. ITEP’s report hit the interwebs on April 2, and was promptly picked up by the New York Times and other big media outlets.

Our only question: Everyone knows this data is readily available, right? Calcbench has been providing data on corporate federal tax payments — or the lack thereof.

That is, publicly traded firms need to disclose their federal tax expense or benefit in their quarterly reports. Those numbers are tagged as XBRL data, which means Calcbench can find them with just a few keystrokes.

For example, we pulled up our Multi-Company database page, and entered “CurrentFederalTaxExpenseBenefit” in the search field that page has for XBRL tags. Within moments, we found what all firms the S&P 500 paid in federal taxes for 2020. Those numbers are the same data ITEP used to compile its report. See Figure 1, below. 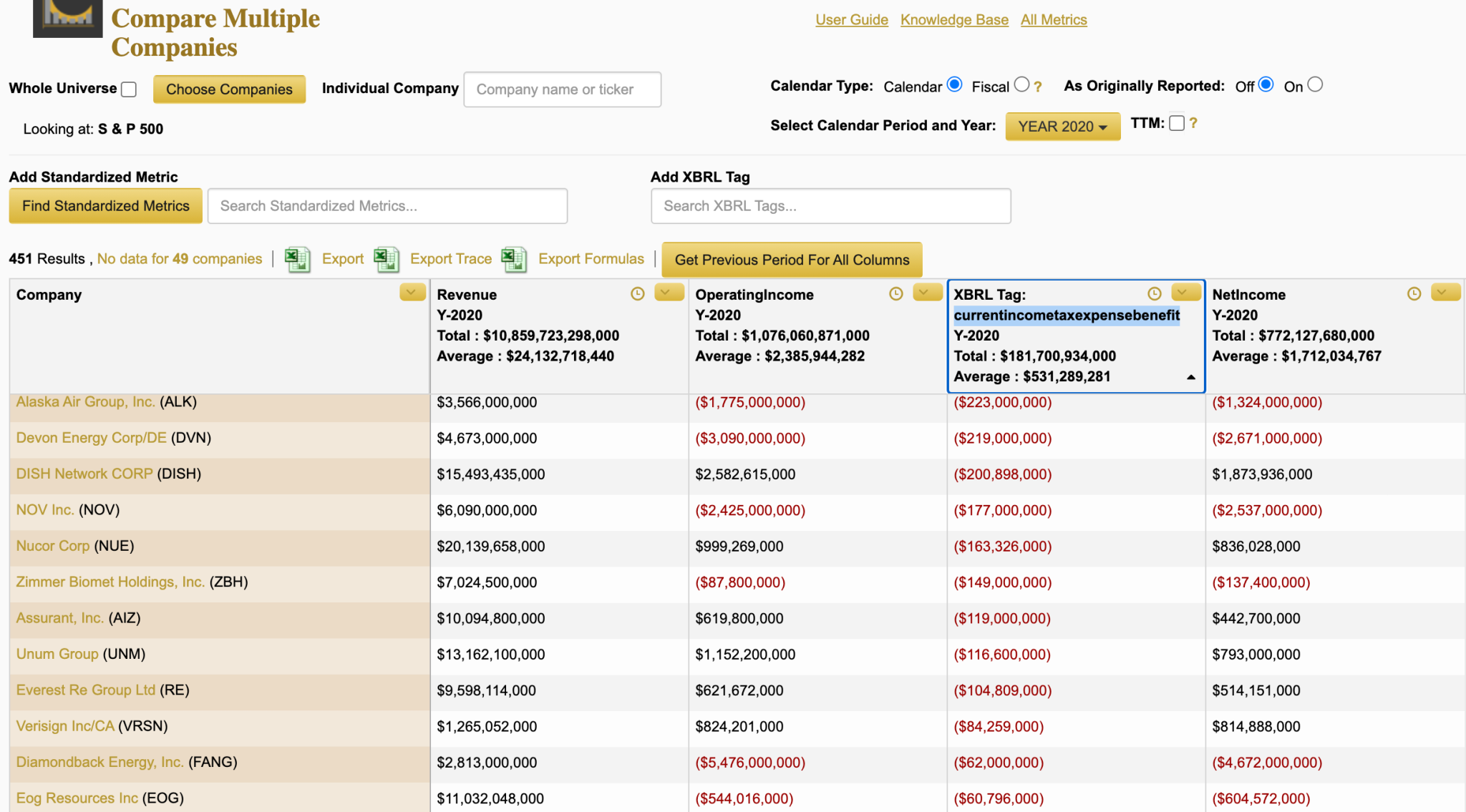 The third column denotes federal taxes paid. Notice that those numbers are all in red. ITEP is correct that scads of large firms paid no federal taxes in 2020 even though they generated gobs of pretax income.

For example, DTE Energy ($DTE) reported a negative federal tax expense of $247 million — meaning, the company actually received that amount back from the U.S. Treasury, rather than paid anything into it. That’s the number ITEP included for DTE in its report, and it’s also what we found with a moment’s search on Calcbench.

ITEP’s report flags 55 firms that received $3.5 billion back from the U.S. government in 2020 while also reporting $40.5 billion in pretax income. Not all of those firms are in the S&P 500, but they are all publicly traded, so they’re in the Calcbench data archives somewhere.

On our first (and rather naive) try, we found a total of 126 firms that had assets of more than $100 million, and that had reported domestic profits, and that had negative federal tax expenses in their fiscal 2020 year end filings.

Of course, much more goes into corporate tax analysis than a firm’s federal tax payment. Many firms that didn’t pay federal taxes did pay state, local, or international taxes. And tax management, where a firm claims various deductions, credits, and other maneuvers to lower its cash payment, is a time-honored tradition among corporate giants.

You can find details about a firm’s tax payments via our Interactive Disclosure page. Call up the firm in question, select its tax disclosure from the drop-down menu on the left, and start digging.