Whole Lotta SPACs Out There

So there we were, sitting around the Calcbench virtual breakroom, wondering how we should finish up the rest of the year. Then the intern piped up: “Why don’t we form a SPAC? Everyone else is doing it!”

Ummm, no, we politely told the intern. But he had raised an interesting point: how many groups are launching SPACs these days?

For those not in the know, Special Purpose Acquisition Companies (SPACs) are investment vehicles that investors with lots of money can use to take firms public quickly. The SPAC is essentially a publicly traded holding company, which then uses its funds to acquire operating firms. The acquisition closes, and presto — that target’s operations are now part of the publicly traded SPAC.

SPACs use a dedicated SIC code when filing financial statements. This means Calcbench can identify all the SPACs that have been cropping up lately, and see what revenues, operating income, assets, and liabilities these folks have been reporting.

First, a lot of SPACs have come onto the scene lately. Take a look at the numbers in Figure 1, below. 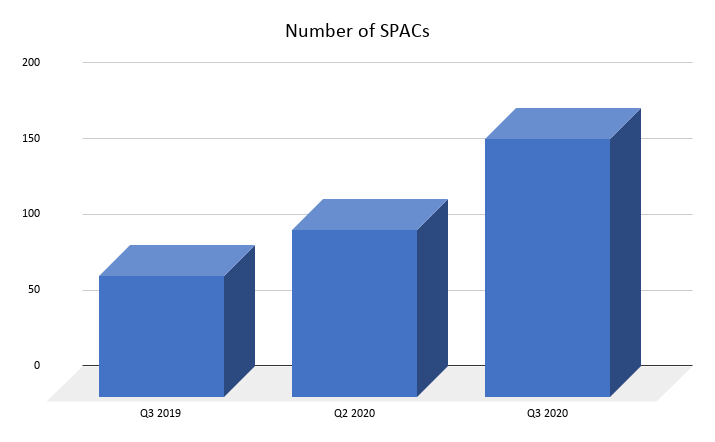 The number of SPACs filing statements with the U.S. Securities & Exchange Commission more than doubled in one year, from 80 firms in Q3 2019 to 170 in Q3 2020. Moreover, most of that surge happened in the last six months!

Then we peeked at the assets these firms have, since the value of assets is what drives a SPAC’s ability to make acquisitions. Here are some factoids to digest along with your turkey leftovers:

Of the 170 SPACs we found in Q3 2020, only 11 reported any revenue at all — and almost all of that revenue came from two firms! Infrastructure & Energy Alternatives ($IEA) reported $552.2 million, and AgroFresh Solutions ($AGFS) reported $52.8 million. No other SPAC even cracked $1 million in revenue.

The bottom line is that scores of SPACs have cropped up in the last six months. A fair number of them have a respectable amount of assets to pursue their acquisition dreams, but almost all of them are operating at a loss right now.

Who are these SPACs, and what do they want to do? You can use our Interactive Disclosures database to research specific firms and their filings, and some do tell a rather, um, interesting tale.

One of our favorites was Yacht Finders ($YTFD), which apparently launched in the early 2000s to act as an online database of yachts, matching buyers and sellers. By 2007 that business idea was taking on water, so the firm sailed into the SPAC business instead.

“The company’s business plan now consists of exploring potential targets for a business combination through the purchase of assets, share purchase or exchange, merger or similar type of transaction,” the firm said in its most recent quarterly report.

Well, that’s one way to keep your options open. Although as of third-quarter this year, Yacht Finders had no assets and no income.

Anyway, there are plenty of other SPACs in the sea. You can find them using the SIC code 6770, and then use our Interactive Disclosure page or our Multi-Company page to research any or all of them to your heart’s content.