Recap of Our Goodwill Webinar

As you all know because you hang on every word of this blog, Calcbench hosted its first-ever live webinar on Oct. 19 to discuss goodwill assets and impairments: why those things are important to financial analysis, how you can research data about goodwill, and what that data has been telling us lately.

You can view the entire one-hour discussion on YouTube if you like. Meanwhile, we wanted to review some of the big themes in that presentation and connect them to other goodwill examples we’ve seen lately.

First, our guest speakers Dan Gode of New York University and P.J. Patel of Valuation Research Corp. talked about the growth in goodwill assets on the corporate balance sheet generally.

In general, that growth should not be a surprise; over the last two decades, M&A activity has inexorably tilted toward more knowledge-based businesses and industries, where goodwill can account for a significant portion of the value that an acquisition target brings. So one should expect goodwill to become a larger part of the balance sheet.

Second, while goodwill impairments do happen, those write-downs do tend to take some time to emerge. As Patel noted, after a deal closes, executives typically need several years to achieve the “synergies” so breathlessly promoted at time of acquisition— or, perhaps, to conclude that those synergies aren’t as bountiful as first presumed. Then impairment enters the picture.

As fate would have it, while we were writing this post, health insurance giant Centene Corp. ($CNC) filed its quarterly report for Q3 2020. Included in that report were details of Centene’s acquisition of WellCare earlier this year for a total of $19.55 billion in cash and stock — where goodwill accounted for $11.71 billion of that amount.

You can see the purchase price allocation here, with goodwill listed at the bottom: 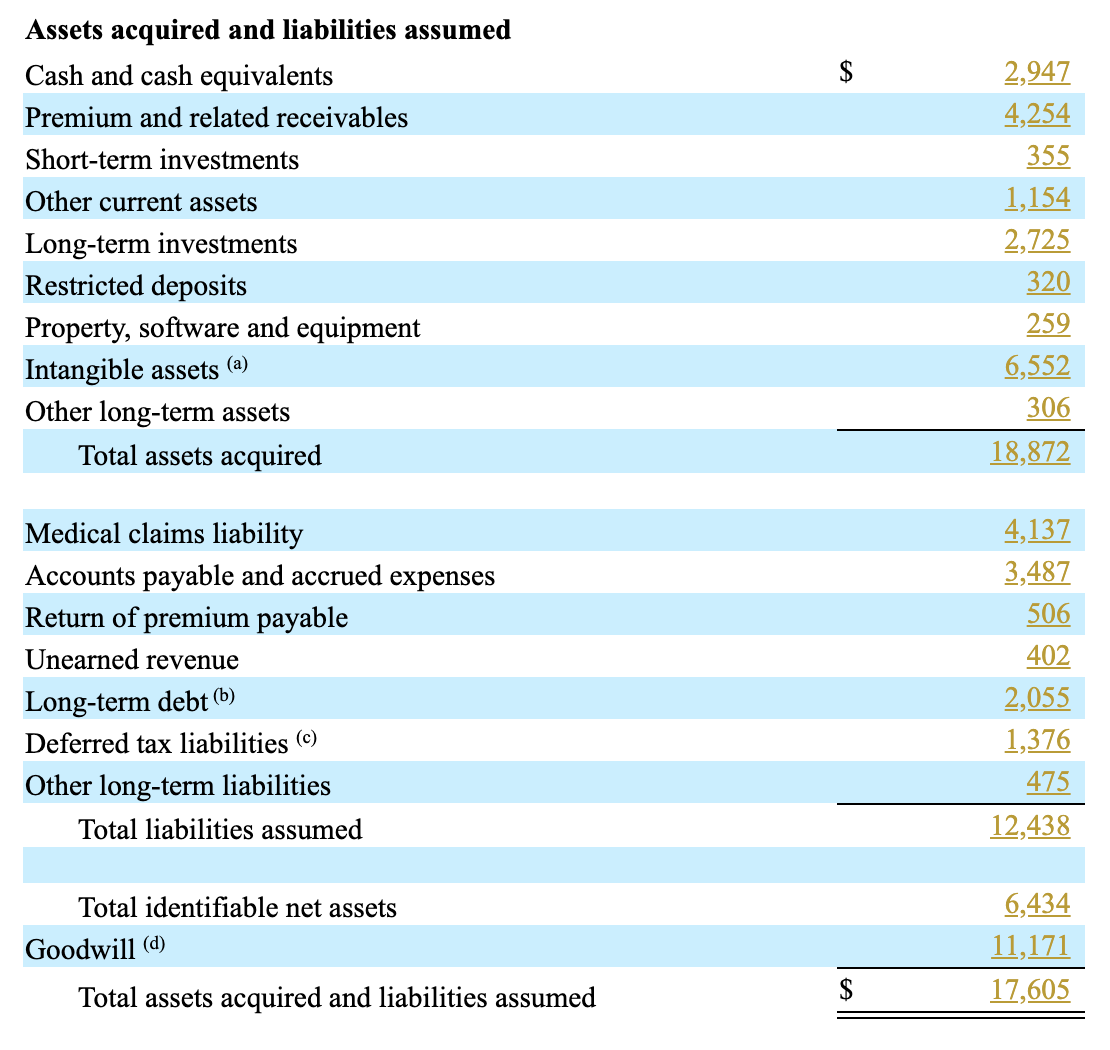 So why did this example of goodwill intrigue us? Because in the footnotes below the table, Centene management had this to say about that $11.71 billion:

Goodwill is estimated at $11,171 million and primarily relates to synergies expected from the acquisition and the assembled workforce of WellCare. The assignment of goodwill to the company’s respective segments has not been completed at this time, but the majority of goodwill is expected to be allocated to the managed care segment.

Synergies! Mentioned right there in the first sentence of the disclosure!

We cannot speculate on how skillfully Centene will or won’t extract those expected synergies. Our points are only that (1) an analyst should always check back on announced acquisitions, because purchase price allocation (like Figure 1, above) often isn’t reported until one or two quarters after the breathless press release; and (2) always read the footnote disclosures, because that’s where the juicy stuff like purchase price allocation gets reported.

Anyway, Back to Our Webinar

The Centene example above just streaked across our radar today on our Recent Filings page. In our webinar, we examined the goodwill balances of Analog Devices ($ADI) as well as Roper Technologies ($ROP). Analog is fascinating because most of its goodwill is tied to one large acquisition the company closed in 2017; Roper is interesting because it has done many smaller deals over time.

We also talk about how coronavirus has affected goodwill impairments, and whether it will keep affecting impairments in the future. (Short answer from our speakers: probably not.)

As always, Calcbench subscribers can choose your own goodwill adventure when sifting through our database archives:

And just because we’re so proud, here’s our webinar that you can play right here and now. Enjoy!