Covid-19 was inevitably going to cause economic strain and lead companies to impair the assets carried on their books — everyone knew that already. Then the situation got even more difficult, with the price of oil crashing and leaving oil & gas companies bracing for impairment too.

Now, as more first-quarter reports keep coming, we are starting to see just how large those impairments are.

As of May 8, Calcbench had found 51 firms in the S&P 500 declaring asset impairments. The group split roughly in half: 25 firms impairing goodwill assets, 26 impairing other assets but not goodwill.

The total breakdown among the 51 firms is as follows: 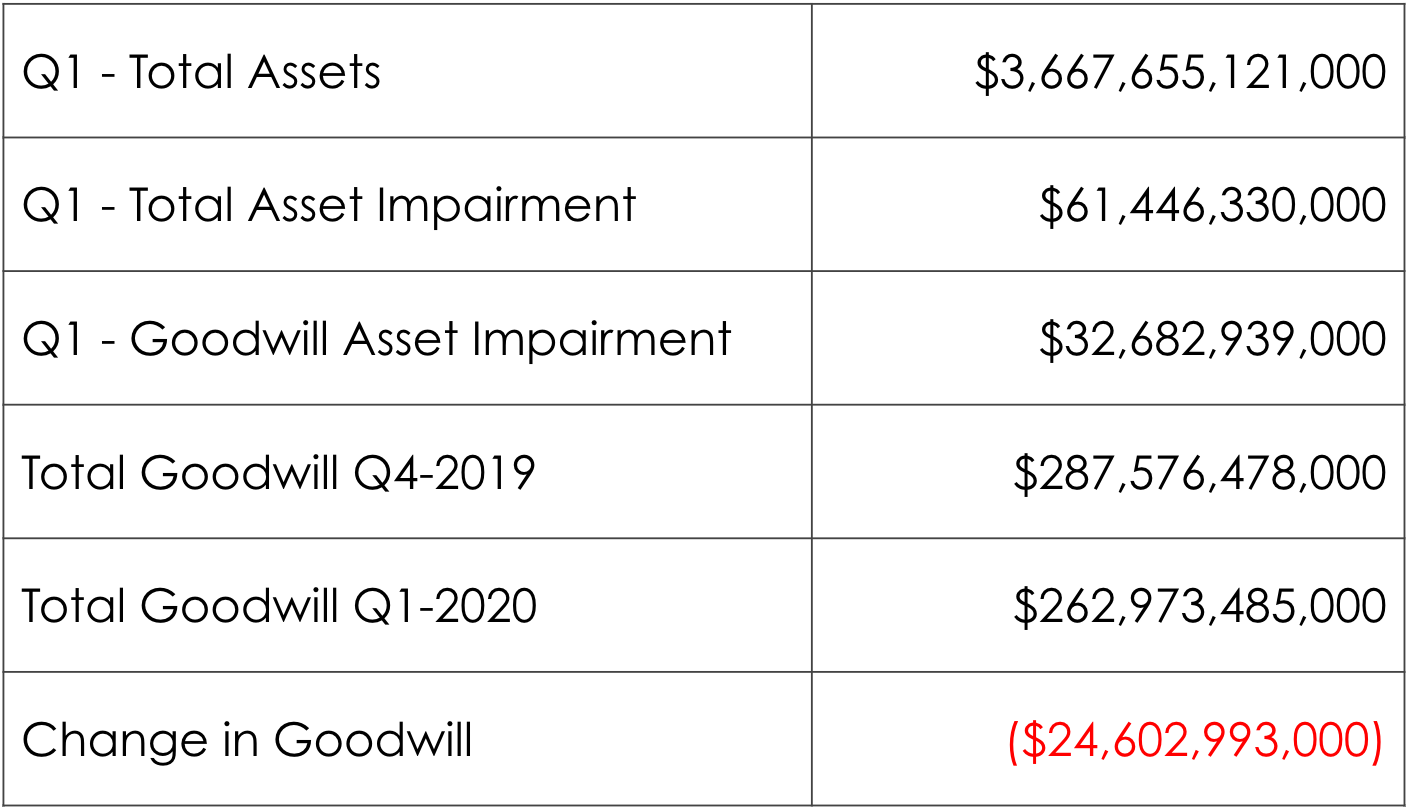 These numbers tell a few different stories, depending on how you look at them.

First let’s look at that $61.45 billion in total impairments. That amount is 1.68 percent of total assets for the firms — but total assets still actually rose from fourth quarter 2019, when total assets were $3.15 trillion. So yes, large firms were racking up asset impairments, but they were still increasing overall assets even faster.

Will that protection of total assets last in later quarters this year? We don’t know.

You may ask — if companies impaired $32.68 billion in goodwill, why was the total decline in goodwill only $24.6 billion? Because several firms were adding some goodwill assets at the same time they were impairing others. At the end of all that arithmetic, the net difference is a decline of $24.6 billion.

Six weeks later, however, the company declared an impairment on that same deal:

As a result of the significant decline in equity market valuations that occurred during the period between our acquisition of ICG in January 2020 and March 31, 2020, we determined that an event-driven goodwill impairment test was appropriate for the ICG goodwill, which resulted in an impairment totaling $20.2 million.

This means Pulte still carries $20.5 million in goodwill on its books from this acquisition.

Pulte stressed that the impairment “reflects the broad-based declines in the market capitalizations of publicly-traded construction companies in the short period of time since the acquisition,” rather than any problem or surprise specific to ICG.

Pulte’s impairment is a good example for another reason. Usually firms review their assets every fourth quarter to report possible impairments in their annual 10-K. Under extraordinary circumstances, however — like, we dunno, a global pandemic strangling economic activity or the collapse of oil prices — a firm may decide to declare impairments during an interceding quarter.

And for a firm to record an asset and impair it within the same quarter — well, wow. That’s as rare as a covid antibody test that actually works.

Pulte is, however, a harbinger of impairments to come. We only found 51 firms declaring impairments so far this quarter, but by no means are they the last.