A Look at Cost of Goods Sold

Calcbench occasionally likes to step away from coronavirus analysis, so today we’re going to revisit one of our favorite macro-economic issues: cost of goods sold by Corporate America.

Why? Because we’ve always kept one eye on the U.S.-China trade war, and how tariffs on various goods and materials coming into the United States have pushed up costs for companies selling finished products. For example, back in 2018 we found that cost of goods sold (COGS) was rising faster than revenue — a condition that inevitably pinches operating profit.

So what’s been the larger trend of COGS among the S&P 500? We investigated.

In Figure 1, below, you see the increase in cost of goods sold for 388 firms in the S&P 500 from 2015 through 2019. These were firms that reported COGS in all five years. Collectively their costs rose 15.72 percent, from $5.31 trillion in 2015 to $6.3 trillion in 2019. Note the pronounced acceleration in COGS that began in 2017, coinciding with the arrival of the Trump Administration and its more aggressive use of tariffs. 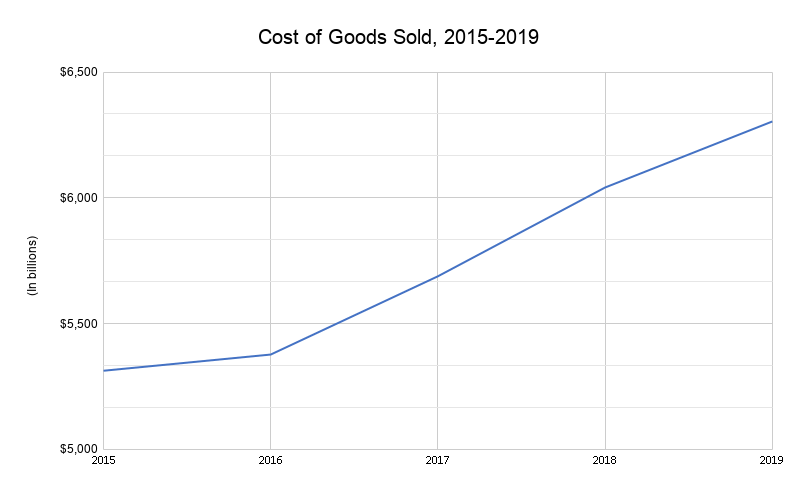 OK, but that’s the collective direction; and some of that trend might be driven by outlier firms whose COGS changed drastically because of mergers, divestitures, or other factors. 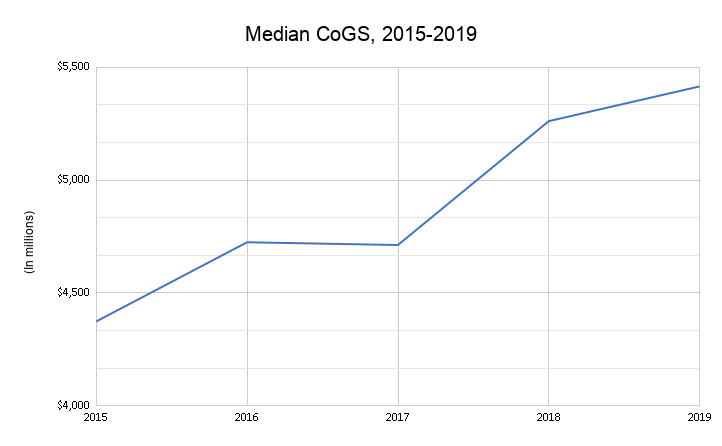 Again, you can see a pronounced increase that coincides with the Trump Administration’s arrival in 2017. Of course that increase isn’t entirely due to tariffs. The economy was humming along quite nicely in the late 2010s and demand for goods was rising around the world; so at least some of the COGS increase just came from generally higher demand for components and raw materials. But plenty of firms also said in recent years that tariffs did increase their costs, so it’s a factor to at least some extent.

At the firm-by-firm level, we also discovered some interesting nuggets.

For example, motorcycle maker Harley-Davidson ($HOG) actually saw its COGS decline 2.3 percent over the last five years — but that’s only because sales declined even faster (down 10.5 percent) over the same period. So the company was buying fewer raw materials, but those materials were more expensive thanks to tariffs.

Contrast that example to Caterpillar ($CAT), which saw its COGS rise by 8.4 percent. Revenue, however, grew by 14.4 percent, giving Caterpillar at least some breathing room to protect operating profit even amid higher materials costs.

Even tech firms were paying more for the services they sell. For example, Google ($GOOG) saw its COGS jump by 60.8 percent. Then again, Google’s revenue also more than doubled, from $75 billion in 2015 to $161.9 billion last year.

And right above Google was Salesforce ($CRM), whose cost of goods sold jumped 60.9 percent — but Salesforce’s revenue nearly tripled, from $6.6 billion to $17.1 billion. So the tech giants aren’t sweating COGS too much.

You can conduct your own research on COGS via the Company-in-Detail or Multi-Company database pages, to give you a sense of the raw numbers reported. Then hop over to the Interactive Disclosures page for whichever firms have caught your eye, and you can find out exactly why those costs were rising or falling by looking into the footnotes.