Microchip maker Jabil Inc. filed its latest quarterly report last week, where it gave details of a restructuring plan expected to cost the company $85 million over the course of fiscal 2020.

Analysts who follow Jabil might be thinking, “Wait — wasn’t this company already in the middle of a restructuring plan? Hasn’t it been reporting restructuring costs already?”

Correct on both counts, astute Jabil observers. In fact, the company has been in the midst of one restructuring plan or another since 2013.

We noticed this in Jabil’s filing from Jan. 3, for the quarter ending Nov. 30, 2019. That’s when Jabil began detailing some of its expenses relating to the 2020 Restructuring Plan it had announced last September. See Figure 1, below. 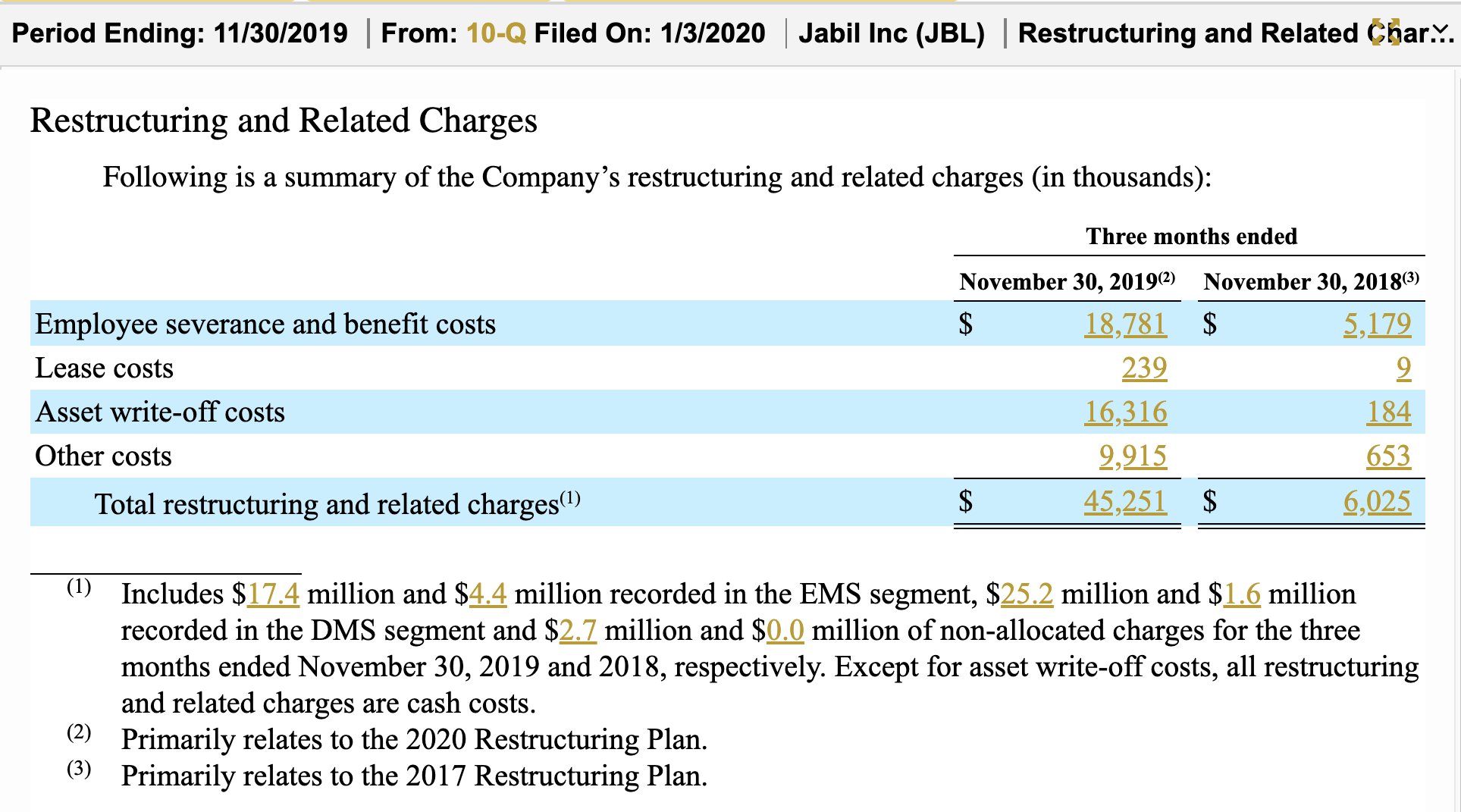 The 2020 costs are shown in the column on the left, for the period ending 30 Nov. 2019. Further down the filing (but not shown here) Jabil says this is these expenses are the first phase of its 2020 Restructuring plan, which should cost $85 million.

Fair enough, but we were more intrigued by the column on the right: that $6.025 million related to Jabil’s previous 2017 restructuring plan.

What was that about? How much did that plan cost? And how much did Jabil expect the plan to cost when the company first announced it three years ago?

Calcbench likes to follow restructuring costs because we’ve seen numerous instances of filers estimating one amount of cost at the beginning of a restructuring plan, and ultimately reporting a different amount at the end of the plan.

Kimberly Clark Corp. ($KMB), for example, announced a restructuring plan in 2018 whose costs in the first year ultimately were less than originally estimated. (How will 2019 costs fare? Ask us again in a few months.) At the other extreme, Hewlett-Packard ($HPQ) went through a restructuring in the first half of the 2010s where total costs and layoffs by 2015 were nearly double what HP originally expected in 2012.

Jabil seems not to have that issue about changing costs. We used the Show All History tab at the top of the disclosure viewer to call up its previous statements about restructuring charges. The company announced its 2017 Restructuring Plan in late 2016 and estimated the total cost would be $195 million.

Sure enough, three years later Jabil announced the end of that plan, and total costs were $195 million. The $6.025 million in Figure 1 was the last of it.

But wait! While we were time-traveling backward through Jabil’s disclosures, we noticed that when the company announced the beginning of its 2017 Restructuring Plan, it was also announcing the conclusion of a 2013 Restructuring Plan.

So we went all the way back to Jabil’s 10-Q from July 2013, when the company disclosed its very first restructuring plan. There, deep amid the text, using our hieroglyphics decoding technology, we found this:

The company currently expects to recognize approximately $188.0 million in pre-tax restructuring and other related costs over the course of the company’s fiscal years 2013, 2014 and 2015 under the 2013 Restructuring Plan.

Four years later, however, in summer 2017, we found this statement:

The company currently expects to recognize approximately $179.0 million in pre-tax restructuring and other related costs over the course of the Company’s fiscal years 2013 through 2018 under the 2013 Restructuring Plan.

Is that a legit strategy? It’s not our place to say. Restructuring charges are supposed to relate to one-time actions a firm normally wouldn’t undertake, to align operations to new (usually diminished) business circumstances. Examples would be a plant closure, or integration of two sales forces with attendant layoffs, or something like that. Restructuring costs are often a reason why firms report adjusted earnings: because the costs are one-time items not reflective of normal business operations.

But how many restructurings can a company report before all those efforts are just, ya know, the normal course of business?

That’s an excellent question for financial analysts to ask a CFO during an earnings call. Calcbench is just your humble servant, giving you the right data so you can ask the right questions.