Calcbench last looked at the legalized weed business in May, when we noted the run-up of inventory that many Canadian marijuana businesses were disclosing.

We meant to revisit the inventory issue again in November after another wave of filings — but, um, we spaced on the date. We finally took a fresh look at those inventory numbers this week, and suffice to say the overhang issues continue.

If a single chart can tell the tale, it is this comparison of inventory and revenue from Tilray ($TLRY), one of the larger Canadian cannabis companies today. 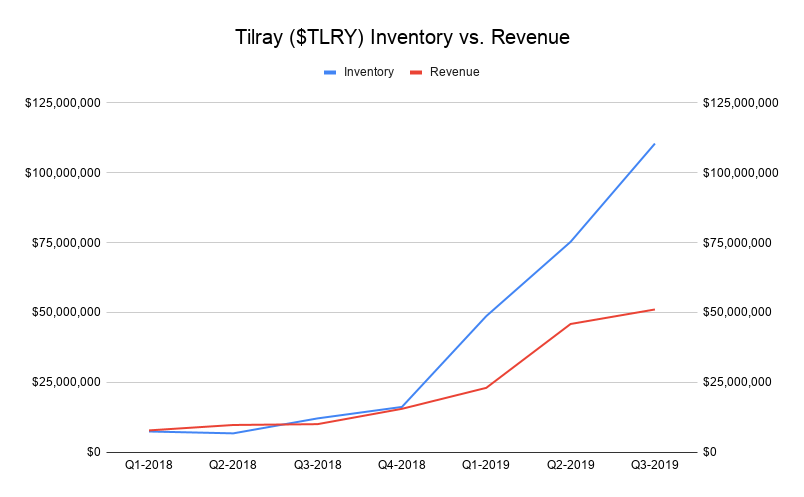 That’s not good when your product is literally intended to go up in flames. No wonder Tilray stock has gone from a high (no pun intended) of $49.30 on July 1 to around $17 these days.

Other major Canadian cannabis players such as Cronos Group ($CRON) or CannTrust Holdings ($CTST) report similar challenges, although they don’t file quarterly statements like Tilray so we can’t conjure up the same nifty charts.

As a Wall Street Journal article noted in November, “The largely Canada-based cannabis sector has struggled as demand has failed to emerge as expected after the country legalized recreational marijuana last year. Oversupply has weighed on cannabis prices, forcing write-downs.”

You can see that in the filings, typically in a weed company’s disclosures about inventory. Tilray, for example, wrote down the value of its Q3 work-in-process inventory by $201,000, on a total value of $81.3 million.

What does all this mean for Calcbench users who follow weed companies?

Above all and as always, read the disclosures. We have them all, tagged and indexed via our Interactive Disclosures page. That’s where you can find items like adjustments to inventory, as well as management statements about big plans to achieve future growth.

CannTrust, for example, has extensive disclosures about how it values its “biological assets” — because, as the company blandly notes, “there is no actively traded commodity market for plants and dried product.” So CannTrust needs to estimate the fair market value of its weed, and therefore shares all sorts of estimates about harvest yield, value per gram of final product, and the like. Cronos does the same.

You can also find some interesting management rationale for the overhang, and plans to achieve stronger growth. Tilray, for example, is plotting more sales in Europe while the Canadian market splutters along.

All you need to do is dig in.