Calcbench was on the road this week, visiting Washington to attend the AICPA’s annual conference on SEC reporting issues. There, a parade of panelists from the Securities and Exchange Commission talked about all things financial data — including non-GAAP data that firms try to report and the SEC watches closely.

Contribution margin is calculated as sales minus variable costs. Those can be items such as labor, the expense of running machinery, or any other cost that would typically rise or fall in step with the volume of sales. (Compared to rent, for example, which is a fixed cost.)

Contribution margin’s biggest claim to fame is that WeWork tried to use that metric to woo and wow investors — and stretched its calculation of contribution margin so far that the SEC told WeWork to drop the disclosure from its IPO documents. Which presaged things to come, since WeWork eventually dropped the IPO entirely.

At the AICPA conference, several SEC officials talked about the perils of contribution margin and how firms should not push their math too far, lest they get rebuked like WeWork.

So we wondered: how many firms report contribution margin, anyway? In what context?

Well, you can find those answers via our Interactive Disclosures page. Just create some peer group you want to review, and then enter “contribution margin” in the text search box on the right side of the page.

For example Cloudera ($CLDR) includes contribution margin in its segment disclosures. Its definition of the term: “segment revenue less the related cost of sales excluding certain operating expenses that are not allocated to segments because they are separately managed at the consolidated corporate level.”

Er, not quite. Then, per SEC rules, Cloudera reconciled its contribution margin back to the most appropriate GAAP metric, which is operating income — or, in Cloudera’s case, loss from operations. Take a look: 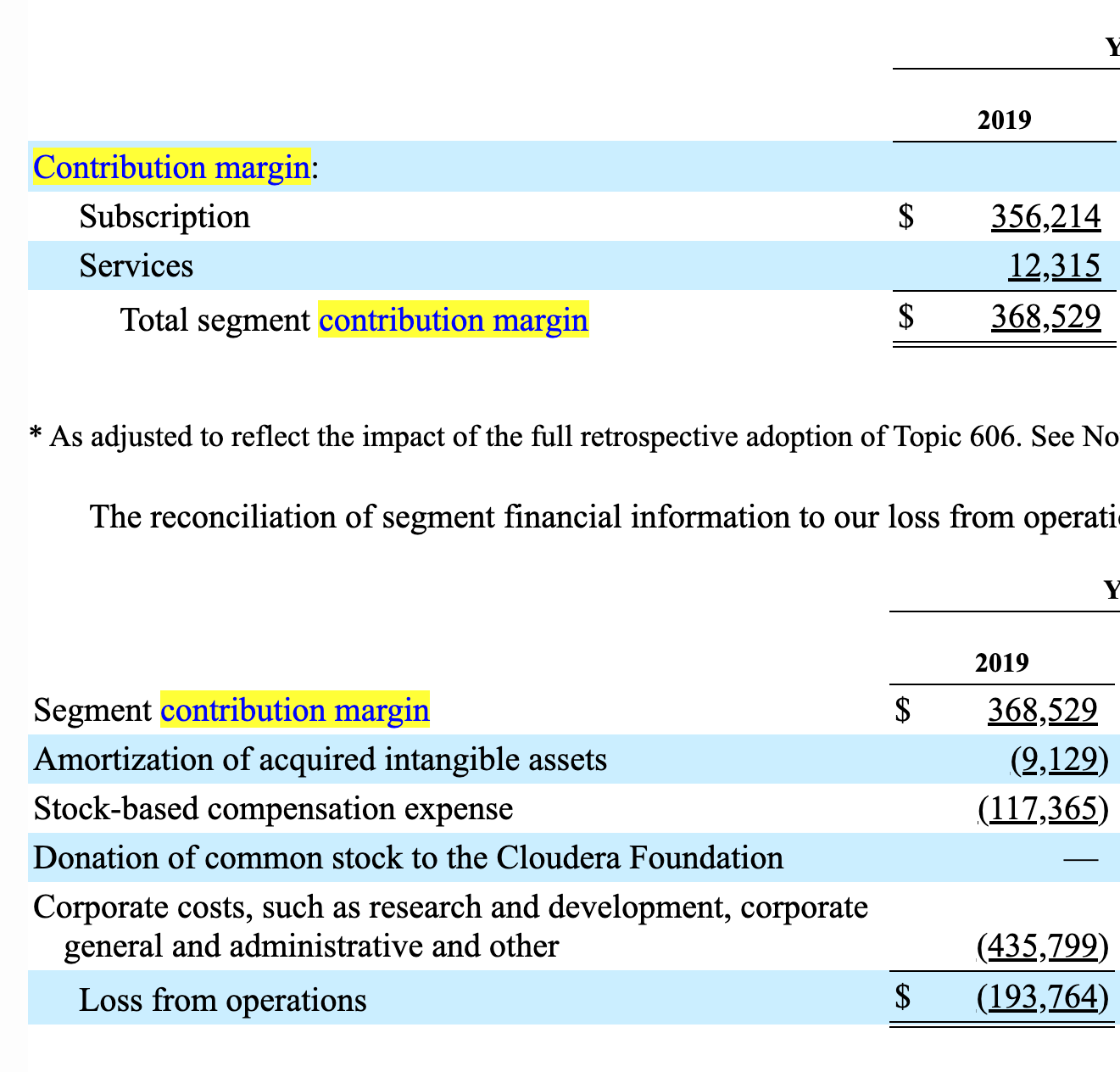 As we can see, despite those rosy numbers in Cloudera’s non-GAAP numbers, the company actually lost money according to good ol’ Generally Accepted Accounting Principles.

All of this is legal, of course. So long as a firm defines a credible, plausible non-GAAP metrics that informs investors, and reconciles that non-GAAP metric with its closes legit GAAP counterpart, the SEC will allow it. WeWork went overboard with its cockamamie non-GAAP metrics, but many more firms manage to stay on the SEC’s good side.

The question for analysts is how to assess contribution margin — including the possibility that company management is hoping to distract you with glitzy talk about contribution margin so you’ll overlook those red-ink numbers in operating or net income.

The details are always in the footnotes, people. Calcbench can help you find them.